Busy Thursday, The Gang is Together Again

Pilot Knob RV Resort, Winterhaven, CA
Thursday, Feb. 20th we weren’t in too big of a rush getting up. It was close to 7 when we did. I thought Bill would be walking with me so I waited but after 7:30, he indicated that he didn't feel like it. No problem, off I went. It was a mild 64F/18C this morning already and the winds were between 7 – 15 mph. I didn’t need to layer up this morning but perhaps a ball cap would have kept my hair in place.


I did a mile and a half today and had thought if Oreo was out, that I would ask Keith if I could take her for a walk through the gate and into the desert. She wasn’t out so that thought was abandoned. Back home, I had my tea and Bill was getting washed up for the day. His car model is coming along nicely and every so often, he adds something else to it. While I drank my tea, he did a bit more. At 9:15, I asked him about bocce ball and yes, he was going to play.

We wanted to take a drive back to Pilot Knob’s blm behind and west of us so only played until 10:45. I did well today, my first two games were winners. I had good partners and we had a lot of help from members not on our team! There were only enough players for one court today with about 4 spare players. Gordon does well, making sure everyone plays at least every other game and sometimes, twice in a row.

Bill and I walked back and hopped in Black Beauty. We took a chance, drove back to the free area and saw the Mansion but no Ken and Shirley. They didn’t know we were coming and the unexpected tour/visit didn’t pan out. Maybe early tomorrow before they leave it will work out. We returned home and each had a bowl of oatmeal. I had some crushed walnuts and cottage cheese with mine so it would sustain me for longer. Then, I texted Kim that we were ready.

They invited us along to the Arizona Market. Bill needs some t-shirts so we’ll have a look and see what we can find. He likes the plain ones, preferably with a pocket and naturally, a good deal. I’m not looking for anything in particular – at least until we return to Hobby Lobby. That’s what I’m saving my $$ for. We were picked up at 12 noon and Ken headed to the market. ‘To market, to market, to buy a fat pig’ – well, I got a similar reaction when I sang it to the other 3 too.

We’ve never gone in the afternoon so shouldn't have been surprised that the parking lot was very full and there were many people in every booth and walkway. It didn’t interfere with our shopping.

Bill and I first found him some t-shirts at a great price and then Kim and I went on the hunt for some new tops for her wardrobe. I tried a few on too but I wasn’t really needing tops. 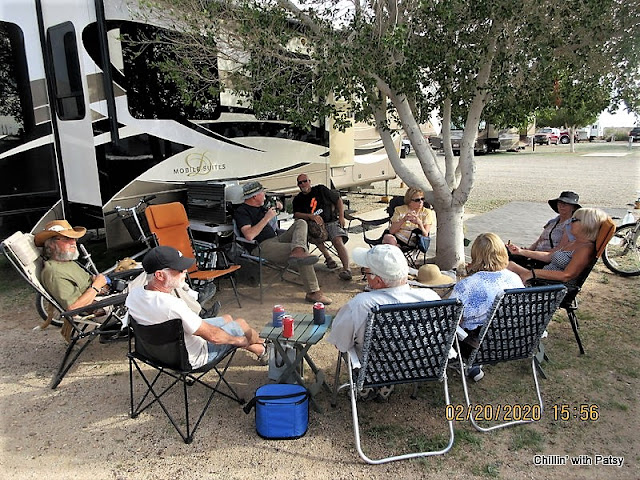 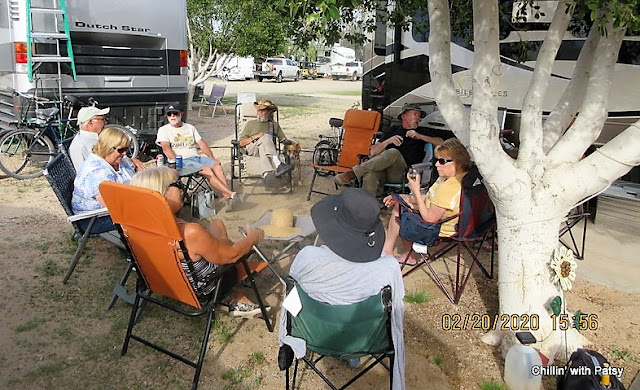 We headed back home and arrived in the park around 2:30. We had invited the winter 'gang’ for Happy Hour today at our site so I swept the leaves off the patio mat and moved our chairs and tables into the shaded area here. Dave and Cheryl arrived first, then Kim and Ken. Ken and Shirley pulled up followed by Doug and Yuma, then Keith rode up on his bike. We were all here together again. Last time was at Quartzsite, so it was due time!

Conversations flowed, in groups of two, threes, fours and between all 9 of us. We parted ways with hugs for those whom we don’t expect to see again and all our guests left by 5:30. What a beautiful night this is and even though the clouds moved over the sky, those clouds were going to put on a lovely display after sunset. Bill had picked up a New York steak for his supper one night so I prepared a potato to bake as well. He lit the Weber Q.

My supper was the last of the popcorn shrimp which I did in Rosy, the air fryer, with Caesar salad and we both enjoyed our meals. You could say we had surf and turf but other than Bill cutting me off a small portion of his steak, it never went beyond that. 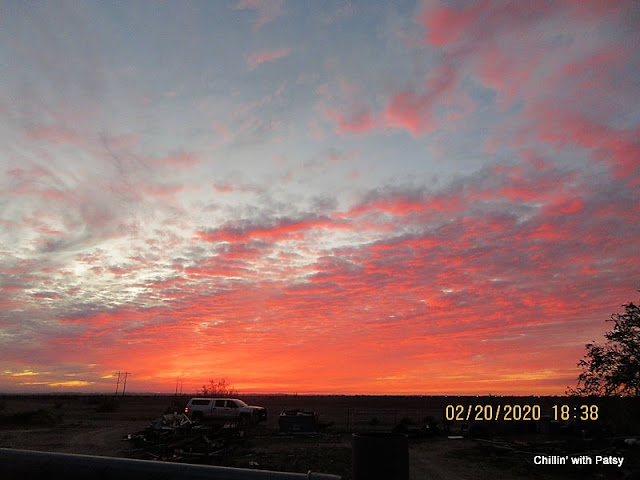 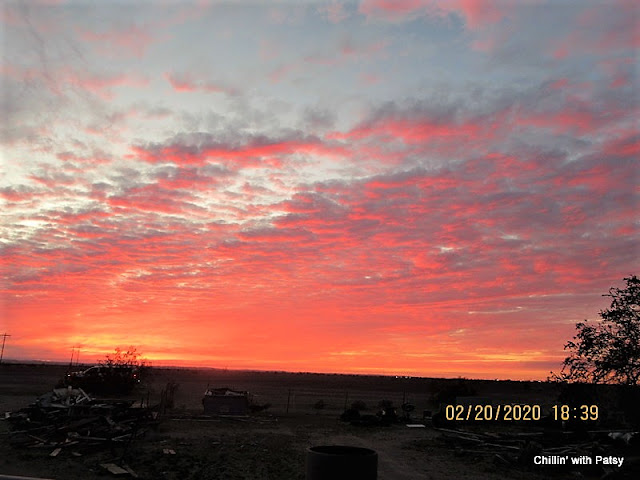 We cleared the dishes and watched more pre-recorded programs during the evening. I worked on my blog at the same time. First, NCIS, The Good Doctor and then FBI. We’ve had a great day, and a full day.

Thank you for stopping by to see what we did.

Posted by Patsy Irene (Chillin' with Patsy) at 9:36 PM