Sightseeing Day, You Gotta See It and We Did (Collage Day)

Pilot Knob RV Resort, Winterhaven CA
On Tuesday, Feb. 18th Bill and I had planned to go to see a few things in California. Slab City, Salvation Mountain and make the trip around the Salton Sea. We informed Keith a few days ago and he thought it would be a good day as we weren't the only ones who said 'you gotta go there'. We were up at 6:30, Bill had a shower and we each had a nibble of Cheerios for breakfast. We left the Suite at 8 to pick Keith and Oreo up. There was no reason that she couldn’t come along.

To make it brief, it didn’t quite turn out as planned. We DID get to see these things but my gps wouldn’t connect and Bill’s couldn’t find either place so we kind of did the ‘wing it’ thing. Poor Keith, I feel bad when someone is with us and things happen. We made a  couple of travel errors and missed a turn here and there. Drat! But we did find Salvation Mountain and I thought that was pretty cool. We couldn’t walk on the Yellow Brick Road as it was due for some repairs, but Bill and I walked around and up the dirt path for pictures. 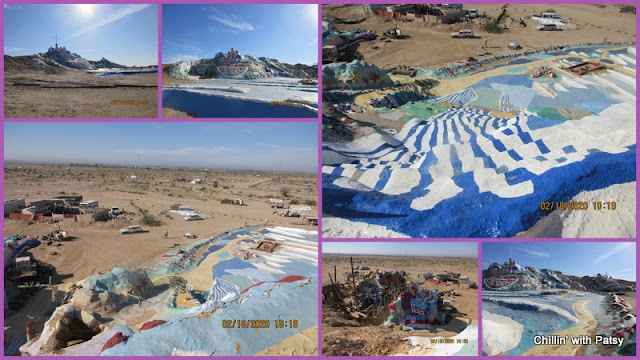 We drove around Slab City, which is what you do, and got a different view of how some people, down and out, are living. It looked different than both Bill and I had expected but it was a ‘must-see’ off our check list and we're glad we went. From there, we drove further on CA111 to Bombay Beach and took a walk down to the Salton Sea. Some smell, yes, but not unbearable. Bob and Ken had mentioned the creative display someone put up on their private property so we drove around town to find that and take a picture.

We mentioned taking Keith to Borrego to see some of the sculptures but he wasn’t overly keen so we just drove to the northern tip of the Sea, connected to #86 and came down the west side. On the way west past the Hot Springs at Holtville, Bill tooted and we waved to our friends, Lori, Roland, Oscar and Judy, but I don’t know if they heard. It was a long day. Oreo was the best puppy! She laid down in the back seat with her Daddy and other than a few soft nuzzles on my neck, she hardly moved.

We’d stopped where #111 and #86 met, in the Denny’s parking lot for our lunch since we’d all taken sandwiches. The day was a hot one, 81F this afternoon. Close to home we texted Ken and Kim to see where they were at and invited them for Happy Hour. I hope Doug wanders and finds us as we don’t have his phone #. Around 3:30, or was it 4?, he did exactly that. He was walking by with Yuma. We chatted for a bit before he moseyed on home, wishing us a good afternoon. He's pretty worn out, still.

Kim, Ken, and Bill sat mostly in the shade although I did enjoy the sunshine during Happy Hour. When Kim had finished her drink, I brought her out a teaspoon with Vanilla Bean ice cream to taste. She liked it! Around 5, we said goodnight and they walked back home. Bill and I sat inside until almost 6 before starting supper. I felt worn out and while he worked on his model for a bit, I know I read a couple of chapters and then dozed in my chair. I had 3 haddock filets out, almost thawed now.

Bill wanted fries with the fish so that was his job. He opened the Fry Daddy box and I added 4 cups of e.v.o.o. The rest was up to him and I heated the oil in a fry pan at the same time. I used Fish Crisp to coat the pieces and everything was done at the same time. Supper was very good and we cleaned up the mess from frying inside. Bill found the movie Notting Hill and while our regular programs were recording, we watched it together.

The rest of the evening went quietly. We had a pretty good day today and saw some things we’ve not seen before.

Thank you for stopping by to see what we’ve done. Your comments are always welcome.

Posted by Patsy Irene (Chillin' with Patsy) at 9:13 PM