Pilot Knob RV Resort, Winterhaven, CA
On Monday, Feb. 24th we were up before 7 and I went for my walk almost right away. It was 50F/10C so similar to the weather our Ontario family and friends experienced yesterday. I didn’t need to bundle up other than my hoody and windbreaker. The winds were almost non-existent. Bill had his shower while I was walking and when I returned, I had my tea and got washed up myself. Bill had a bowl of cereal as we were going out for the morning.

We picked Ken and Kim up for one more adventure into Los Algodones this season. It would be the finale trip and it was all for pleasure today. First thing, Bill got his haircut and a good one for $4 plus a beard trim for $2. Boy, he is looking spiffy now! Some cuts are better than others and she didn’t have much choice but to make it a good one as his wife was watching – closely. She did great and asked my opinion when she was finishing. 😊

Ken and Kim had been shopping, picking up last minute gifts for home and then we trooped around, doing the same thing. We exchanged cards with Andy, our tour guide and greeter, before saying ‘goodbye, see you in December!’. He is a very nice man and always makes us feel welcome.

It was around 11 when we were done gift shopping and headed for the Paraiso open court restaurant for lunch/breakfast and – say it with me – M A R G A R I T A S!! Ola!

Bill, Ken and I ordered breakfast from the menu and Kim opted for a lunch meal instead. They were all good and I was hungry for it. We stopped at the Purple Pharmacy so I could get a couple of bottles of my shingles pills and 4 tubes of cream. The sun was hot and we all agreed that it was a perfect day for our last trip over the border. There wasn’t too much of a line to cross back into the U.S. and it was moving quickly Half hour later we were at the truck. We dropped our friends off and scooted home.

Plans were to meet and drive to the blm behind us to Doug’s for Happy Hour. He hasn’t hosted before so we thought that was a good idea. He was keen for that. While Bill did some online stuff and took a nap, I rode my bike up to work on the puzzle for an hour. Ken offered to drive and picked us up around 3. Doug was ready for us and we settled on his patio with the sun at our backs. He offered for us to move to the north side of the White Lion for shade but we stuck it out in the heat until almost 5.

Back home Bill and I just chilled until 6 when he lit the Weber Q to grill burgers. I got the condiments out inside and we were eating by 6:30. The burger was good and although I reheated the leftover shrimp to share, it wasn’t that great. We each had some ice cream and I added crushed walnuts to mine. We got the dishes out of the way while watching the first episode of The Voice.

This was a fun day. The morning in Mexico finalized things we needed over there and then a new location for Happy Hour. Doug was too shy to invite us so we invited ourselves! 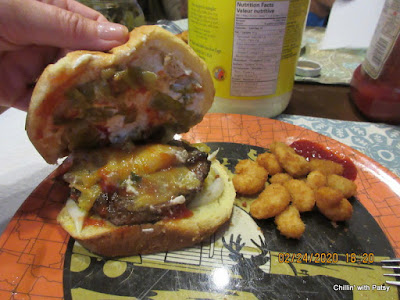 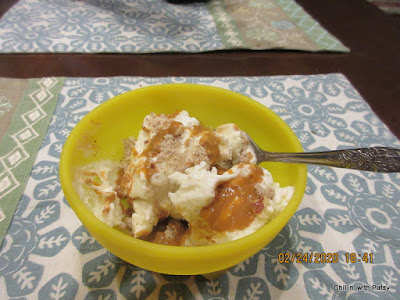 The weather was perfect with just enough wind, occasionally to cool us down when we needed it. The high temperature today was 81F/28C and you can’t beat that.

Posted by Patsy Irene (Chillin' with Patsy) at 8:21 PM