Pilot Knob RV Resort, Winterhaven, CA
On Friday, Feb. 14th I woke up just as Bill was getting dressed. Hmm, I’d slept well. I stretched and joined him downstairs. He beat me to the punch and had placed a Valentine’s card on my place setting. I thought of getting his card out last night before going to bed but I didn’t want him to see me do it. Why so secretive? I don’t know, just because it is nice. It really doesn't matter who asks who to be their Valentine first, as long as we both want the same thing. Each other. And we do. 💓 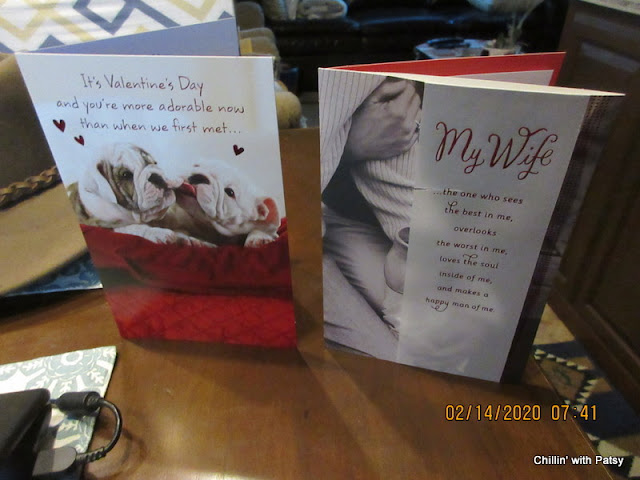 Bill picks the sweetest cards; mine are usually on the light-hearted side expressing the same message but his are deep, loving with all the right words. I’ve gotten more serious at picking cards in the latter years, because our love is indeed not a joke. 😊 So, when Bill finished his coffee we went for a nice walk.

What a gorgeous morning. It was 50F and no wind at all. We saw Oreo and Keith and chatted with Loyal, the park’s hard worker who reminds me so much of Daddy. The small stature, the pleasant personality and those piercing blue eyes.

Back home, I made my tea and sat to read blogs. I suggested Bill have a bowl of cereal if he was hungry, because I wouldn’t be back to make brunch until noon hour, likely. Today was poker pool with the ladies and I needed to go. I remembered that there was exercise with Diane at 9 but hadn’t planned on that. It is good for us, I’m sure, but so low key that I get bored easily with the slow-moving pace. That’s probably why I don’t enjoy yoga, not that I’d be able to sustain a fast class!

When I walked in, Carmen had arrived just before I did and the exercise class was just finishing. We have 2 pool tables in there so when Allie came in, all smiles to see me, we uncovered them and there were 8 players. Both tables were used. I started out playing pretty well, actually the best yet, for 2 games and then it went all to crap. Ha ha, but I was having fun, never-the-less! That is why I go. I’m not a good pool player so it is a bonus when the ball goes in, no matter who’s it is!

The good news is that after 5 games, I tied with 2 players for the loss. That made me feel good so I took a picture. Everyone got a chuckle out of that one!

I walked back and stopped to pass a message on to Ken from Barb and returned home. Bill, my worker bee, was just finishing up with the truck tires. Checking the pressure, topping up where/if necessary and then he moved on to checking batteries etc. I can’t tell you all that he was up to. In one ear and out the other.

We had omelettes for breakfast and then he took the truck out for a short test run after his work. I was planning on going to the real pool for a swim and sun sit but my heart wasn’t in it for some reason. It’s been so long that I just decided to sit on our patio in my chair with my book. It is a gorgeous afternoon, stretching upward towards 72F/23C.


We received a text from Bob and Jo-Anne, who were expected to come back into the park tomorrow. She advised that they decided to stay another 2 weeks in the park in Yuma. The price was right. That indicates that they are enjoying themselves and that is great!
Pilot Knob, here, is thinning out. Many rv’ers are moving along now to different locations. I like it not so crowded so it is more appealing as that happens. With this warmer weather, I’m sure I’ll get a pool visit in soon and not have to fight for a chair up there. While Bill was gone for his run, I used a baggie of frozen Ridge apples to make Apple Crisp in Madame IP. Oh my, was that easy! It isn’t keto but only because I don’t have (and dread paying the price) the almond flour and Splenda brown sugar on hand. It will be delicious! The smell is wonderful!

Around 2, I went to the puzzle room to work on the border of the new puzzle I started yesterday. Someone had added to it and put a few pieces together and I made room on the table by putting our last one away. This was 1000 pcs. and it would need a lot of room for the pieces. I walked back home after some progress to get things together for Happy Hour. Bill and I walked with our chairs and cooler to Kim and Ken’s site. 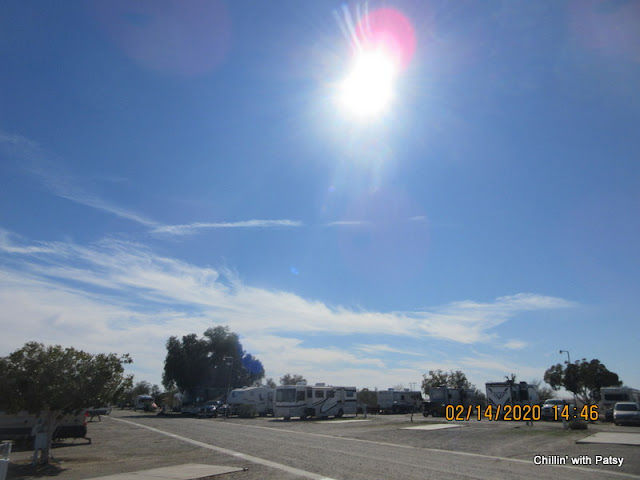 Keith joined us within the hour and we enjoyed each other’s company until close to 5:30 when we said goodbye and goodnight. Bill and I sat back home for about half hour before I started supper. It was another simple meal of mac and cheese and big beef weiners. I only had to reheat them up on the stove while the noodles cooked. It has been a long time since we’ve had this meal so actually enjoyed it. We each had some of the apple crisp for dessert and it was scrumptious.

During and after dishes, we watched a cute movie called Must Love Dogs. We’ve seen parts of it before so thought we would watch it from the beginning. The rest of the evening was quiet as I tried not to think about tomorrow morning. It would be an early one as we were due to be at Dr. Eva’s in Mexico for 8 am. It was my choice to take the early appointment so we could be out of there and back home by 10. That’s my hope anyway.

I hope you’ve had a good day. Thank you for popping in!