The Ridge
Friday, June 19th Bill and I were up and out the door by 7:15. He has a short day of work today which is good with the oppressive heat expected. I cleaned the Mat and was back home just after 8:30, having my tea out on the patio. In the shade. There was no breeze at all this morning so I didn’t plan to work in the gardens or outside at all for that matter.

Instead, I decided to clean the Bunky/Roost/She Shed. I want to make it look more like ‘my’ little haven. I put all the paints away, straightened things up and then moved some of my little collectibles out there. The few pottery items I made last summer with the girls went out there to hold rocks or candles and my little decorative shoes that I kept (Bridgette got two as well) now sit in the window sill.

It didn’t feel too bad out there as far as temperature but I had the windows open and soon it warmed up with the outside air. I like the fresh air but I kind of euchred myself by letting in the heat. Once it was cleaned and swept, I took my sewing machine from our hall closet out. It can stay out there for the summer, I think, and will be handy for small sewing projects. Speaking of which……….

A pair of Bill’s work jeans had a hole in the knee. As much as that seems to be the going rage of young and not so young these days, they needed to be discarded or patched. Miss Smarty Pants here (moi) thought, “I can do that!”

Well, I should’ve just let sleeping dogs lie as patching a hole halfway up a pantleg is not easy to do on a sewing machine like mine. I didn’t give up and persevered until the patch was at least in place. I will need to finish it by hand.

Our Kokopelli blanket (from Los Algodones) has black edging that has been coming unstitched and I thought (once again, duh!) that I could stitch it to save it. It is a king size blanket with a lot of edging. Stitching it wasn’t going to work as it would just continue to unravel.

Underneath the edge, the seams were nicely stitched so I tore all of the edging off. It looks fine, not unfinished at all. Yay! Two projects out of the way, almost.

Bill made it home at 1:30 just after I’d finished my lunch plate. He had his sandwich so I knew I didn’t have to make him anything. We sat at the patio table under the awning shade together and fed Casanova and Romeo a few peanuts. 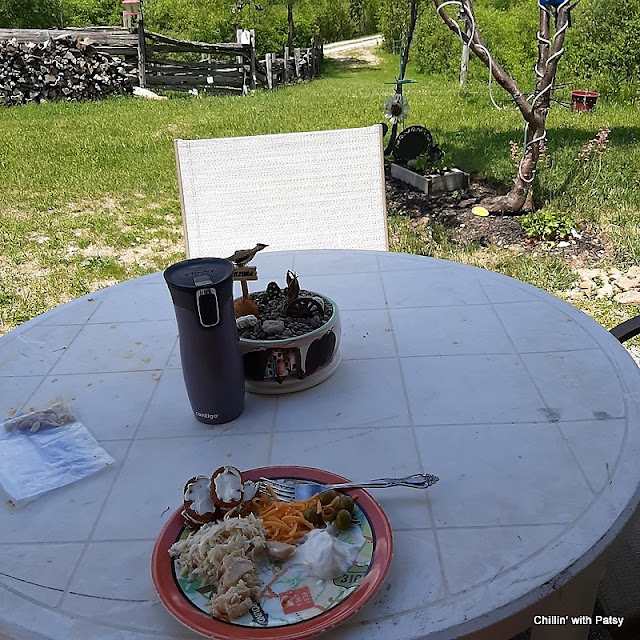 They aren’t used to Bill yet so were very timid today. They’ll come around; he really isn’t so scary. 😊 The clouds started rolling in, the gray ones and the winds picked up a bit so we went inside to the cool air for a snooze. I brought the awnings in half way and joined Bill upstairs. I doubted I’d sleep but a lay down felt welcoming.

Bill dropped off and as I was drifting off too, his phone made the silly marching noise of a notification. That did it for me but we still managed to rest for an hour before getting up. We wanted to get a bladder of water so Bill asked if I wanted to go along. Donna and Gerry would be out later but they weren’t at the Acreage yet. As we turned a corner nearing their place, it started to rain, lightly.

I stood under their shelter while Bill braved the drops and hooked up the water hose to the bladder and the pump.  Funny weather because as it was gently raining, the sun was out in full force. No rainbow though that I could see. Donna and Gerry arrived soon after we were finished. We stuck around and Bill and Gerry had a beer while we enjoyed a short visit before we left for home. It was 5:30 and time to think about supper.

Bill transferred the water and I sat inside. I was feeling just a bit off and not hungry for a hamburger meal after all. The thawed ground beef could wait for another night. We agreed on wieners and brown beans and finished off the last of the ‘watery’ Jell-o. Maybe I was actually just hungry but still felt sluggish after dishes. The temperature was starting to drop off nicely so we could open windows tonight if it doesn’t storm.

The evening was quiet and all Bill had to do was set up the plug for our cooler in the truck. We are going visiting and shopping tomorrow! This was a pretty good day and my She-shed is looking a little more like a place to spend some crafting hours. I love it! I hope you had a good day too.

Posted by Patsy Irene (Chillin' with Patsy) at 7:17 PM