The Ridge
On Saturday, June 27th we were up with the birds. It was a late night for me last night, watching Animal Planet. There are some interesting dog rescue and bear rescue shows that we've started watching so it was 11 when we crawled into bed. Crawled being the operative word. After weed trimming for 3+ hours, I know I was feeling it. But all for a good cause as the place looks great!

Every so often, up here on the Ridge, I think of Mom. I miss going in to see her for my weekly visit. She wouldn’t understand and could actually get quite upset if any of us did the outside visits and didn’t allow her to hug us. That would break her heart and ours. I pray for the day when I can get that smile and that long awaited hug. I don’t know why she pops into my head when she does but I’m glad for those moments. This morning was one of those times.

It was an overcast sky when we did get up before 7 and Bill sorted the clothes for me as I got ready for work. There was no one in the Mat when I arrived but one young couple arrived while I was there. I had my pick of washers and I’d gone prepared with my dryer towels for the dryers. Good thing as I could be bringing things in off the line a few times due to the impending showers. Everything was done and I was home by 9.

Bill had started the grass cutting, although it wasn’t too bad yet. Now that he only has weekends or evenings, he is keeping a closer eye on it. The corral cut got missed when he cut last week so made sure to take care of that now that the trimming in there is all caught up. Inside, I put my clothes away and then made my tea to take outside.

There was about a 14” hole up on the berm from where the clothesline was before. I lugged the ridiculously heavy pail of dirt and stones, that I’d gathered during the week, across the lot so I could take shovels of it up to fill the hole. Didn’t take long but I’m glad now that I didn’t throw that dirt into the brush pile. It came in handy. I’m hoping after it is cut, that will be a good spot for Bocce Ball. Maybe.

I watched Bill finish up cutting and we sat together at the orange table with my tea and his second coffee. Romeo was flitting around, feasting on the fallen bird seed and avoided our offerings of peanuts today. Hmm, something has spooked him perhaps? Bill wasn’t done. He hooked up the macerator to our black tank of the Suite and the blue boy (which is gray) which was in the back of the truck. I think it took 3 loads to empty the tank and there was a never-pleasant job done.

We were curious to test our propane fire pit that we purchased from Suzie so Bill hooked it up to the small bbq tank. Looks like it will be a nice addition to some cool evenings if not here, down in the southwest. After I had a coffee, we both went into town to fill Black Beauty and the gas can for the mower and trimmers. Tomorrow will be Ptooties turn.

We fueled up and then stopped at Home Hardware where we were allowed to walk right in, finally. They were all so friendly but seemed to be a lot of young staffers on hand. Just trying to be helpful and get people in and out as quickly and safely as possible. No masks were to be seen but there was plexiglass set up at the register. I wanted finch/niger seed and we wanted a Canada flag. They were on sale this week.

It was noon hour and right on time I fried up scrambled eggs and mini sausages. Filling, I couldn’t eat the 4 I’d put on my plate but Bill was happy to have the extra  one. My appetite seems to be there but it doesn’t take much to fill me after a creamed tea and coffee. I’m certainly not starving! We cleaned up dishes and Bill had a little lay down before going down to his cargo trailer. Fun stuff for the rest of the day.

I relaxed in my recliner and delved into my story again. The air was nice outside at 20C/69F but it has dropped some spatters now and then since we’ve been home so I’m staying indoors where I don’t have to move. Supper is planned, in my head, so unless I decide to plug us in and bake something, we’re good for a quiet afternoon. We were supposed to see clearing around 2 this afternoon, not wholly and completely, just ‘some sun’. It is 3 o’clock and no sign of it.

The batteries are charging though from the sky’s brightness as we’d unplugged yesterday for a few days of solar benefits. Hmm. My half clementine’s were completely void of any fruit so I cut two more and placed them around the area. I also filled the hummer feeder, it sure empties fast and I know it isn’t all from the hummingbirds. The orioles enjoy the sweet liquid too.

No sooner did I type that when around 3:30 the sky started to exhibit signs of clearing. That would be nice since we’d hoped to have a fire here tonight. I got a lot of reading done moving inside and then out again. Bill came up after I took a walk down the lane around 4:00. There were a lot of tall wildflowers so I gathered some for my watering can. I only have one tall vase inside the Suite and it is being used. The can works great for outside. 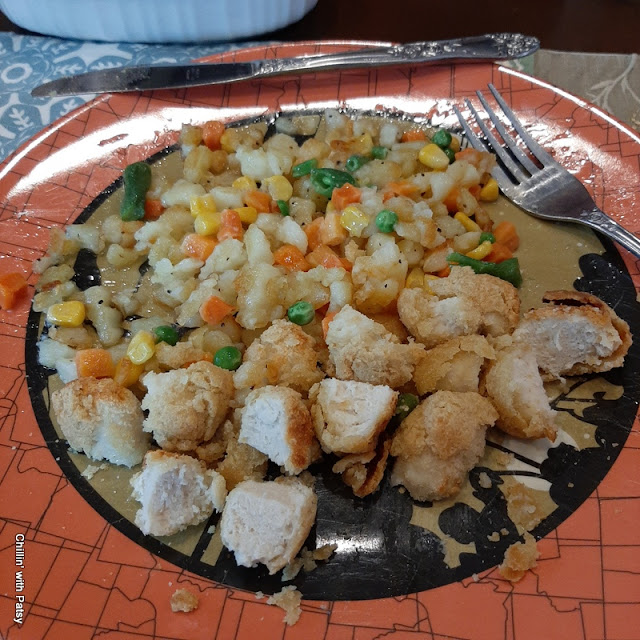 I came in and joined Bill around 5 and then started supper at 5:30. Tonight, Rosy (air fryer) cooked chicken balls, I fried some hash browns from the freezer on the stove and the vegetables were done in the microwave. It was good and we got our fill. There are clouds, then blue sky, then clouds but we think it should be a nice enough night to invite Donna and Gerry over. It isn’t supposed to rain tonight unless overnight.

After dishes, I finished my post and then back at the book until Bill started the fire. It has been a while so I was looking forward to it. This has been a great day so far and an evening with family and a friend, if Mike wants to come, will be nice too.

Thank you for popping by! Your comments are always welcome.

Posted by Patsy Irene (Chillin' with Patsy) at 5:14 PM