The Ridge
So, it was Tuesday, June 30th, last day of this month and I knew what I had to do. Bill and I were up together around 6:30. I’d had a dream-filled sleep at one point and seemed restless a lot too. Bill said the same thing. He had to actually wake me from a dream where I yelled. I thanked him, apologized for waking him and as I curled back into the pillow, I almost giggled. It was clear as a bell, the dream and how I debated in it whether I could scream.

Back to this morning. Bill went in for his shower and since it was so early, I slipped out for my walk. I’m glad I went early as it was already in the mid to high teens. Celsius.

When I returned, I made my tea in a to-go coffee mug and soon after Bill left for work at 7:30, I drove to Hanover. I had quite a list, with 4 stops planned. I went in order of their location along the north side of highway 4. North? I don’t know, my right-hand side. 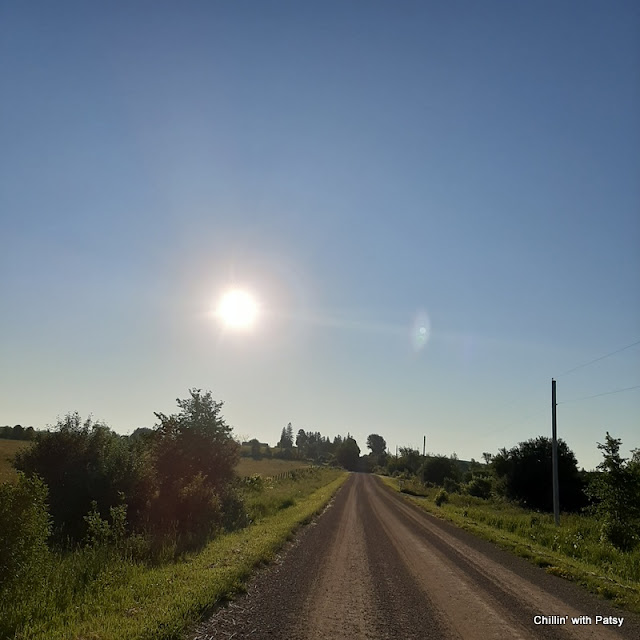 There were a couple of ‘should’a’ moments as far as picking something up at one store when I discovered the next store didn’t have what they’d advertised, but other than that, I didn’t do too badly. So, Walmart, Dollarama, Giant Tiger and Independent (which wasn’t in the plans but turned to be a necessity without backtracking). Lastly, in Hanover, was M & M’s for our meat. We’re going to try their Bacon-wrapped Filet Mignons for our guests.

It was after 11 when I left the city and drove to Durham’s Liquor Store with the next list. Bill needed his rum and we wanted to top up on wine. I’m finding staff at all of the stores I visited are very friendly and accommodating. No masks, at this point, are required, still optional, so I didn’t wear the one I carry with me.

I took a peek in the second hand store, Going Once, Going Twice, on Main Street, Durham. I hadn’t been in there since they re-opened. I like the owner, a very nice lady. I’m glad I stopped because there on the dvd shelf was the movie I have been looking for! What a deal!

One more stop at the Crazy Dollar to get a small Canada flag for our mailbox. Bingo! No one else had them but I knew he did. He didn’t recognize me from the Laundromat until I told him as I was leaving. He is quite the chatterer and I remembered that from my days in there cleaning.

Finally, back home. There is only one thing I had NO/ZERO/NADA success with and that was Caesar salad mix. I’m not going to make it up from scratch so might have to pop in to Foodland later when the parking lot isn’t so full. Either that, or just potato salad will have to suffice.

I unloaded everything and gathered the receipts together. That was a costly adventure but all worth it and planned for. I put everything away and then at 1, made a coffee and a wrap for my lunch. That was a nice change. I’m keeping the blinds drawn today, Bill suggested that with windows open, it made more sense when there is a breeze. Hopefully, it doesn’t backfire. We know we have the a/c for sleeping if necessary.

Tomorrow will be a different story. Company coming so we’ll keep the Suite closed up and let the a/c flow down from the bedroom. It needs to be comfortable in here just in case this is where we have to eat for one reason or another.

The afternoon was a busy one too. I watered the hanging flowers and the vegetable garden. I trimmed the lower branches off Goose the Spruce and 3 other little pines on the east hill seen out our back window. It will be easier for Bill to trim and looks better.

Next, I sanded the metal of the bench that I saved from the B of E years ago. It was destined for the dump and I asked my supervisor if I could have it. It wasn’t really black to begin with, more of a bronze rustic look but it needed some paint. We have a few cans of rust proof black spray paint so that is what I used to spruce it up. It looks better but I only did the rusty parts right now and will do the rest on another day.

We have had a couple of those long body pillows from back in the day when they were popular. Last summer, I split one in two for some outdoor chairs but I couldn’t locate the other one. After searching in the rafters of the Bunky, I came to the conclusion that it must be in our couch bed. That is the one that belongs on this bench. When I finished, I was hot and sweaty as I sat in the shaded King chairs. Bill came up the drive within 10 minutes just after 3.

They finished their job and he was done for the day and for tomorrow as well. Beyond that, we’ll see when Mike needs him. Bill sat with me for a while, enjoying the breeze over in that corner of our lawn and then we got out the dining tent that I’d bought from Mitch’s garage sale last summer. It hasn’t been up yet! When we opened it, we realized that it had never been opened. It was the easiest tent we’ve ever put up and it’s huge! It will be great tomorrow for some shade and bug free for eating. Yay!

We came inside, both feeling tired from the work and the heat of the day. Bill dozed and I watched NCIS. For supper, I reheated the hamburger ‘goulash’ in Madame IP while cooking carrots and mixed veggies on top in tin foil. Within 15 minutes, we were eating. I felt hungry so I’d started at 5:30 for a change. During the cooking, I peeled potatoes to cook for tomorrow’s salad and started them in the instant pot right away.

After supper, I brought the dish with the leftover ice cream cake (Father’s Day) in from the bunky freezer. It was pretty frosty but when we tasted it, it was still yummy. There is still a fair bit left so I cut it and transferred it into our Chapman’s container in our freezer. There was just a bit of Black Cherry in the bottom so this would keep it frozen perfectly! I’m not just a pretty face! There were a lot of dishes as I didn’t get them done today.

When they were cleaned up, Bill drove over to the Acreage to get water. We were pretty low again. My potatoes were done so I moved them into the fridge to cool off. I’ll cut them up in the morning.

There was, by this time, a lovely breeze outside and it slipped in through the open windows throughout the evening. Should be good for sleeping tonight too. A wonderful day!

Email ThisBlogThis!Share to TwitterShare to FacebookShare to Pinterest
Labels: running around at a nice pace
Location: Priceville, ON N0C 1K0, Canada