The Ridge
So, when we woke up on Friday, June 12th it wasn’t exactly the day I thought it would be. It was chilly inside the Suite and we didn’t have any heavy blankets on our bed anymore. Just a sheet and a light chenille bedspread. Brrr. It was 13C/57F. Saying it (or typing it) doesn’t make it sound too bad but with 7C/44F outside, I was cold. Bill came to my rescue and turned the furnace on for a cycle, setting it at 16C/61F. That did the trick. It was nice to sleep in a bit with no rush to get up. 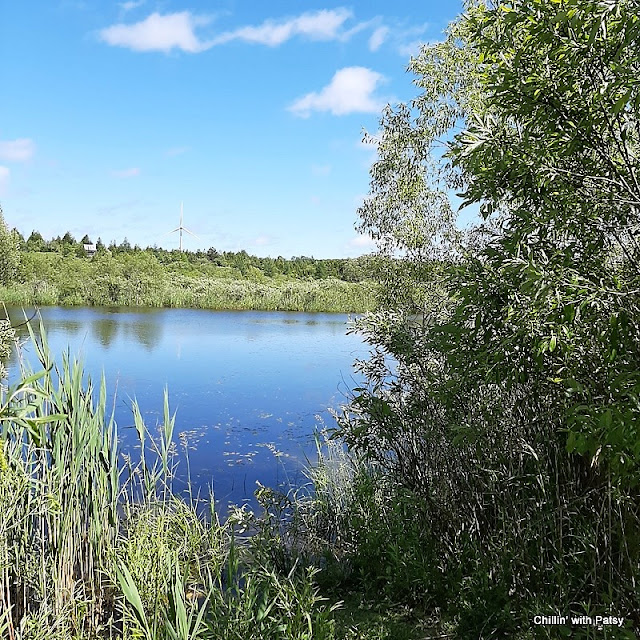 We had our coffee and tea discussing how ridiculous it is that we are changing from warm clothes to cool clothes depending on the day. Ever-changeable. Bill had a cinnamon bun warmed up a bit and we hopped in Ptooties for a drive to Mount Forest. Bill had ordered a wheel for his riding mower and once I heard that there was a fair-sized grocery store there, decided to tag along.

We also wanted to look at some car seat covers. Our seats are light coloured and won’t be clean for long unless we cover them. We made a couple of stops, Robert’s Farm Equipment, Home Hardware, No Frills and then Canadian Tire. The first thing Bill experienced is that in Robert’s he needed a mask to enter. That is a change since he was there on Monday.

All businesses in Wellington County are making it mandatory. Seems like we’re going backward here but they must be protecting against the out-of-towners who are ‘breaking free’. He was handed a mask so he wore it as well as in each of the other stores we entered. I had mine that Pat made me (as well as a couple of neck scarves) so slipped it on. I dislike them because my glasses fog up (oh, for contact lenses!). We found what we needed, mostly, but most importantly for me, seat covers at a great price. A 3-pc. set.
Back home, I made us another coffee and we caught up on a few blogs, receipt recording and I was able to finish my Thursday blog posting. Bill was outside putting a few things back in place now that the Suite is home. The generator, his tool boxes etc. Things that he wanted to leave behind when it went in the shop. Then I made breakfast. I want to get back outside to plant my flowers I dug up yesterday but the wind is cold and very gusty again. Not much sun, yet.

For some reason, we were both feeling tired out so settled back for a quick siesta. Bill drops off easily, every time, and I do more restingwhen I stretch back than actual sleeping but that’s okay. Bill went out to work on a few more small things that he has wanted to do and when the sun began to show more of itself, I bundled against the chilly day and went out to plant. After finding spots on the hill for the 4 new columbines I watered them well and then went for a laneway walk to check the mail.

The sun was quite nice by then and after Bill finished working and went inside, I sat for a while in its warmth. Reflecting. Isn’t that what you were doing, Shirley in your last post? 😊 Sometimes there are so many things going on in our head that either a walk or a quiet sit is just what we need to sort things out, put things in perspective.

The sun was warm on my face but after 15 minutes or so, I changed from my gardening shoes, closed up the Bunky and moved inside too. 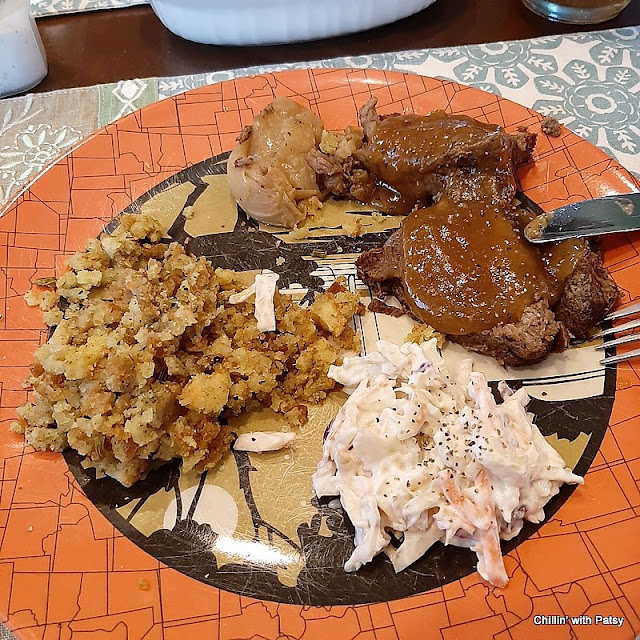 Bill was watching NCIS so I joined him. At 6, Madame IP warmed up supper and, in the microwave, I made up some stove top dressing. There was only half a potato from last night’s meal. Supper was delicious, second time around and Bill had a cinnamon bun for dessert. My Jell-o didn’t turn out very well this time but I had earlier blended it with the cream and cream cheese regardless. I got distracted, obviously and added too much water perhaps? Anyway, it is more liquid than solid so I may be drinking it like a smoothie. Woops!

After dishes, Bill went up to watch a Hallmark movie and I worked on my blog for today and watched Wheel of Fortune and Jeopardy. They are the game shows I enjoy between 7 and 8 pm. I’m not good at Jeopardy but I enjoy watching those who are. I took a walk down the lane once more before calling it a night and settling indoors. This was a nice day but I still haven’t gotten over to sweep the Cedar Creek. Tomorrow.

The evening was another quiet one watching some tv and maybe I’ll get into that book. Thank you for stopping by!

Posted by Patsy Irene (Chillin' with Patsy) at 7:09 PM