The Ridge
I felt quite good when I woke on Sunday, June 14th. Even though I’d just woke from a dream, I felt that I’d slept well. Seems like I’m laying on my right arm more now and wonder subconsciously because my left one aches? Strange how we change habits. Just goes to show that we are not as rigid in our living as we think. 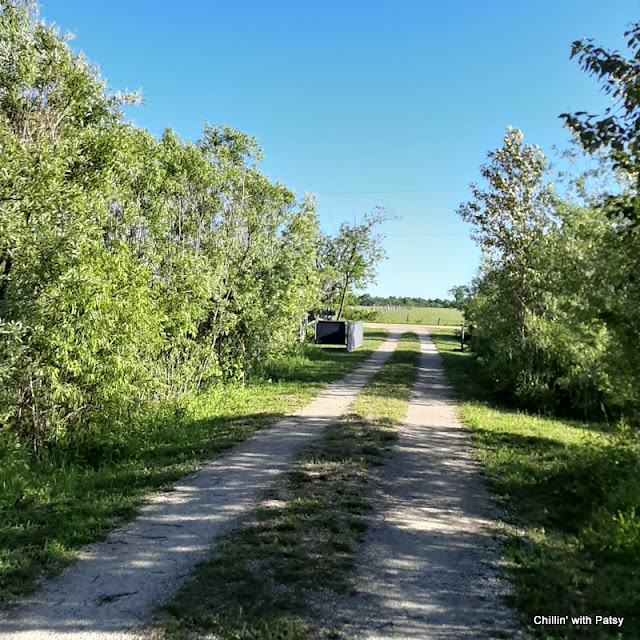 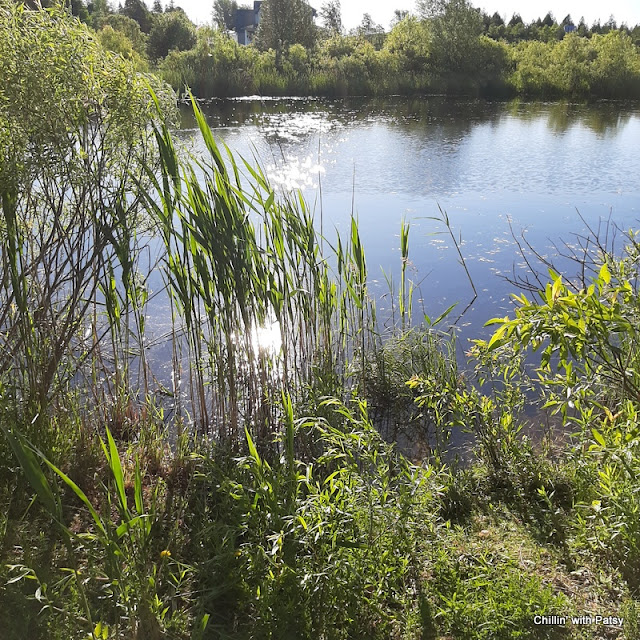 We’d left the Blue Flame heater on the lowest setting, yes Bill got it out yesterday, and it was a perfect temperature to wake up to. We slept in until 7:30 this morning so the 11 pm bedtime governed my sleep time. It was nice as we had no reason to ‘get moving’. I did dress for my walk though and headed out the door just before 8 while Bill sat and had his coffee.

It was pretty nice out, 10C/50F and the sun was shining with low breezes. Perfect! I walked 1 ½ miles down Baptist Church Road and of course saw the deer out in the field. No zoom camera, again. It was nice to see her/him eating even if it was the newly planted crops. Approaching Mitch’s house, he pulled out of the lane and rolled his window down for a chat. Funny, he didn’t recognize me in brown hair. 😊

I had my tea when I returned home and Bill headed over for a bladder of water. We weren’t low, 40 gallons, but it will save him going at the end of a busy work day if we top up now. While he was gone, I had a nice long shower and read a couple or three blogs. Bill went up the berm to my clothesline and dug a new hole to re-situate its location. He wasn’t trusting that the stake when pounded in wouldn’t hit a rock. Our ground everywhere is the rockiest. 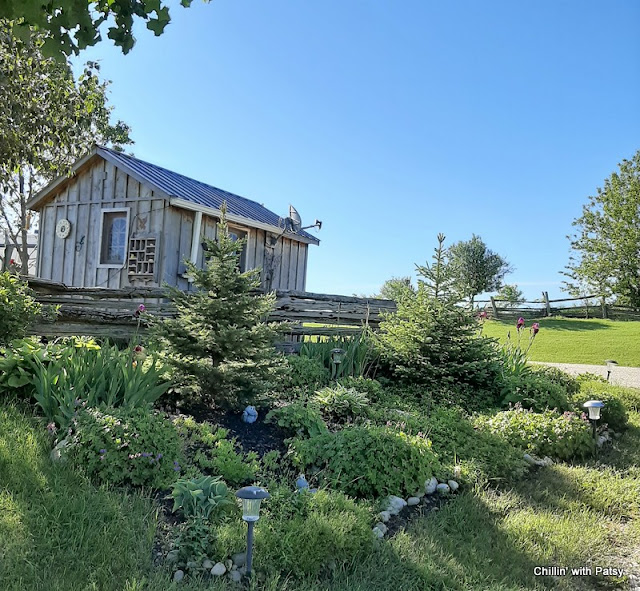 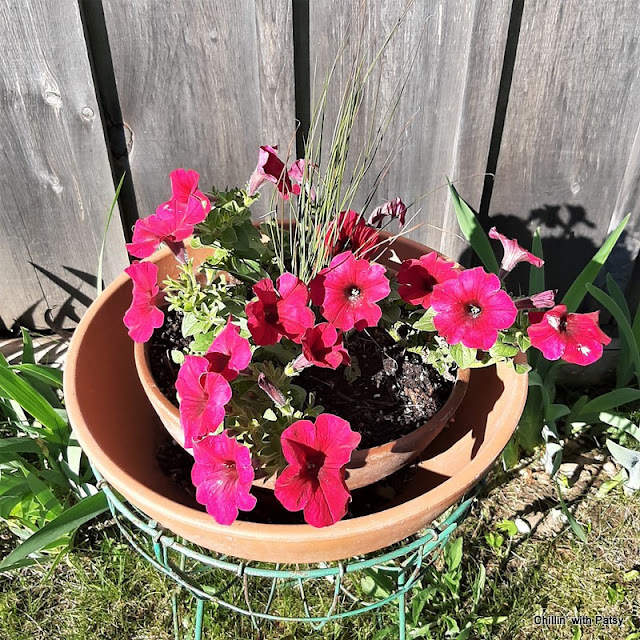 We walked over to our neighbour’s to the east. They have SOLD their house and have been packing up for a couple of weeks. We wanted to thank them for their help and support with food and water when we returned from the southwest. Tammy was the only one home but we had a lovely chat, making us realize that we will be missing out on a nice friendship.

Bill played frisbee with Cooper, their 5-year-old dog. What a smart cookie he is! All I had to do was say the word Frisbee and he went and got it for a game. We wished them luck and she did the same for our future travels and we left with a homemade gift from Tammy. More about that in another post.

I was in my garden clothes so went out to start work. Bill was rigging up a way for me to water ‘the hill’. I had expressed how I was afraid of losing the Columbine especially. Everything else seems to have taken root. It was very sweet of him to set up the truck, a 12v pump, hoses and Donna’s sprinkler. We (he) connected the hose to the rain barrel, which was close to full, and manipulated the sprinkler until they were all watered satisfactorily. Good job! The rain barrel is now only half full.

Speaking with Donna later, she told me to keep the sprinkler, she doesn’t use it now that she doesn’t plant vegetables at the Acreage. Cool! It seemed to help water soak into the ground better than me standing pouring from a watering can. One day, we’ll figure out how to get water from the pond, up the hill to water the gardens and wash vehicles. It takes $$ that we don’t have right now. 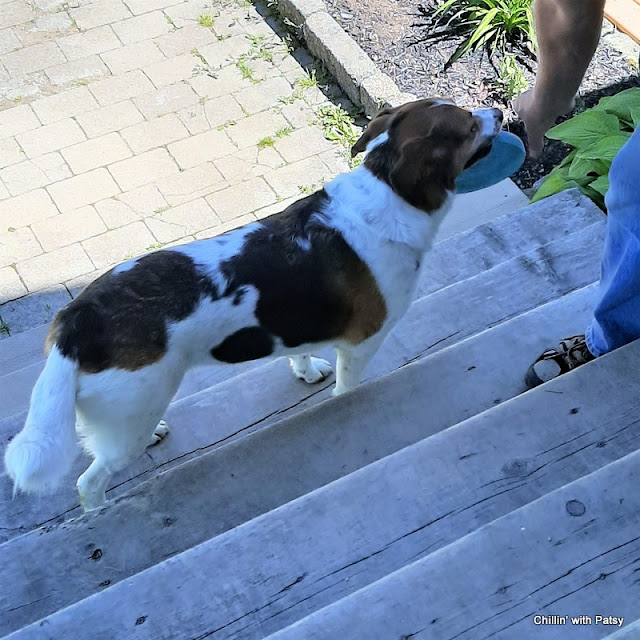 Look at the beautiful colours in his soft coat

It was time to do some more edging so the area up near the patio between our two little cherry trees was next. I thought it would be easier but the edger wouldn’t work because of all the various sized rocks up there. Good grief! So, it was on my hands, knees and butt digging with my trowel that I made a suitable trench all the way around. It doesn’t look like much, but it took me about 2 hours from beginning to cleanup. There are still rocks to carry down to the Hangar area.

I could feel it in my body that it was time to quit so sat for a bit outside. It was a good time to call my son. Patrick was busy digging too and explained about his chore and their plans for making their property around the pool look nicer. He is a worker. Runs in the family. Then I went for a walk down to see Bill, my worker. He was busy in his cargo trailer with a bit more painting. Keeping himself busy too.

I walked down the laneway and back with very few critter sightings today. Everyone is enjoying their Sunday. Well, I always see Chippy at least once each day and that is worth a smile or two. I was also surprised to see Carmelita (why not?) sitting on her picture frame by the pump again. She had disappeared for a couple of days so this was a treat! Hola, como estas? She must be Mexican with her bright colour.

It was time to come inside and start my post, which I did. I wanted to mix up some whipped topping so blended vanilla, whipping cream and Splenda and put it in the fridge. Bill came in a bit later, finished for the day, and went upstairs for a snooze. I sat in my chair and tried to read. I didn’t get very far and my own eyes were getting droopy. I’m sure I dozed as well. At 6, we both got up, meeting in the kitchen at the same time. 😊

We are just having bacon cheeseburgers tonight and corn on the cob. I decided to have mine sans bun. It isn’t the same but I feel I’m eating too many carbs right now. For dessert, Bill had some Chapman’s Black Cherry ice cream and I had the Jell-o with some added whipped topping. That made a difference but I think I’ll keep them separate until serving them up until it is gone. I’ll certainly pay more attention next time!


This was a great day! Donna and Gerry spent the day at the Acreage as well so I’m hoping they enjoyed it as well. The temperature reached 18C/65F here and the sun is still beaming down from a cloudless sky at 8 pm.