The Ridge
On Wednesday, June 10th I have no birthdays to report, none in our family at least. Bill was up and in the shower at 6:30. I got up and joined him downstairs. The sky was a real mix up there and I was undecided what it was going to produce. It was 20C/68F outside so already a warm morning but there was a very significant wind. It would be a lovely walk but instead, I sat in the rocker chair and opened my book.

There was just a small section left to read so I sat and finished it. Such a good story. No spoilers though in case you have the urge to read it. Look it up: Small Great Things by Jodi Picoult. I recommend it for her take on Racism and White Supremacy, handled courageously. I looked out the window and the sky to the west was getting darker by the minute so it's a good thing that I decided to wait to walk.


Bill was ready to leave just after 7:30 and I went out with him to say goodbye. We saw Mrs. Yertle digging another nest so made sure not to disturb her. She was right on the edge of where grass meets gravel near our Weber and table.


Bill asked if I would pull some of the weeds growing up through the gravel around the area where the 5th wheel sits before she comes home. I’ve noticed them but always seem to have other things on my mind. They usually pull up easily.

Before coming in for a tea, I started right away. After half an hour, I’d made good progress, making piles here and there but I could feel it in my back so stopped. Then I had my ‘cuppa’. I looked out the window and noticed that the ‘missus’ was still hard at it so I assumed she liked the spot and was laying eggs. There is no way to know how many she drops in the hole, but us Moms know what labour that is!

I went for my walk and managed to cover 2 ½ miles by the time I’d returned home. The wind was certainly a blessing this morning! The turtle was gone and her eggs covered up. See how hard it is to find? I’ve marked it with a large rock so we know where to keep an eye in 90 days. Fingers crossed we’ll see some babies. I was free then to pull more weeds over in that area although the heat was a bit much already so I wasn't long out there.

I messaged back and forth with my son and my sister-in-law for a bit and then hopped in the shower. Bill was right. We need a new shower head. Using someone else’s trailer gives you some insight. Some things are different than ours. Some are better, some not as nice or convenient but their shower head is AWESOME! It is similar to ours but even though Bill has tried fruitlessly to clean it, we don’t get the pressure that they do. Add that to the list of things to look for. It was a great shower.

It was 12 noon so I made a coffee and made up 6 devilled eggs from those hard-boiled earlier. I had one with lunch, with some tuna, cheese and celery with cream cheese. Filling, just the right amount. I’m trying hard to eat right at noon as our supper meals are all over the board. Not low carb at all and for dessert, forget it. I need to make some more Jell-o soon. I also need to boil up some food for the hummers, they were looking yesterday.

I’m certainly grateful for the rain, as any of you are if you have gardens to water. For me, it has saved me a few watering can fills and a few hill climbs to satisfy my vegetables. I walked up and they look okay but the lettuce is pretty pathetic looking. I’ve never planted leaf lettuce before so don’t know what to expect. Oh well, it is worth a shot and I’m not giving up, yet. It was time to get out and pick up the weed piles I created but I won’t be edging today. Cooler weather is on the way.

By mid-afternoon, the sun was out in full force even though the sky didn’t appear blue. Needless to say, that made it even worse outside, the humidity a looming 84%.  The winds are still gusting between 15 and 24 mph‘thank goodness’, as it brings some relief. I drove to Priceville's post office, 7 minutes, 8.3 km/5 mi. So, definitely not a big deal but that was after an earlier phone call to see if she would deliver the parcel today, since I’m giving permission. Nope. 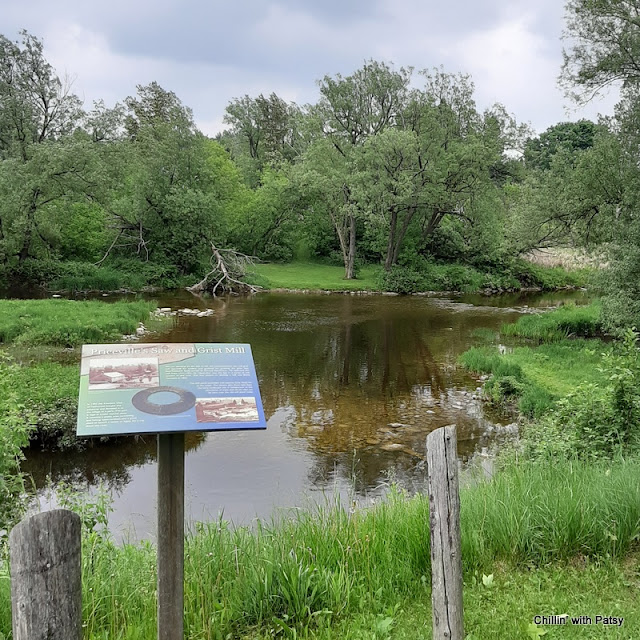 On the phone, I wasn’t rude, persay, but I wasn’t bubbly either so felt I maybe owed her an apology. After all, if it is the Ontario Postal delivery protocol to not pass No Trespassing signs, I shouldn't be upset about it. When I arrived at the quaint village, the office was closed for lunch. LOL It’s okay. New, this year, around the east side of the building is a Mennonite-run bakery/coffee area. Cute! So, I went in there and interrupted them being interviewed for the local paper, I assume.


I needed to kill 25 minutes so looked around at the few baked goods, Chapman’s ice cream choices and listened to some of the history that brought this middle-aged couple to Priceville with their wares. Cool! Of course, while standing there, surrounded (exaggeration) by goodies, I had to buy something! Again, not in my diet’s wheelhouse but a treat, especially for my working sweetie-pie. He will love the home-baked cinnamon rolls/loaf 😊 and I like the brownie points I'll get!

After a nice chat with the owners, I walked next door and retrieved my Amazon parcel. I did apologize for any gruffness she detected but she was sweet and said “No problem, I understand”. I explained that it had not deterred a delivery last summer so was basing things on that. I win! She handed me a piece of paper that allowed me to write a note regarding ‘ignoring’ the sign and please deliver future packages up the lane. 😊 😊
I didn’t want to just drive home so stopped at their tiny natural Kiwanis Park and took some pictures of the river at their historic Saw and Grist Mill site. That was something, at least, and then I drove home. I forgot my trowel as I’d found 3 more columbine that I’d like. I’ll be back! Bill left work at 3:30 and drove to Mount Forest to pick up the Suite so I was keeping an eye on the time. He called at 4:30, with the Suite in tow and was about 20 minutes away.

I had stripped our sheets from the bed, cleaned the shower and removed and stacked my clothes from the bedroom. What was I thinking? A few more days and I still wouldn’t have needed all those! Ha ha! I watched at the window for Bill, there was no shade outsideto sit in for waiting. There would be some extra jiggying to get the Suite in around Rob’s trailer but it will work out. Bill drove in around 4:50 and by 5:20 we were all set, jacks down and slides open.

We’d decided to eat supper in the Cedar Creek (it’s actually a Silverback) and then move only the stuff over that we will need in the morning and to make Bill’s lunch tonight. We’ll be sleeping in our own bed tonight. We agreed once more – no roast of beef tonight, and ‘poor-manned’ it with Kraft dinner and mini sausages. Of course, we had to taste the freshly made cinnamon rolls that I got from the bakery. Oh my!

At 6 or shortly after, the dark blue skies turned BLACK and moved our way from Hanover. Donna gave us a heads up but we still saw a chair, our portable solar panel blow over and a bag of collected beer cans blow across the back lawn. The winds reached 29 mph and the rains heavy. No hail with that round but the night isn’t over yet. We hunkered down while it passed through and then the winds died right down while we ate supper.


The temperature dropped 15 degrees in a matter of minutes but oh, that felt great! When the wind died, we turned their a/c off and opened windows that weren’t affected and cooled off considerably. I think that is the worst part of hot, heavily humid days. The storms that traditionally follow. The winds are my nemesis during a storm.


After dishes, I had to sit for a bit and then we moved the stuff I mentioned above. At 8:30 we were back in our own home ready to settle for the night listening to the 2nd and 3rd round of stormy weather.

This was a good day, although for the most part of it not too much got done here at home. It seemed any job I’d think of to do would be best left until ‘it cools down tomorrow’. Even making hummer food and filling the bird feeders could wait. No point in the storm rocking all the seed out and risking losing the feeders.


We've sure appreciated having the use of our buddys’ trailer but like anyone would be, we are happy to be back in our own. Oh! The Suite looks amazing again! CarStar will get a high recommendation from us.

Thank you for popping in to see how our day went. Comments are always welcome!

Posted by Patsy Irene (Chillin' with Patsy) at 7:04 PM