The Ridge
We woke up on Friday, June 5th around the same time. It was 6 ish. Once I took my ear plugs out, we both laid there and listened to the pitter patter on the roof again. LOL Those birds sound like they’re nest building again. When we came downstairs, after a hand wash, we both skipped the coffee and tea. Bill likes to take a full thermos of coffee with him to work and they always have some at the site for everyone.

Me, well I like to have mine when I’m done working in town. I took my keys and water and left around 7:15. No one was at the Mat yet and the lights, which are on a timer, were not fully on yet. Within 10 minutes, so at 7:25, they clicked on. It isn’t so dark in there without them that I can’t clean or customers can’t go about doing their wash but it is so much brighter with them all on. It didn’t take me long to get through today’s chores. It was in pretty good condition.

I was on my way home just before 8:30 and left the place was spic and span. 😉 There was nothing in town I needed today so I came straight home and made myself a cup of tea with coconut oil and creamer. I remembered that Gayle had asked me to share the pictures I’d taken last night so sent an email to her and Donna including them. ‘Never miss an opportunity’ should be my middle name as I try really hard to get pictures of who we’re with. (Whether they like it or not) Those are the photos I enjoy looking back on.

I felt hungry and it was only 9 so had a few Shreddies in a bowl with a half banana. That hit the spot and then I set to work. The vacuuming has always been a chore I don’t like but a necessary duty. It doesn’t take long to do, more time is consumed getting the hose out and plugging it in – almost. With that done, I had Madame IP boil some more eggs for me and peeled them for in the fridge. Maybe devilled eggs but definitely some for my lunch.

With some apples from the freezer thawed in the fridge, I searched for a recipe for Caramel Apple Cheesecake. I found two, so kind of blended them to make it in Madame IP. I didn't know how it would turn out with a crumb topping but I wanted to experiment. That was prepared and just doing the NR when I heard a vehicle in the drive. I wasn’t dressed appropriately for company of any kind so did a double check before realizing that it was my sweetie home early. That’s nice. Much too hot to work a long day today!

It was just after 1 so we had lunch together. Bill had his sandwich and I had just set out my plate with some of the liver and coleslaw from last night. I’ll still have a bit of liver for another day. Bill had a snooze after we ate and I began searching on Amazon for a few items and found some good prices. I wanted to run it by Bill first and once he agreed, I placed the order. The delivery for the 4 items I ordered is mid-June so that is pretty good.

There are a couple of other items we’d like to order later but they weren’t available until late July or August and you had to pay for shipping because they didn’t come directly from Amazon.
With the Suite clean, I mentally ran through what was needed for our barbecue supper tonight. We’d planned simply on burgers with a salad and Rob and Pat were bringing dessert. Since Bill got home early we let them know they could come sooner than later.

I took a walk to the road and back and saw that the bird feeders needed filling and some of my flowers and vegetables needed a drink. It was very hot and humid outside, I never did get the high temperature reading. Using the hand pump, I noticed our little tree frog had returned. I guess this is his vacation home and I tried not to spook him while getting the water. He doesn’t seem too bothered by my presence. He is such a cutie! 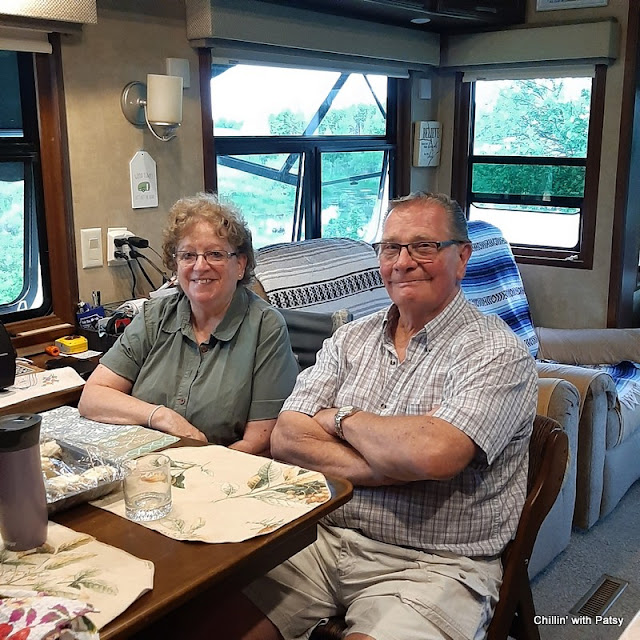 With everything taken care of I came inside and had a quick wash, readying for company. The Cedar Creek came up the drive about 3:45 and Pat came inside and we caught up while the guys set up their trailer. I need to decide what we’ll need to move over for us to use while the Suite is in the shop. CarStar will keep it plugged in so thankfully we don't have to empty the fridge and freezer. I’ll plan meals for 4 or 5 days on the outset, just in case. The boys started barbecuing around 5:30 and I prepped things inside.

It was a good summer meal, nothing special other than our company. Pat made some delicious rhubarb custard squares with cream cheese icing. My oh my, that is a recipe I’ll have to get. Sweet ‘Robert Bob’ brought me some fresh homemade rhubarb jam as well as a freezer bag of rhubarb. He’s trying to stay on my good side and I can tell you that it is working! 😊 We all tease each other a lot.

After clearing the table, I loaded the dishwasher and we realized that our fresh water tank read ZERO. Woops! We know they aren’t 100% accurate but also knew it was a necessity for Bill to go get us water in the morning.

Donna and Gerry arrived at the Acreage yesterday so he’ll wait until after 9 to go, not to disturb them too early. We watched a fun movie inside and with all the windows open after such a hot day, the air seemed to cool off quickly. Probably not as bad as I felt but in my summer shorts outfit I needed a blanket over my bare legs. Silly!

The movie we watched was 9 to 5 with Jane Fonda, Dolly Parton and Lilly Tomlin and Bill couldn’t believe that I’d never seen it before. I laughed a lot and that felt good. It was 11:30 before we dragged our bods to bed. Great, great day.

Thank you for stopping by. Sorry it’s a late post again, getting to be a habit!

Posted by Patsy Irene (Chillin' with Patsy) at 8:27 AM