One Year Ago Memory, Ridge Cleanup

The Ridge
Friday, June 26th. I thought about it early in the morning and pointed the date out to Bill regarding the special little box sitting on our entertainment centre. I spoke some words and forced myself not to get emotional, as that is still easy to do. Our little bum would want us to move on, don’t forget him, but move forward. Moving forward has been a topic of discussion just between the two of us, as of late. One day it will come to a decision, when we’re ready. 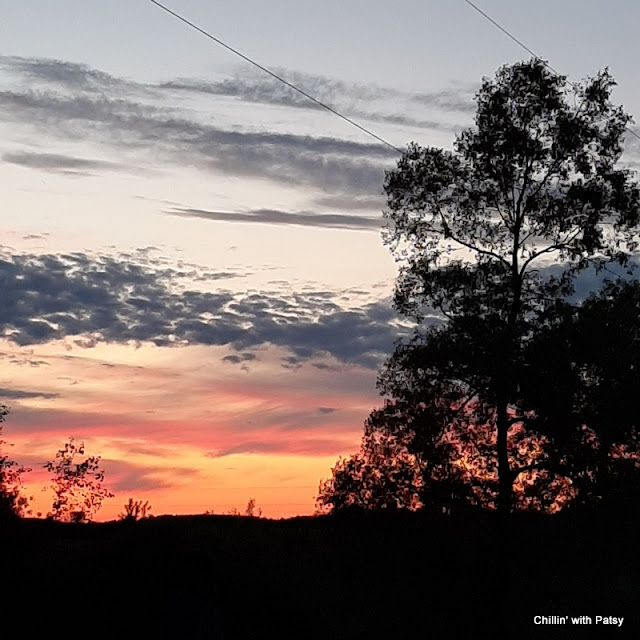 In case I’ve left you in the dark, we put Clemson down a year ago. We knew the day would come, it always does in one way or another. 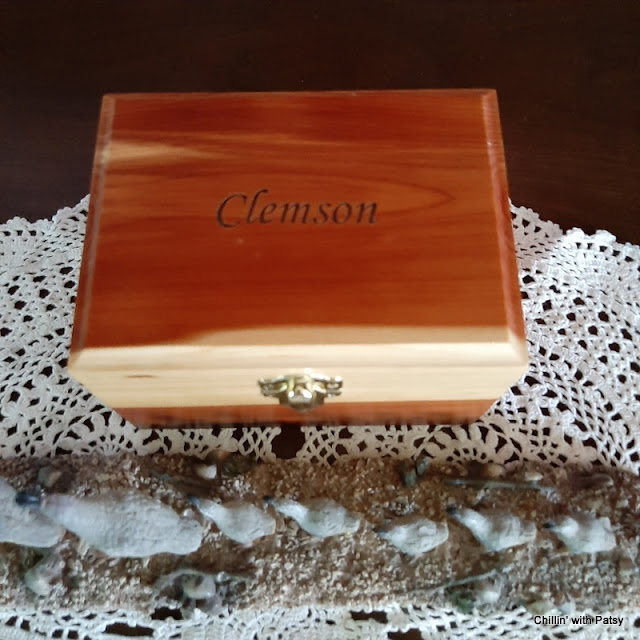 When you have a pet, it is inevitable but for Bill and I, it was a first. He was OUR first and couldn’t have blessed us with a better 15 years than he did. The best little guy, EVER! I have so many pictures of him that I knew if I started pulling them out, I'd be lost in tears. These are the things visible to us every day. So, we move on.

We were grateful to sleep in, at least not to be woken by the alarm. Neither of us had to go to work this morning. Yay! Of course, come 6:30 we are awake anyway and after some discussion about our aching muscles (good grief, we’re getting old!), we were up before 7. Bill made his coffee and I declined a tea and went for a much missed and needed walk. I thought it would help stretch the back muscles too.

I enjoyed the walk and took the shortened version, just to Turbine Lane and back. Such a beautiful morning! 13C/59F. There was a slight breeze which increased during the day to gusts to 15 mph. No critter sightings today.

Back at home, I had my tea while Bill went out to start the weed trimming. By 8:30, I joined him with my weed eater. He got it started for me and we went in different directions. I went to the corral hill around the garden area.

I won’t say it was easy, this ole gal puffing and panting, but it was necessary and I was determined to do as much as I could. Bill seems to take the job on with ease and speed but I do want to try and do my part to give him less to trim. I didn’t go any further than the corral, inside and around the outside fence but I think it was helpful to him. I have to know when to stop and he knows that.

I had to quit around 11 and we were both ready for some food. I changed out of my grass covered clothes (laundry tomorrow) and made us bacon and eggs with toast. That hit the spot. When finished dishes, I made myself a coffee and went out to sit on the patio. Bill had more trimming to do so headed to the Hangar area. It never sits well with me, sitting ‘well’ while he is still working so I got masking tape to tape the legs of our patio table so I could finish painting. I had the lip to paint orange under the table top.

In the shade, sitting on my cushion, I finished that job. Now, I was really finished for the day and put the paints away. Bill had completed his work as well and was happily in the Hangar working on his plane. Time for relaxing and enjoying the sun. I changed into my ‘only allowed in privacy’ bikini and took my book out to my lounge chair. Aaah, that felt wonderful. Even though we are pretty private, I’m always prepared for drop-ins and had my coverup beside me.

Good thing, as we were expecting a delivery from Home Depot and sure enough, I heard our UPS pal turn into the lane. We ordered the belt yesterday and it was delivered today. Isn’t that incredible? Before he left, I offered him a cold Sprite which he gratefully accepted. I like that, not afraid to accept an appreciative gesture. 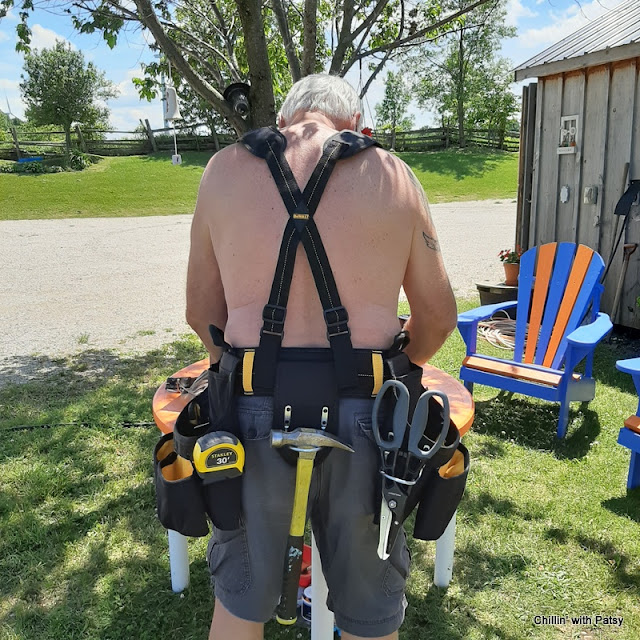 Bill came up and tried on his new tool belt. I’m impressed! So much lighter and easier on his body than the heavy leather one he was using.

Then, back to my chair and book. With an icy Sprite beside me, I found that I was starting to enjoy this Kate Morton story. The Clockmaker’s Daughter took a while to get into but now that I know who all the characters are, I’m quite intrigued. I sat and read in the Bunky for a while, as with two small fans and windows open, the breeze had it feeling quite cool in there. It was lovely!

At 3:30 I moved inside and began writing today’s post. Yup, hadn’t touched the computer all day. With NCIS on in the background, it was pretty cool inside too with the windows all open. For supper, a pork chop and chicken thighs again. When I take them out of the freezer, they are in packs of 2 or 3 so it does us for 2 meals. Probably just a veggie on the side, I haven’t decided yet.

Fast forward to 6 o’clock, Bill was inside with me and supper was starting in Madame IP. I cooked some baby carrots from the freezer in the inner pot on top of the meat. Then on the stove, I steamed some mixed veggies for Bill. Supper was so good. We may or may not have dessert. I feel quite full right now after dishes so maybe I’ll skip tonight. Maybe not!

This was a really good day in all ways. The weather was perfect, a lot of work was completed and we each got some time to ourselves doing what we want. I hope you’ve had a great day too.