The Ridge
On Tuesday, June 2nd Bill was up on schedule and I stayed put until 7:00. When I got up, I felt a little bit off. Just a tad dizzy so came down and sat in my chair with some water until Bill left at 7:30. He felt my forehead and although a wee bit warm, nothing to worry about. Later, I had a tea and some Shreddies with half a banana and strawberries. That gave me energy enough to get up and take some cards down to the mailbox for today’s pick up. She’d better take these!

It looked a bit damp out this morning as if it had recently rained but the day slowly cleared up. It was going up to 24C/76F today with a chance of storms tonight. When I came back in, I went upstairs with my blanket to try and sleep a bit more. That was fruitless, as it usually is when you are trying. LOL.  I at least rested and felt better for it. I didn’t want to rush into anything so remained upstairs for close to an hour.

At 11, I decided to put the tv on and found a cute movie, Eat, Play, Love. It was a bit silly in a couple of spots but it was about dogs (no spoiler here) being adopted among other things so I enjoyed it. Two of the star actors were Lindsay Wagner and Lee Majors so that was fun seeing them in their older years. He was not worth ‘millions’ and she was not ‘bionic’ in any way. 😊

When it was over, I made myself another nice lunch plate and had a coffee with it outside at the table. Back inside, I cleaned up the few dishes and then stripped and remade the bed, slipping the duvet and cover under the bed and placing our chenille bedspread over the sheet. We have been discussing getting rid of the heaviness during the summer. Last night, we noticed it warm for sleeping. I will take the sheets and our towels in for washing in the morning.

I knew I wasn’t going to work in the weeds today so instead after a walk to the corner (the cards were picked up) I painted a few rocks in the cool Bunky. With those done, I sat on the patio with my book. I was waiting to hear that Bill was on his way home and he texted just after 4:30 with that news.

My surprise visitor today was a turtle, she came right up beside me in my chair and sat there until Bill returned. Cute!

We came inside and I started supper after 6. Pork chop for Bill and a fat chicken leg for me with salad on the side. Tonight, maybe we’ll be opening that new carton of Chapman’s black cherry ice cream. 😊

We received an invite to join my two sisters and their hubbies for supper on Thursday so that will be a nice change. We’ve also made plans for a bbq here on Friday night with our buddies. That will be nice too. A small way of thanking them for just being who they are.

So, supper for us was consumed by 7 and cleaned up soon after. It was very good. The chops and chicken get cooked together for 10 minutes and NR for 8 minutes. They turned out perfectly. I decided to go for a walk down the lane since my step count was hurting today. 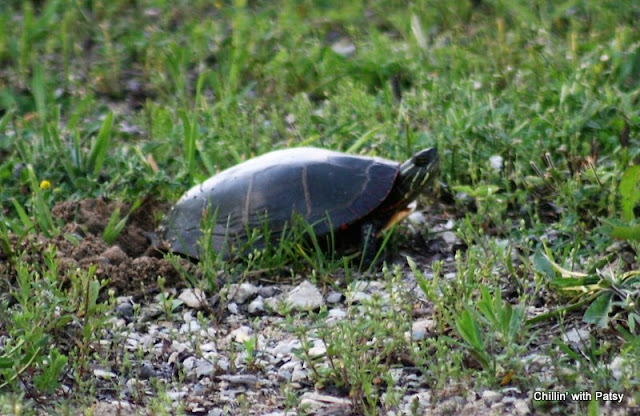 When I returned, I downloaded my very few pictures and published this post. Not much to say yet I sure manage to ramble.

It was a quiet, slow moving day for me and yet I still enjoyed it. At 9, the rain and thunder started. Sounds like a gentle rain shower tonight.