A Busy Day Ending with a Nice Dinner Out

A short catch up of my day on Friday, Feb. 27th because I’m late. Bill had the day off, as I mentioned before, but he had Black Beauty parked in front of  Ptooties so needed to get up and dressed too. He had planned some shopping in Hanover so we both left Paisley at the same time. I followed him. 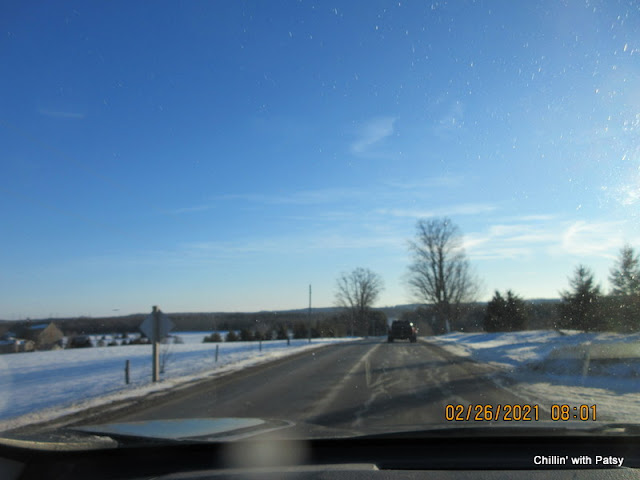 The roads were clear and dry and the sky was looking to be clear and dry as well. 😉 I carried on when he made the turn into Walmart around 8:30. There were some washers being used when I arrived at the Mat. I needed fuel but when I called Bill using Bluetooth, he said we could get it tonight. I was trying to save time today. I finished at the Mat with a quick wash after everyone had left and met another customer at the door.

When I headed out to Mitch’s it was a few minutes before 10. He had the shop all heated up and I set to work. Sanding, taping and papering the other side and back window for primer. After sanding, I remove the tape and retape. Also, after primer, I remove the tape and replace with new for papering before painting. It is all time consuming and before I knew it, it was after 12! I wasn’t hungry so didn’t eat anything.

At 12:45 we hopped in his old beater truck and drove to the Markdale, Grey Road 12 to pick up a load of wood for Mitch’s wood stoves. Mick usually delivers (for a fee) but has been overwhelmed with business that he couldn’t for a while. This was a neat outing. I’d never seen a wood cutter, splitter like this and to see it in action was quite cool. With a full pick up load for $50, I thought ‘what a great deal!’

I had some cheese, pepperoni and coffee then worked away back at the shop; Mitch would unload on his own time. At 3:15 we papered the windshield, he paid me and I drove for home. I made one stop at the BizyBee Auction house to pick up my winnings from Wednesday and booted for home. I showered and we dressed for dinner. Not at The Paisley Common tonight, but we were meeting my two sisters and their hubbies at Chuck’s Roadhouse back in Hanover. We made it just before 5:30.

It was a good meal, I had quesadilla and a smooth Cool Blue drink. 😊 Vodka, Curaco and Sprite. Yummy. Bill had a Bacon cheeseburger and it was good but for the extra cost, we agreed that we both got more food across the street. Plus, we waited 45 minutes for our food, which can happen in a busy restaurant. That is a nice vote for the Common. We all went back to Donna and Gerry’s for another hour or so and headed home by 9.

I was tired and knew this wouldn’t get touched when we got home. I crawled into bed and finished the last two chapters of The Night Fire. Bill will like it too. Even though, I didn't stop from 6:30 am to 10 pm, it was a great day and Bill enjoyed his as well.

Posted by Patsy Irene (Chillin' with Patsy) at 7:51 AM

Email ThisBlogThis!Share to TwitterShare to FacebookShare to Pinterest
Labels: Go go go - then eat and visit
Location: Paisley, ON, Canada