Monday, February 1st arrived without a flourish, other than some bitter cold temperatures. For those of you who live in the far northern regions or out in Cold Lake, Alberta, just ignore the word ‘bitter’. It is bitter for us here, and that is all that matters.  (PS - on the news tonight, I see that Alberta is at 1C and that's what we'll get on Wed. & Thurs.)

Bill was up with the alarm and off to work before 6:30 today. He would be taking Black Beauty to Billy’s to pick him up and then to the jobsite today. An issue with Billy’s vehicle. Hope it’s not too serious. I got up soon after and after getting washed for the day, went down for my cup of tea. I read a few blogs to see what our friends are up to.

It was just around 8 am when I left the house and sat in Ptooties for at least 5 minutes to let her warm up. The temperature was -14C/6F, feeling colder than that with the wind chill. The cold air in my face was like a slap but I wasn’t out long. I’d rather sit in the cold car, waiting for my seat heater to warm up, than outside scraping the windshield. I was in no particular hurry. 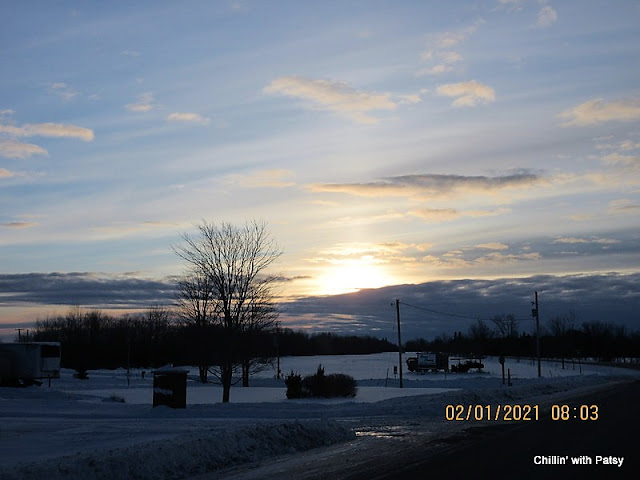 The roads were clear as was the sky with the sunshine making a nice display of getting up. I wish my morning rising was half as glamourous! When I arrived at the Mat, a lady was just leaving with her laundry and a young man was just transferring his clothes from washer to dryer.

I had just finished cleaning the washroom, emptying the lint trays and wiping out all the washers when another nice young man came in. When he saw me after bringing in one load, he returned with a mask on. 😊 He said he had a ‘truckload’, and there was no exaggeration there, and asked which machines I’d like him to use. He was concerned about getting in my way, which I thought was sweet.

He made 4 trips out to his truck and actually used 10 washers. There are children in this family, no doubt, and he was designated the job today. Later, I learned that they were renovating and their laundry room wasn’t finished yet. Another lady arrived, coming in the door laughing. “I think my detergent is frozen!” Too funny. She also is in the midst of renovation (I had never seen either of them before) and had put the clothes and soap in the car last night. The young man offered her his.

When I left, they were both still loading machines and I was happy to be done the job, floors included, out of ‘their’ way. I had only one stop to make today and it was on the outskirts of Hanover. Last night, I chatted back and forth on Messenger with my cousin, Harvey. He and his wife do jigsaw puzzles too so we agreed to exchange. What else is there to do? he said. Puzzles and read. So, I stopped and dropped the only one I had finished and picked up their 500 pc. one.

From their doorway and me on the porch, we chatted briefly before I headed on out. I wish I had room to do bigger ones, they have a lot of nice looking 1,000 pc. puzzles. Oh well, I’m happy with this and that gives me 4 to work at. Back at home, I took my thermos of coffee upstairs with some yogourt and for lunch had a bowl of soup.

Wes got called in to work this afternoon, which is nice for him to get out, and Susan and I worked on our stuff in the garage. By 4, it was darkening up in there so we came in. I nipped up to check the mail and then made myself a cup of tea. Bill texted when I was just finishing making whipped cream for our pie so I unlocked the door for him before moseying up to our room. I wasn’t keen on a walk today; I’ll do that tomorrow on my day off.

Bill and I stretched out on the bed and chatted until it was time to go down for supper. Tonight, was a mishmash of leftovers and it would clean out 4 dishes from our fridge. I fried up the few potatoes from last week plus I sliced up the baked potato from Friday. I rewarmed the last of the vegetable/corn casserole from last week plus the broccoli/carrot veggies from Friday night’s meal and then rewarmed the leftover roast beef slices from then as well. There was lots left.

Everything tasted great and then we had a piece of cherry pie with yummy whipped cream on top. Bill had made his lunch before we ate so after dishes, we traipsed upstairs to our room for the evening. I went in at 7:30 to watch Jeopardy with Wes and Susan and at 8 pm, Bill and I went down to watch 9-1-1 together. I’m not sure why I feel tired, it was just a normal work day but maybe because of the lazy weekend, even an hour of work was tiring. 😊

This was a good day. I hope you can say the same for your February 1st. I wonder if the groundhog will see his shadow tomorrow? Virtually, of course. Did any of you notice in my title that I said "Three Things"? This morning I heard on the radio that a wife asked her husband to name his 3 favourite things in January. I pondered that question on my way to work. Not as easy as it sounds but I came up with 3. Can you? I'll tell you mine tomorrow!

Posted by Patsy Irene (Chillin' with Patsy) at 7:10 AM