On Wednesday, Feb. 24th I watched out the window to see Bill leave. It was just after 6:30. Then I got washed, made the bed and got dressed. Maybe not in that order. 😊 After my tea, I, too, took my lunch goodies (banana, cheese, pepperoni and coffee) and pulled out of the lane. My time was 7:50, a bit earlier than normal with no car to clean off. Yay! The weather Gods were good to us overnight.

What a difference in a day of driving today. The main roads were bare and mostly dry. Bill suggested not to take the Concession 8 road since they came across someone who hit an icy patch and went over into the ditch. They saw headlights so knew it had just happened and stopped to help the young man until the police arrived. Bill and the policeman's guess was speed. Nevertheless, I was happy for the warning and happy to stick to the highway!

I arrived at the Mat before 9 and set to work. Two customers, one friendly, one not acknowledging anything (?), but they weren't in my way at all. I was out of there by 10. The toilet was the only disappointment today, good grief, someone was up to no good. Thank goodness, I only found t.p. (no shortage here!) at the bottom of the clump. Sorry for that visual but I like to share! 😊 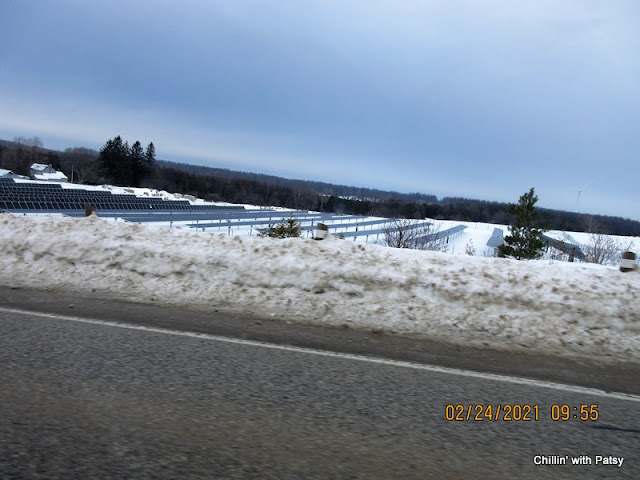 Mitch had texted last night asking if I could and would possibly work 5 hours today instead of 4. He wanted to get the Dodge ready for priming on Thursday so it would be a job of taping and papering. It doesn’t sound difficult (and it isn't) but doing the detailed taping on the doors of the words takes time and precision. I’m happy to say that I’ve become better at it and it doesn’t take me as long as it did on a couple of previous vehicles. I finished RAM 1500 on each door first.

Then, I covered the front bumper and the wheel wells at the front. They are plastic so we don’t want to paint under there. Fred, the owner, was in this morning when I arrived at 10 and was pleased with what we’d done so far. When I entered, Mitch said, “Here’s the boss now, I’d better get to work!”. Funny guy. So, I set to work and carried on until 3. From the front doors forward, everything is ready to prime. He now calls me his Assistant Manager. 👀

Weather permitting, I’ll finish sanding the back passenger door, covering the window and work on the tailgate letters on Friday. The drive home was pretty normal and uneventful. It was slowed down a bit by a driver that I almost would swear on that he was impaired, his speed between 90 and 60 kph all the time I was behind him. Overreacting to things was another questionable trait so I kept my distance and took a different route home than I would have when he turned.

Also, the school bus on #19 slowed me down but it was clear sailing the rest of the way. I was home by 3. I did the dishes and Bill and I chatted on text a bit about the horses on the back road. All of the Clydesdales were out along the fence but I couldn’t stop. It would have been a great photo! Oh well, hopefully I’ll see them again. He reported later that they weren’t out when he came by 30 minutes later. ☹ He was going to try and get that picture for me.

For supper tonight we had mini sausages, potatoes and creamed corn. How does anyone serve it without it spreading across the whole plate? Ha ha, no matter, we both like it. During the prep, I was bidding on the BizyBee auction again so didn’t stray too far from my phone. It is all just for fun, nothing imperative but neat if I win something too.  We had our last piece of cheesecake for dessert and did the dishes together.

Upstairs, I skipped Jeopardy since a few auction items were closing but I caught the last few seconds to see that the fellow from Toronto, Canada won for the second night. Yay! The auction items do not all close at the same time which is kind of nice, giving bidders an opportunity to keep an eye on more than one item. The rest of the evening was quiet after a good, fulfilling day. More cash in my pocket! Yeah, seems I'm spending it pretty quickly too! 😊

Thank you for your visit today. Not much changes in our daily routine but that’s what makes it ‘routine’, I suppose.