A Snowy River Walk on Valentine’s Day, Messages in White

On Sunday, Feb. 14th my Valentine sweetheart and I were awake and up around 8. I probably could have risen an hour earlier but with Bill still sleeping, I didn’t want to disturb him on a day off. We don't spend much on each other on this day but it has special meaning to us. In 1994, it was Valentine's Day when Bill and I became a couple. It was bumpy to start but bringing me roses sure set the right path! Today, we exchanged beautiful cards and some special little goodies. We sorted our laundry and he carried it down to start wash. We made our drinks while we were down there.

The snow that was falling last night had stopped sometime overnight and had left a clean white blanket on the vehicles. Bill went out to see if Black Beauty was in a good mood enough to start but no, she wasn’t. Later, when he tried, after the sun was on her for a while, she obliged. Eddie was outside shoveling some of the lane and the front sidewalks so they chatted a bit. He was kind enough to clean off all of the vehicles too. Eddie, I mean. 😊

Upstairs, we dabbled on our laptops and although mine seemed to have had a bit of a freeze-up, it eventually came to life. When the laundry was completed, we had our lunch of bacon and eggs with another hot drink and a cupcake. They are good! After dishes, Bill moved the vehicles around so BB was at the back and Ptooties out front. We’ll take her to Durham in the morning. 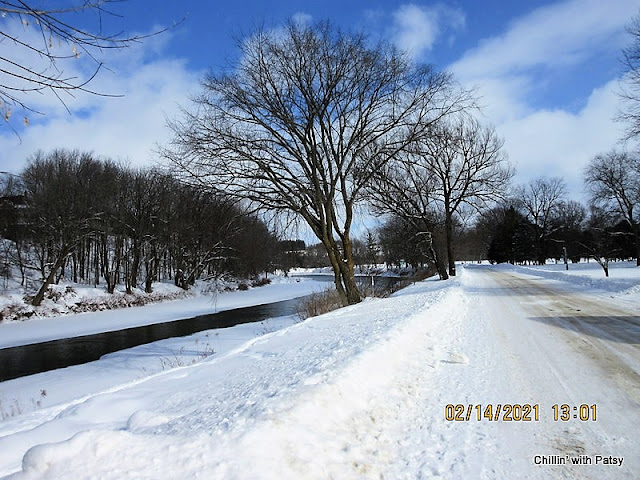 The sun was out and off and on, and the snow began again. It will be this pattern throughout the day. When we woke up, it was -22C/-8F, which should explain why I waited to go for my walk until it warmed up. By 1, it was a ‘balmy’ -9C/13F so I dressed and headed out. Bill said it wasn’t feeling too bad in the sun and the wind wasn’t too strong so I didn’t need my mad bomber hat today. Instead, I wore my wool ball cap with the muff covering. It was plenty warm.

It was wonderful. I walked down through the campground along the river today. It was actually very pretty with the snow falling and easy walking. I wanted to write something in the snow but it was so deep to get to any clear area that my options were getting scarcer, the further I walked.

Just before heading off the snow plowed track, I saw the opportunity. It was still knee deep but at least I didn’t have a snow bank to get through. 😊

After i got home, Bill went down to the basement to work on his plane and I went out to the garage to work on the puzzle. I was feeling a bit overwhelmed at first, not sure where to start. The puzzle makers drive me nuts. They put the picture on the front of the box but then slap writing on this corner and that corner so you never really get the whole picture. What’s in that bottom corner? Makes it difficult to look for pieces. Some, but not many, include a poster inside. That’s my Puzzle Pet Peeve.

Once I got going, I was doing pretty good. I made a cup of tea and returned upstairs. Today, my upper left arm has been throbbing again. When I carried the basket of clothes upstairs earlier, it started. Not that it was heavy, it wasn’t at all, but I guess my arthritis (which I think it is) decided it was time to flare up. Bill rubbed some heat lotion on it for me and I took some Advil. After working on the puzzle, it was starting again so curled up with my book for a while.

At 4:30, I mixed up my recipe for meatloaf. Our Valentine’s supper would be a nice one, with mashed potatoes, veggies and of course, a cupcake. With the meatloaf in the oven at 5, I set my timer for 45 minutes and came upstairs. I went down and started boiling the spuds and choosing what vegetable. Bill will have corn where I have a few choices.

As a celebration of our love (mushy, eh?) and Valentine’s Day, I opened a bottle of wine. The bottle of wine that I found in the recycle bin at the laundromat weeks ago. It is very good! I’m not a fan of dry white wine so added some ginger ale to mine but we each enjoyed a glass together, toasting over the meal. 😊 What a nice supper, the meatloaf was perfect.

After dishes, I came up to work on today’s blog and we spent the evening together.

This was a really nice day. The clothes are clean for another week and although we had snow at different times during the day, we didn’t get dumped on. I have work in the morning, Family Day, but Bill has the day off. He will likely go with me.

Happy Valentine’s Day to all of you! I hope there was something special in your day. Thank you for popping in!

Posted by Patsy Irene (Chillin' with Patsy) at 7:47 PM