Some Days I Feel Like Tigger! Hugs with Hadley Rose

Bill and I were both awake around 7:30, me after a great sleep. I was in bed by 8:30 and had the light off soon after. Bill was downstairs watching a movie from 8 to 10 and I was long gone when he crawled into bed. He had a restless night though; we can't figure out his sleep regimen. There were a few things on our morning to-do list so we set about those.

I had a blog to finish posting and that seemed to take forever. My laptop curser had disappeared so I had to do a hard close and start over a couple of times. That takes time. Bill wanted to vacuum so he did that after a wee fix it job on an swan’s wings. The little musical carousel I bought at the auction had one broken but it was from me transporting it. The original picture showed it intact. My bad. ☹

With his 1-minute epoxy, it went back on and I will be sure to point it out to Jess so she can keep it in a safe place. After finishing my blog, finally, I got washed up in the bathroom and then used the gift bag to pack up the blanket I made for Hadley with the little baby headbands. Not sure yet how to transport the carousel but we’ll figure it out. In case you haven’t gathered, we are going to meet our new granddaughter today! 😊

After wrapping the gift, Bill had his shower and curled up on the bed, hoping to get some shut eye for a few minutes. I took the opportunity to walk across the street to find something at Pasttimes for (little) big brother, Easton. I don’t like it when one child so young doesn’t get a gift when the baby is showered with treasures. I hope he likes what I found; I like the store and the owner is really helpful.

Around 11:30, I started frying up bacon and eggs for our brunch. We had planned to leave around 12:15 or so. I can’t believe it is still winter – today – the sun is out and no matter what the temperature is reading, it feels like we are in the +digits. I didn’t even wear a coat down when I went out, just a heavy sweater and scarf. It might be too chilly to go like that for a walk but I sure wouldn’t need too much bundling.

I stopped to mail a card and also stopped at FoodMart to pick up our lottery tickets. Still no luck, but every other week, we’ll still try. We had bacon and eggs with toast for brunch at 11:30 and were dressed and out the lane at 12:30. We took our winter coats along but each of us just wore a sweater. Nothing else was needed for the sunny hour and a half drive. It was a beautiful -3C when we left.

We arrived in Stratford at 2 and made our way in to their building. As we neared the hall corner to their apartment, we could hear Easton running towards and into Grandpa’s arms. So sweet! He grows so quickly, each time we see him, we notice changes. Inside their place, beside Matt was the tiny little Hadley. Her little butt in the air as she slept. 😊 We forget how little they are!

We chatted and waited for a while, as Jess opened the gifts and Easton opened his toy. Then it was time to wake the babe, Grandpa was anxious to hold her. Easton and I played with his little pirate men on the floor and it was very relaxing. Easton needed attention too and he is such a charmer that he definitely held us captive with his entertainment. He’s a typical ‘almost 2’ little boy.

After a diaper change and a feeding, it was my turn. Hadley was awake while I held her and when she became fidgety, I put her on my shoulder and she promptly fell asleep. 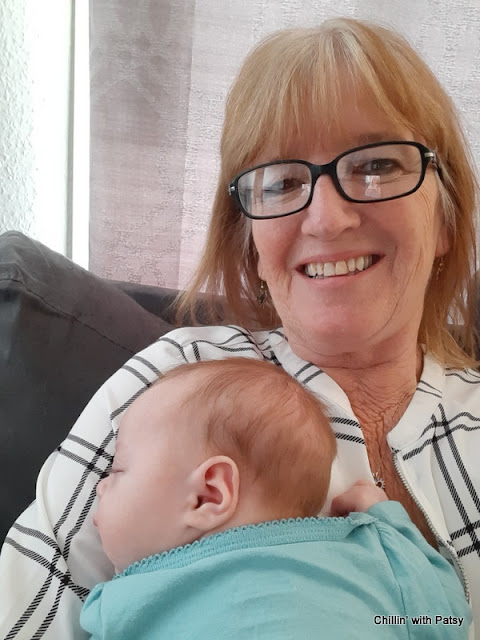 She ways 9 lbs+, Jess informed us, but felt like nothing after I’d had Easton on my lap. We read stories, played with his barn and animals, his pirates and dump trucks. The words he’s saying are not easily understood but with each visit, it is obvious that his words are clearer. Quite the little jibber-jabberer. 😊

We left at 4:30 and since it would be 6 when we got home, we decided on a bite to eat before leaving Stratford. We like A & W but couldn’t find it so went instead to a youth-time favourite of Bill’s. Ken’s French Fries was a chip wagon in the parking lot so we had those instead. Bill just had fries and I had poutine. Yummm, they were good, nothing like greasy deep-fried chips.

On the drive home, we came through mostly sunny skies but then on the north side of Harriston we drove through a mini snow shower, it cleared and then in Paisley, the same thing. Strange weather patterns. We were home by 6:30. We both changed and Bill went in the other room to watch their Saturday night movies. 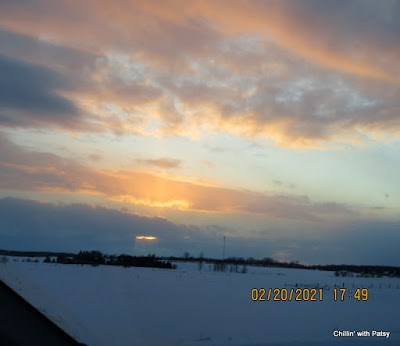 After not having success hooking mine up, for some reason, I worked on my blog and then crawled up on the bed with my book. I don’t know how long my eyes will stay open but I’m gonna try to get a few chapters read. I’ll finish my post in the morning. This was a great day. We’ve been waiting for the ‘freedom’ to visit our daughter, her husband and our new granddaughter. It was perfect.

Posted by Patsy Irene (Chillin' with Patsy) at 7:45 AM