So, here in our neck of the woods, Tuesday, Feb. 2nd means we wait to see/hear whether Wiarton Willie will see his shadow when he pops up out of his burrow. Even though there won’t be any gathering this year, it will be a virtual thing. We went about our normal business. Bill was off to Billy’s by 6:30 (btw, Billy got his car fixed yesterday so that is good news) to ride with him in the work truck.

I tried to drop off, not feeling like I did, but found it to be 7:30 when I next lifted my head. I find that so funny! It seems like I’m just laying there thinking the whole time. I had nowhere to be this morning at any given time, so I got dressed and went down to get my cup of tea. Wes and Susan were up already, but I only saw Wes to say good morning. It was another cold start to the day. -11C/10F or so.

When my tea and blog reading was done, around 9:30, I got bundled up for a walk. Today, there was a slight wind so I wore my fur-trimmed frontier hat. 😊 I don’t know what it is called but that’ll do. I was so warm around my head and face that I don’t know why I waited to wear it. Well, I do. I wanted something for these colder days so I would appreciate it more. And I sure did today! 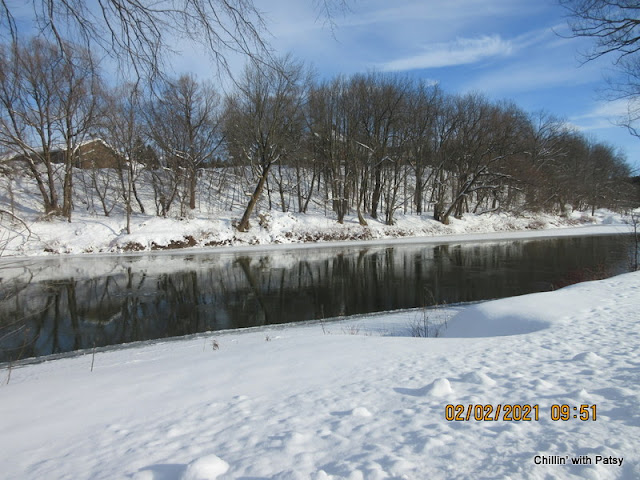 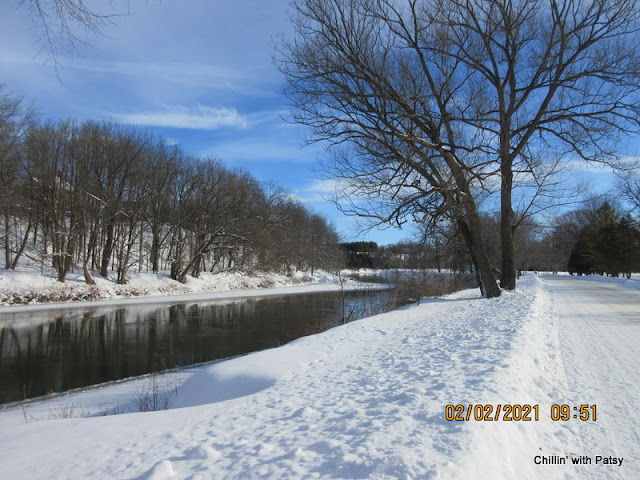 I walked down Water St., along the river, through the campground/park and back up the other side. Following the back streets of Paisley, pushing myself to go up a few of the steeper streets that took me back to Queen St. S and back home through the downtown. It felt invigorating and with that beautiful sunny sky, I was feeling pretty good. When I returned inside and made a coffee, I came upstairs to do some more online reading when Susan told me we had mail. Still not the credit cards but mail all the same.

It was time for my shower, which I took care of and then took the time to blow dry my hair. Downstairs, Susan was doing the same thing. 😊 Wes had left for work so it was a lady’s gab fest about hair and stuff. For lunch at 12, I went down and fried myself a nice packed quesadilla. 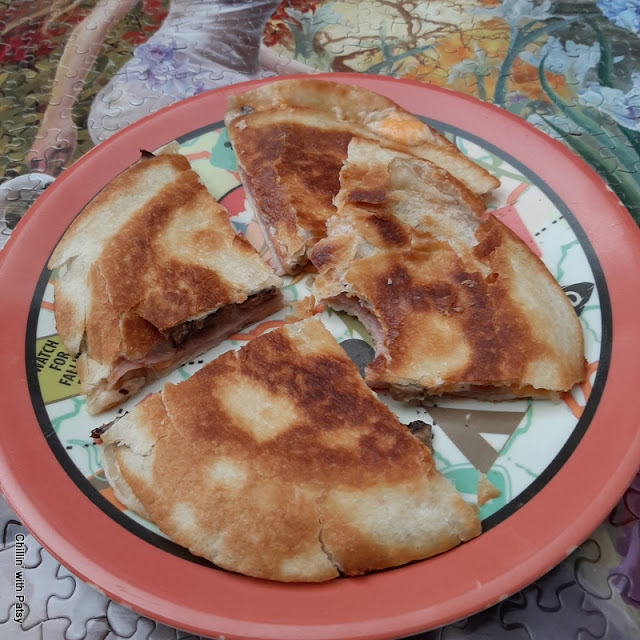 Ham, cheese and mushrooms and took it out to work on the puzzle. I was almost sad to work on it because I knew it would be done soon and I was really enjoying it.

After lunch, Susan joined me and kept me company while I put the last pieces in. Ta-dah! We went into her office and she showed me an online auction site they’ve been following. Hmmm, some cool stuff on there! Not that there is anything we need but it is still fun to look and it kills an hour. At 3, I made a cup of tea and came upstairs to start my blog. This morning, I spent a bit of time copying recipes for keto snacks into my Word document folder so I printed a couple off. I get emails that have some nice ideas to try.

It was 4:45 when I went down to the kitchen to start prepping supper. I hadn’t heard from Bill yet and that concerned me, a bit. I’m not too much of a worrier and hate to come off that way so it wasn’t until 5:00 that I thought it odd. I texted him and was happy that he was on his way to Billy’s and would have texted in a few minutes, had I waited. 😊 For supper, I was making spaghetti. Hmmm. Sounds like a plan.

I couldn’t find any more ground beef (or ground anything) in the freezer this morning so I had to get creative. I brought out a package of 3 Italian sausages and a package of 5 mini sausages to thaw. They would work and indeed they did. I emptied the sausage casings from the bit ones and fried the pork up with onion, spices and the cut-up minis. I added mushrooms once the meat was almost cooked and then the spaghetti sauce. It simmered until around 6. Time to eat.

In a pot on the stove, I'd cooked the noodles for Bill and in the microwave, I cooked a portion of spaghetti squash for me. This would be my noodles. Yum, supper was good with the last of the cherry pie topped with whipped cream for a finale. There is some sauce leftover so I’m going to have to get creative with that for another night. There isn’t enough for two. Planning suppers isn’t always easy, but once I know what we’re having, things come together pretty good.

We did dishes, Bill made his lunch and we climbed the stairs to our room. We’ll think we’re in a 5-star motel when we return to the Suite simply because of the few stairs we’ll need to climb! Ha ha, the exercise doesn’t hurt us. I went into the other room to watch Jeopardy at 7:30 and because NCIS isn’t a new one tonight, ☹, we spent the remainder of the evening ‘alone together’. Sounds like an oxy-moron, doesn’t it?

Thank you for taking the time to check us out today!

Posted by Patsy Irene (Chillin' with Patsy) at 7:30 PM