On Friday, Feb. 5th I heard Bill get up with the alarm and I rolled over. He went about getting ready and I could hear him, off and on, between dozing. I assumed that the weather was fine since he was getting ready. Next thing I knew, he was crawling back into bed with me and it was 6:30. “A day off, the roads are terrible”, was his comment.

That made the decision for me too, although he said if I ‘really’ wanted to go to Durham, he’d take me. Um, no thank you. 😊 It was indeed a blustery day out there and there had been about 4” of fresh snow that had fallen overnight and still snowing. Plows had been through but with the forecast of more to come today, tonight and tomorrow, we were best to stay put for the day.

Bill was able to drop back off to sleep, which was nice for him, but I was wide awake. I checked my phone, played a couple of online games and then at 8, tried to get out of bed without disturbing him. That never works and today was no exception. He lay there for awhile and I went down for our tea and coffee. His was already made in his thermos so I brought that up for him.

We did some online blog reading, some online auction perusing (there is one in Owen Sound that closes on Feb. 11th) and when that was done, I felt restless. I need to clean the floors and thought today was the day but it just didn’t feel like it was going happen. It feels like Saturday, naturally, with both of us home together.

At 9:30, I texted Jamie to inform him that I wouldn't be cleaning and then I went down to the garage. It was too early for a coffee so I worked on the puzzle until after 10. Bill joined me for a while and so did Susan. Then after Bill went down to the basement to work on his plane, I made a coffee and went back out to ‘puzzle’ away. The light was not great but I was insistent and persevered.

Susan and I had a conversation about some audio books that she had and I showed her my portable cd player (Walkman). After doing that, I took it out to the garage with me and listened to Pokey’s cd. I need to ask Wendy to make me a new one, if she can, this one keeps skipping, probably from scratches. I didn’t have it in a case. ☹ Or maybe I need to order one online, save her the trouble.

Working with music, when I was alone, was nice. Beebopping along to the tunes was fun and uplifting. Just around 3? I finished all I was going to do today. If I kept going, it would be done! I had an offer from Wes earlier to walk 5 laps in their house and he showed me the route. Too funny, we went this way and that way, around this table and that one, a few times, just to get the steps in. It was at least more interesting than walking on the treadmill! I will never remember the route.

It was too cold to go out for my walk, that blustery wind was uncomfortable looking. Bill and I walked across the road to order supper at the ‘new’ Marty’s restaurant. Excuse me, it is now called The Paisley Common. We met the young couple who are the new owners and chatted with them about their plans. The restaurant is in disarray but they seem calm and well-organized after just taking over on Monday. 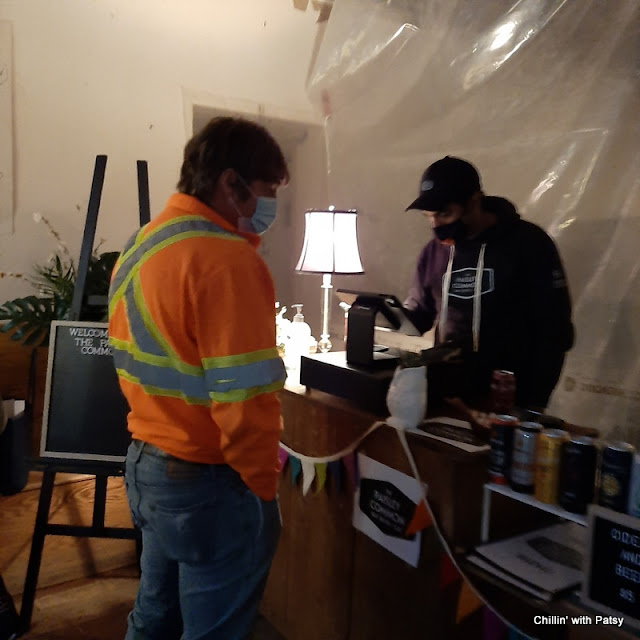 We walked further down the street to check the mail before returning to the house. I made a cup of tea and when we came upstairs, Bill curled up on the bed for his snooze. He was happy that he managed to accomplish a few things on his plane today. It is chilly down in the basement so he had to layer up but was soon too busy to notice. 😊 I’d meant to have my shower today but that also went by the wayside. Tomorrow is another day.

I stretched out on the bed beside my sleeping babe and finished my book, The Hillbilly Elegy. It turned out to be a very interesting story. It isn’t at the top of my list for favourite books, being a biography, but I’m glad I read it and got a better insight into the hillbilly life. I never would have thought it was like that. There were some comical things that had me laughing out loud, a lot actually, and that always endears a story to me.

At 5:45, Wes called up that they were done in the kitchen so we went down to get ready for ours. I walked over to the P.C. and although I had to wait a few minutes for our meals, that only meant they would be hot ‘off the grill’. The owners were both apologetic as 4 others came in and retrieved their orders, and each offered to bring it across the street to me. Who does that? Anyway, I declined.

I was content chatting with other patrons as they came and went. Lily from Lily’s Oasis, beside the bank was one and she remembered me from waving on my walks and commenting on her Christmas tree as she decorated it. It’s how we get to know each other in small towns. 😊 I think the wind had died down a bit as it didn’t seem to feel as strong. Then again, I walked pretty fast there and back.

Our meals were not a let down and really, they shouldn’t be. The chef is Marty’s son, Stefano, and the menu is exactly as it was. No price changes so we were both pleased, yet again. Our Friday night supper’s will seem very ‘predictable’ as my sister says, but I don’t have to cook and I enjoy that my hubby likes to treat us to a prepared meal at a budget we can afford. Upstairs, I went in to watch Jeopardy and at 8 Bill went down to watch one of his movies in the games room. This was a nice leisurely day. No complaints here although the snow didn't stop all day. Blech!

Thank you for popping in to see what we’re up to! Your comments are always welcome!

Posted by Patsy Irene (Chillin' with Patsy) at 6:26 PM