On Thursday, Sept. 30th Bill was up getting ready for work when I woke. Gibbs had been out and was back on the bed, behind me waiting for me to move. He’s so good up there and doesn’t bother us when we’re still sleeping. Today, is my sweetie’s birthday. Not a special one by number but special because of who he is. ♥ After he left, I went about making my tea. I felt cool so wasn’t keen on going for a walk. Wimpy me.

When I reached the Keurig, I saw that Bill’s travel mug was still sitting there, waiting for a coffee. Woops! I made my tea and then texted Bill that I would bring his mug for his 10 o’clock break. That worked out since I had already planned to take him and the boys some cupcakes. That was another frustrating thing from yesterday that I didn’t tell you. Bill reads my blog faithfully so he didn’t need to know that I made them. As it turned out, his nose gave my secret away. “Did you bake something today?” LOL

The frustrating part was when I couldn’t find my paper cupcake holders and greased the muffin tin, they all (24) stuck to the pan. Some so badly that they came out in a mess. Grrr! I frosted what I could (about 16) with peanut butter/chocolate icing.

So, you see? Yesterday was just one of those days. 😊 And I survived. Ha ha At 9:30, I got things ready, made his coffee and took it and the goodies to the work site. I’m glad I took 4, they had a new worker plus Mike was there.

Mike said I could let Gibbs out so he ran around greeting and having fun with his leash dragging behind him collecting as many dirt samples as possible. I borrowed Bill’s towel for the back seat when we left and Bill did a 3 (or was it 4?) turn to get Ptooties turned around in the narrow lane.

They have really got a project going there with the shed improving in leaps and bounds each time I visit. The fellow with the lift comes in on Monday to raise the roof trusses. Nice job boys!

Back home, I had my own coffee with a bowl of soup while Gibbs lolly-gagged outside, in his glory I might add. I still couldn’t shake the chill and there were far more clouds than I expected out there so the day just didn’t warm up. The sun makes a huge difference so it didn’t reach 16C/60F. Once the sun did pop out, I layered up and took my wagon to the big garden and up to the berm. 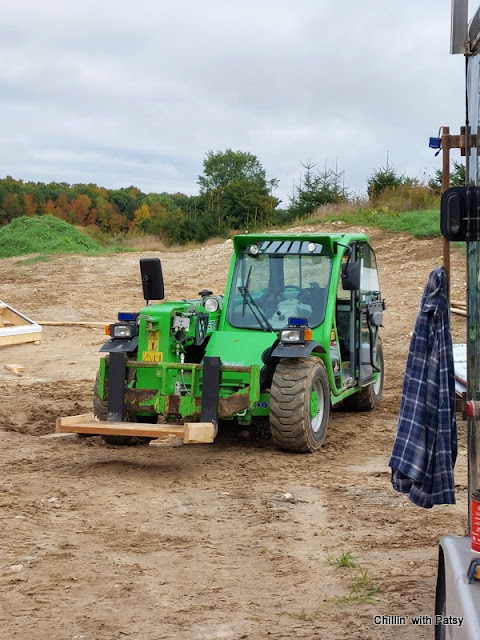 I gathered the many apples that had dropped off the tree up there and tossed many of them over the fence. Oh, I just remembered I left a pile behind my bin of mint. I’ll get them before Bill needs to cut up there. I clipped the hostas as well as the tiger lilies before walking to the veg garden and pulling the pepper and tomato plants. After dumping that load, the clouds moved back in and Gibbs and I walked to the mail box, no mail, and came inside. Aaah, warmth.

I had pulled a pound of ground beef out of the freezer with plans to make lasagna for supper. By the time, Bill drove in, I was saying between that and chili. It’s the chill that I’m feeling that is clouding my decision and I shouldn’t let that change my mind. 😊 Gibbs has gotten really good at jumping up on the bed so when he heard the truck pull in, he hopped up there and sat at the little window watching him get out. It’s quite endearing. ♥

So……the lasagna was delicious and we didn’t need dessert. We have leftovers for another night and I think everyone agrees that leftovers are great! After dishes, Gibbs and I did our outside walk and boy has it cooled down! Bill said that it will be going down to 3C/37F tonight! That just makes me appreciate the fact that I have NO veggies in the garden that I have to worry about. A not so good ‘crop’ year for me means I don’t have to pull my sheets out of the shed. 😊

This was a good day, nice and peaceful, just the way I like days off. My hubby is another year older which is always a great thing, isn’t it?

Posted by Patsy Irene (Chillin' with Patsy) at 7:24 PM