A New Day, A Different Day, A Fun Dinner with Friends

The night was good, Clemson listened to his Daddy “don’t be getting your Mother up through the night”. That was admonished with his goodbye kiss. We went up to bed at 10 and I set my alarm for 6 am. You know how it is when you ‘have’ to get up a certain time? You lay awake thinking about what ifs. Afraid the alarm won’t go off, afraid you’ll sleep in. Goodness! That’s what I did for what seems an hour.

Clemmy crawled under the covers in the wee morning hours and at 4:30 on Wednesday, May 15th I was awake. I couldn’t go back to sleep but I rested and waited until my phone did the Tango. My choice of wake-up music. I stretched and danced my wat out of bed into my clothes before coming downstairs for a tea. It was only 6 am but I texted Bill with confidence that he was also awake. I wanted him not to worry that I’d slept in. It was my first day of work!

At 6:30, I had to wake the little sleepyhead to go out for a piddle and I had some of my high fat milkshake to keep me going. I left him back on the bed and headed out the door at 6:45 am. The doors of the laundromat and the lights open and turn on automatically at 7 so I waited. I did get a key for the back door but it needs some filing. An old lock isn’t always compatible with a new key. I don’t mind waiting until 7 to get in for now.

I set to work and felt very comfortable emptying dryer lint screens, sweeping, wiping down the carts, ledges and wiping out machines. It took me longer than it would Jamie, I’m sure, but practice will get me in a routine and it won’t be as time consuming. In 2 hours I was out of there and the place was sparkling. 😊 I felt good about what I’d accomplished and there was no customer traffic to deal with for my first day. That was perfect.

Jamie had asked if I’d touch base with a customer who had lost $3.50 in a machine so he could reimburse her. When I did so, it brought me to the Co-operators Insurance office down the street. Turns out, the customer was the aunt of the former laundromat owners’ daughter, Connie. Too funny! We had a great chat as I’d met her in there cleaning many times with her Mom. She had some helpful hints and a few interesting stories from over the years.

Before I left for home, I stopped at Foodland for a few food items that we’d run out of. Back at the Suite, I made myself a coffee, had some bacon, an egg and some fried zucchini. I then adjusted some things on my ‘work’ chart, paid a couple of bills and hopped in the shower. The day was supposed to be nicer, I thought, but I’m not going to complain. At least it isn’t raining, yet. The sun rose just after 6 am but then soon disappeared behind the thick bank of clouds now covering the sky here. Bill says he has white puffies but also blue sky so I’m a bit jealous.

I don’t have plans to work outside anyway but sure like to see the sunlight coming in the windows. The carpet runner and mat we purchased in Quartzsite are lovely, we love the pattern and the colours. However, they are a pain to keep clean. The type of material they are collects lint, hair and fluff ridiculously! We’ve grumbled about it since we had them cut and laid out. The vacuum doesn’t seem to pick it up, just gathers it.
Then I was using my plastic head whisk-type broom. That worked better but it takes a long time. The other day I wondered about using an actual lint brush and that, although time consuming, works great! So, before sweeping the floors this afternoon, I was on my knees cleaning the mats and they look like new again. So, totally worth doing that rather than getting frustrated with them. Funny why they would even use that wool fabric for a runner.

I see that the mail lady stopped at the box. It very well might just be our flyers, but by 2:15 the clouds were pushed out by the sun. That looks a whole lot more encouraging! I was feeling quite tired though so before anything else, I sat in my chair with my book. Soon enough I pulled a Bill and put the book down giving in to a 20-minute snooze. I knew I didn’t sleep well or long last night so that would explain it.
When I sat up to answer a text from Donna, I decided it was time for a tea, then a walk. Creamy tea just hits the spot for me mid-afternoon. My own little Happy Hour.

Clemson has been up on the big bed for a couple of hours, he loves it up there with one of our pieces of clothing. Now he came down for nature’s call so when I do go down the lane, maybe, just maybe he’ll join me. We’ll see. 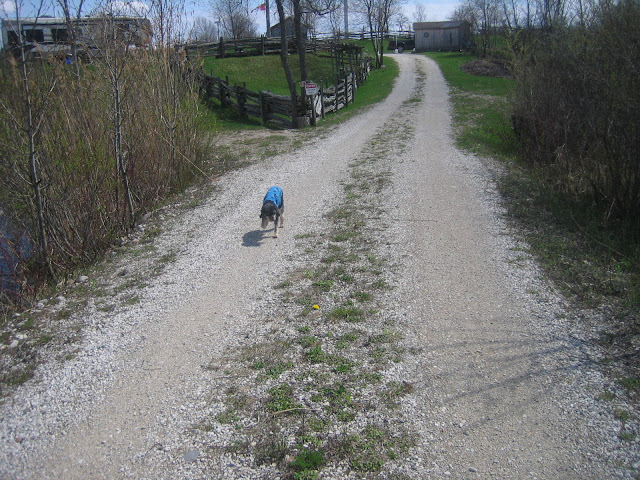 so, he did walk with me to get the mail today 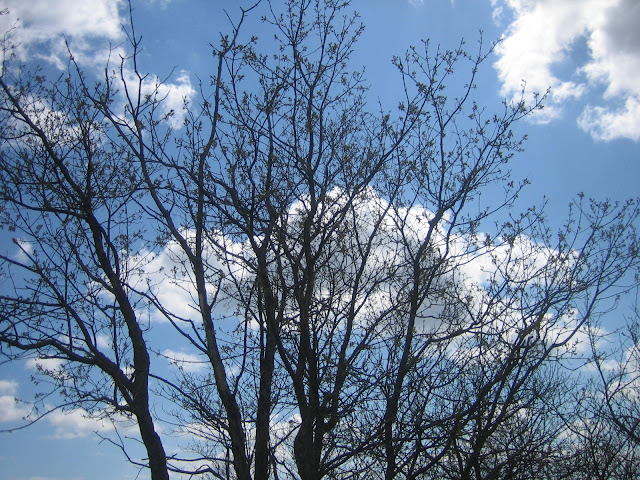 
I’ve put the toppings together in the fridge to take with the pizza crust to Rob and Pat’s. Yes, my buddies have agreed to test this pizza with me. A good ‘buddy’ test, eh? I fed Clemson early again and the two of us headed in to Durham around 4:30. 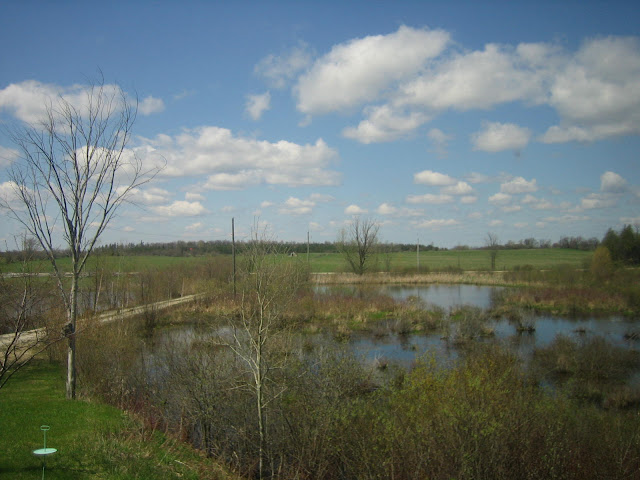 It was good to see our buddies again and we sat and caught up on each other’s news for an hour or so. Then it was time to put the toppings on the pizza and pop it in the oven. Green and black olives plus green onions on half and then red pepper, mushrooms, ham and pepperoni over everything. Topped with lots of shredded cheese. It sure looked good. In the oven for 15 minutes and when I brought it out, it smelled wonderful too. Lifting it off the parchment paper was the hardest part but the pizza tasted great! We don’t know if it was because of the toppings but it doesn’t matter, we polished off the whole thing. Yum!

Pat had made some creamy Jell-o so we each had a dish of that with some Liberte 10% plain yogourt. What a nice flavor that was, blended together, for a change. I enjoy this high fat plain yogourt on its own but must admit that their way of eating it is also a very nice treat.

Rob washed dishes, Pat and I dried and then it was time to wake Clemson up so we could head home. He had finally settled down on their pillow. I can’t imagine what goes on in his little head. 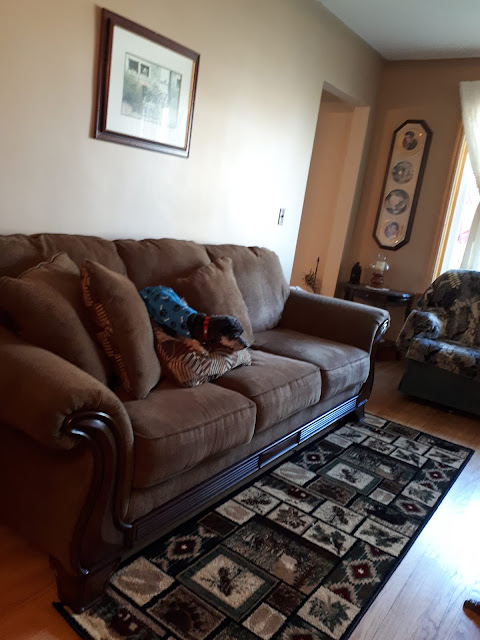 Back home before 8 and before dark, just the way I like it. I called Bill as we pulled away from the house to let him know we were on our way home. He was also done for the night, settled in his trailer with his book. I don’t know if I can keep my eyes open long enough to read any tonight but we’ll see after posting my blog. 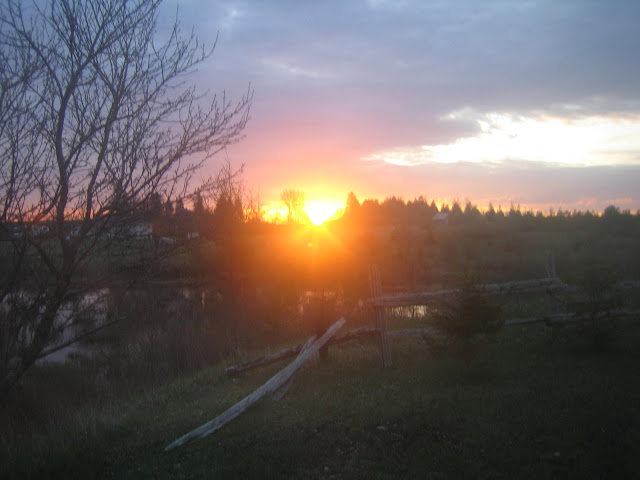 The sky is pretty tonight and the frogs are chirping. They haven’t stopped once let alone three times so the ‘real’ spring must be a long way off. LOL 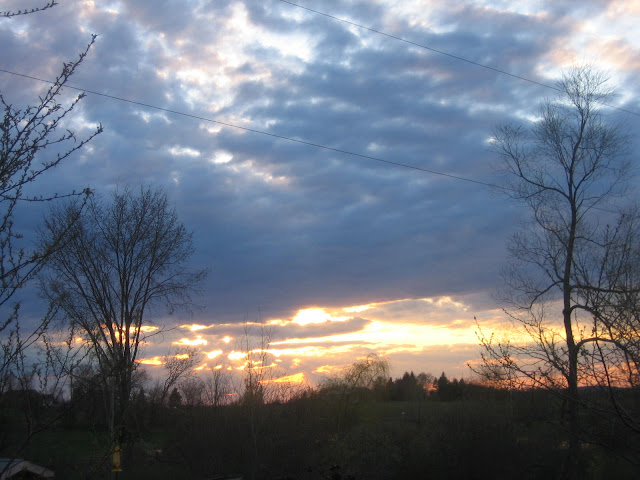 This has been a great day. A new experience, nice weather and good times with friends. This working gal has no complaints today. I hope you can say the same.