The Ridge
I woke up around 7 on Tuesday, May 14th after many hours (or so it seems) of dreaming. Wow, strange night and now they are gone out of my head but there were so many people from my past involved! Bill was already up and in the shower. He has a stress test in London this afternoon at 1 so he doesn’t have to rush but likes to be ready. It worked out well as CanAm also needs him to work this week. One trip, two events.

It was 40F/5C with minimal wind and the sun was trying its darnedest to poke through the cloud-filled sky. I wasn’t missing an opportunity so got bundled, appropriately, and went for a nice 2-mile walk. It felt so good to get out again in the early morning air and my legs complained for a while. It has been close to a week since I’ve done this. I’m sure my back will be better by just getting out walking. Maybe this is the turning point of the weather. 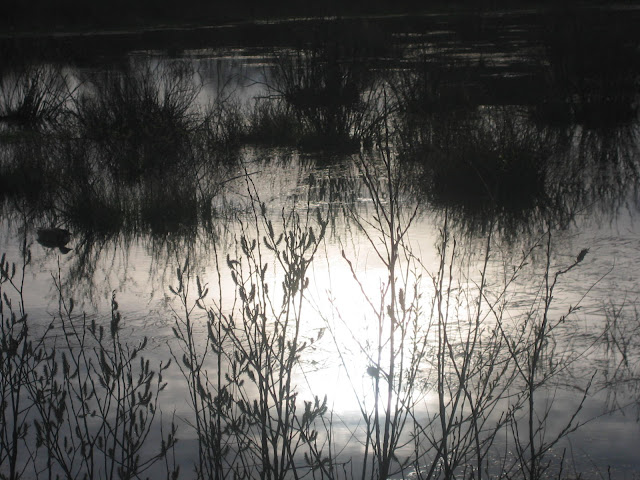 Today, shows promise of a warmer day and some sunshine later on. Heck, already at 10 o’clock it is warmer than it was all day yesterday. Yay! Bill pulled out at 9:30 and Clemson and I were left on our own. We don’t mind, really, especially now that the daylight sticks around until 8:30 ish. Around 11 I made myself a coffee after catching up on our friends’ blogs and started my own for today. 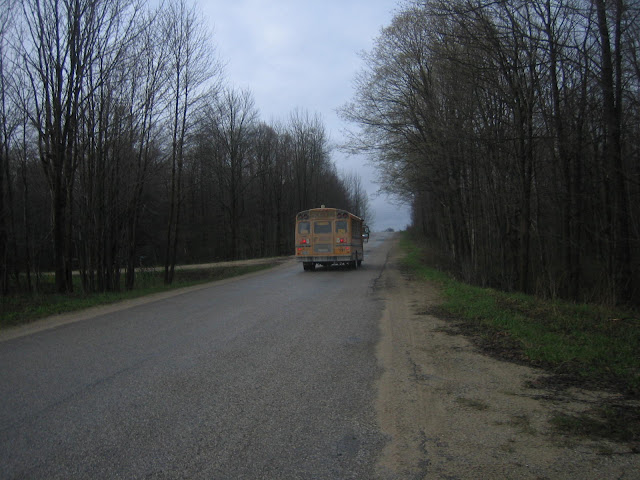 The entertainment out the window this morning is not much different from any other day. The geese on the pond. This is either a power struggle over the pond or it is a game of love. I’m now thinking the latter as I watch them swim around in pairs after chasing each other in flight. Ah, to know what they’re thinking. There are 4 today and have now matched up in 2’s. I can’t tell male from female so they leave me guessing at their antics.

I received a text from ‘Laundromat Jamie’. He’d like to meet after his work today to give me a walk-through. That is encouraging, even though this was planned, as it means he and his wife (and family) have discussed my proposal. If nothing comes of it, that is okay but even if I’m a backup for them, I would like the opportunity to help us both out. A little bit of spending cash on the side would be welcome. 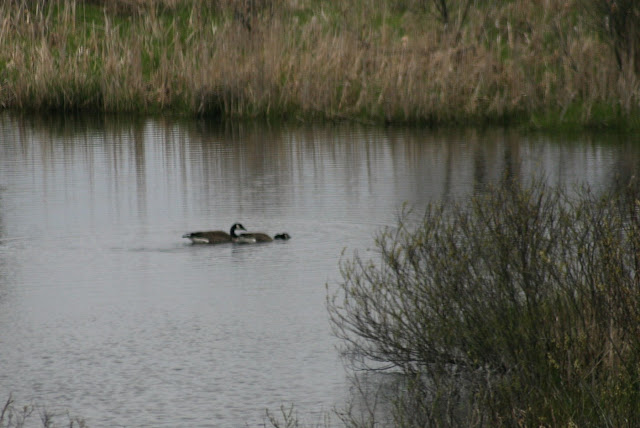 I mentioned more trial baking in the heading of my post so I set to work. Time for a cauliflower pizza crust. I gathered the ingredients together on the island, mainly to make sure I had what I needed to complete this recipe. With a large head of cauliflower as Dave’s blog suggests, I began cutting. Because I don’t have my food processor anymore.

(I sold it last summer) I had to do something different than all recipes advised. Hmm. A little bit of thinking was involved here and the recipe didn’t call for that.

First, I cut all stalks off and separated the flower heads. I chopped them on a cutting board to diminish their size even more. To soften, I did the microwave thing as recommended and tried them in the blender. It said in one of the recipes (George’s, I think) that it should resemble rice. Nope, the blender didn’t do anything, really but make a mess in there. One recipe said (Dave’s I think)1 large head of cauliflower where George’s said 2-4 cups. It worked out that I had about 5 ½ cups so I was likely doomed from the start.

Once cooled, I added the cheeses, spices and an egg. Dave said 2, George said 1. I’m getting a bit concerned but mixed everything with a wooden spoon and spread it out on parchment paper on a cookie sheet. It filled the whole thing and I was getting hopeful. Then came baking. In a convection oven, it is always different. Sometimes less time, sometimes more so I started with 20 minutes. It sure didn’t look like George’s picture at this stage, which looked the way it should.

Another ‘hmmm’. Perhaps I’ve just wasted a cauliflower and a whole big lot of time. After 20 minutes, I tried for another 10 minutes. Sure, it was browning up but this looks more like a ‘use a spoon’ pizza than ‘use a knife and fork’. It is kind of comical though and fun at the same time, trying to figure it out. It won’t be tonight’s supper anyway, so I’ll bake it once more before tomorrow night and maybe I’ll invite my good buddies to be guinea pigs with me. 😊
I talked to Bill a couple of times during the day and I was so relieved that everything went well at his stress test. Yay, flying colours! You know everything ‘should’ be fine but you still worry. He will have a quiet afternoon and evening so we decided he should go to Costco and pick up a couple of new work shirts. He had the time and they are good quality and good prices. It is nice to have variety, even if you’re a guy who thinks he has too many shirts!

At 4 I fed Clemson early. Not because he was bugging but because I was meeting Jamie at the Laundromat at 4:30. He gave me the walk through and I asked questions in relation to ‘if’ he was going to hire me. At this point, I had no idea, thinking maybe I would be a back up only. We went through the place, him showing me keys, dryer screens and problem machines. Before I left, he asked if I could go with him to the Home Hardware to meet Josh and get some keys cut. Before I left for the night, we shook hands, I had a part time job!

It will take me a while to get my schedule worked out but I can choose my own hours and use my own judgement as to what needs cleaning. I’ll keep track of when I’m there and what I do and at the end of the week, collect some cash. Works for me and it seems to work for him too. He will be retiring in 6 weeks from his full-time job but would like to pursue another part time job because of his young age.

I’m hoping this works out for both of us at least through the summer. Back home, I realized it was 6 and time for me to find something to eat. I didn’t feel hungry, but knew better than to skip the meal. I cooked some carrots from the freezer and fried up 2 pieces of peameal bacon. I didn’t feel like a salad so just had olives and tomatoes on the side. That did the trick. After I did the dishes, I sat and made up a schedule for cleaning. Jamie trusts what I tell him but I want it on record at least.

Bill was happy for me when I called him on my way home. It was something I thought I’d like to do and I pursued it. I’m pleased with the result and plan to do a good job. Clemson has spring itch, I think. He wants out all the time again.

I went for a walk down the lane earlier today to collect mail (all it was was a Canadian Tire flyer!) and tried to encourage little lazy bones to go with me. Fruitless. He sniffed around and wasted time. I was back at the bottom of the hill by the time he noticed.

With my chart done, I sat in my chair (to try and settle someone down) to finish my blog. He has been out 4 times in an hour, ask me if that is frustrating? The bonus of taking him out is that I’ve been able to see the beautiful sunset tonight. 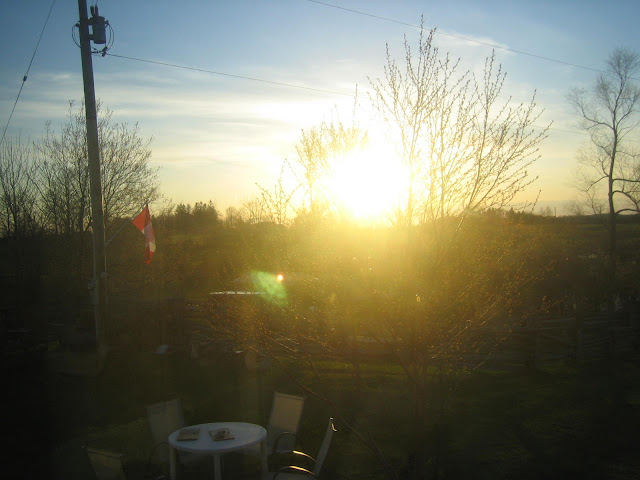 So, there were a couple of nice pictures to show for his persistence. This has been a great day! The only disappointing thing was my pizza crust. Maybe it will turn out in the long run. How was your day? 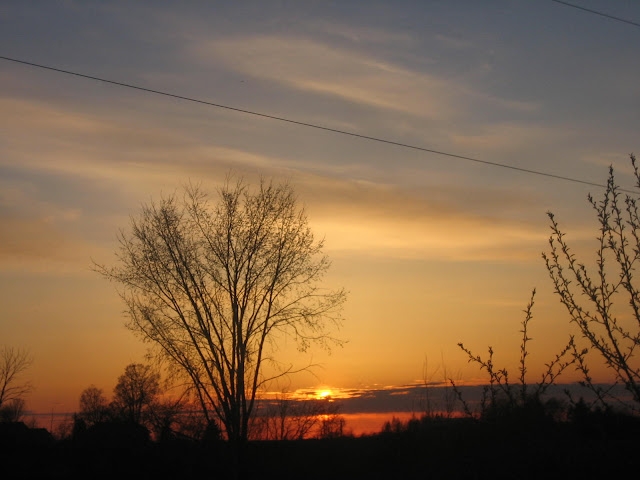 Thank you for stopping by! Your comments are important to me if you care to leave one.