On the Ridge
On Saturday, May 11th I woke around the same time as Bill did, around 6:15. He got up and I stretched and prepared myself to do the same. I could see frost out the window on the fence posts and rails. When I came downstairs to get my tea, we noticed that Ptooties had a new glistening sparkle, Jack Frost had found her too. The temperature was cold, 36F/3C and the wind was 1 mph so almost non-existent. Yay!


I layered starting with my socks, leggings and then the rest of my body. Today, is a special day for 3 reasons. Well, 4 if you count that we are still alive and kicking for one more day. 😊

First to my mind is Bridgette. My first born. My only daughter. Today, she is celebrating her 44th birthday. I never think of her as that age, she is and always will remain ‘My little girl’. I was 20 when she was born and to make it extra special is that she was a Mother’s Day gift this Mom will always hold dear.

Also, Bill’s youngest daughter, Jess, is celebrating a special birthday as well. She turns 30 today. #11 has been my favourite number for a very long time, no wonder!

My son was born on the 11th, our 10th grandson was born on the 11th. My apartment in London was 1111. Yup, a favourite # for sure. Jess is now a Mom and will enjoy the day tomorrow in ways she has never experienced before. Happy Birthday to both of our girls! Third on the list for today is the Walk for Alzheimer’s that I am taking part in.

The walk this morning is along the Grey-Sauble Conservation Authority Arboretum trail rather than at Kelso Beach, Owen Sound. It has been lovely there but with the cool temperatures we’ve experienced, being away from the waterfront will offer us more shelter and more amenities. I’m looking forward to it. It isn’t a long walk but a worthwhile one for the cause. I don’t usually eat before 8 am and I don’t usually eat toast but Bill and I both fueled up early today. I wanted something in my stomach.

Bill and I met Donna, our sister Cathy and my niece, Joanne, at Country Corner Café in Durham and he went his own way. She drove to pick Gayle up at Chatsworth on the way.

It was a wonderful crowd this year and according to Chris Doyle, the Coordinator, quite a few more teams than previous years. There are more than 1000 families in Grey and Bruce Counties using these facilities every year. We are all happy to be a part of that.

There is a great display of support in many forms. The sponsors are plentiful and when you walk up to the registration tent, volunteers accept your donations and pledges. You are granted a t-shirt and a neck buff so we all donned those under jackets or over hoodies as we joined the ‘sea of blue’ and made our way along the trail.

I mentioned earlier that it isn’t a long walk and so need to also state again that it isn’t about the distance of 2 km but instead about the disease. Once more, I want to thank all of my sponsors, some of you who read my blog, and others through other means. 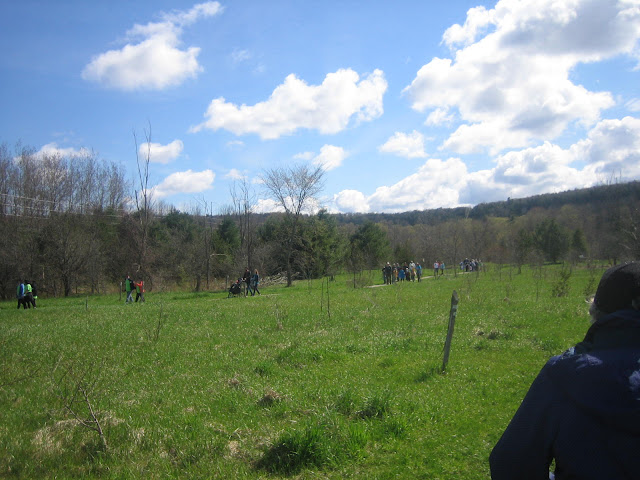 We finished in short time and helped ourselves to the delicious coffee, tangerines, cookies and also the wonderful Beef on a Bun cooked and provided by the Grey County Farmers Assoc. 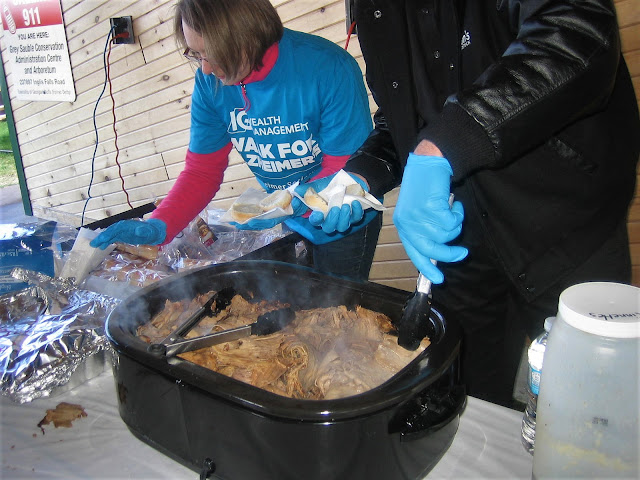 We sat and ate those while chatting about a variety of things. We all know how to chit chat! 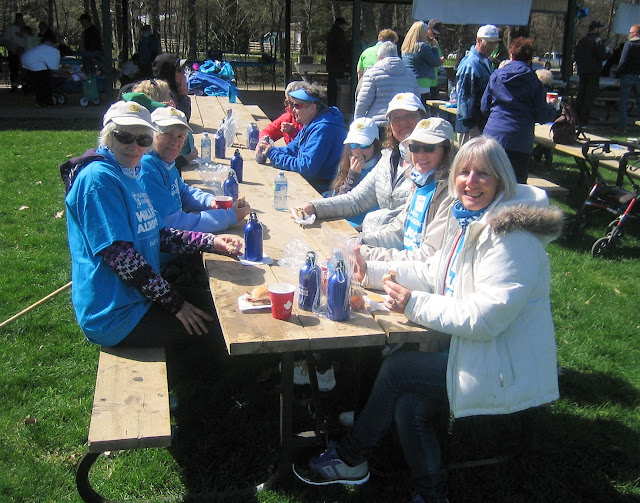 With the exception of my cutie pie niece, Morgan. She was quiet as she listened to her aunts fill air space. At one point, there were little bugs flying around our faces and this is how one of our team combats them. 😃

Soon, it was time to leave and we said goodbye to Wendy and Morgan, who live in O.S. Donna dropped Gayle off at home, then me in Durham where Bill came to pick me up. We had perfect weather!

By the time we arrived home at the Ridge at noon, it was 50f/9c and that is pretty darn nice. The clouds had moved in but no matter, it was warm. I heated up the last piece of quiche for Bill and fried him up a couple of pieces of pea meal bacon for his lunch. I didn't need anything else.

Nothing surprised (or excited) me more than finding a note on the door of the Suite. This could be what I was hoping for! I called Jamie back immediately and made plans to meet this evening. I’ll keep you informed. Bill wanted to get some grass cut so out he went and hopped on the rider. I caught up on my post and trying to keep a calm head about me, went out to see what I could get into. Bill was busy so I decided to start spreading mulch in the flower garden.
I’d forgotten how heavy these bags were! I almost gave up after the first one but the more I worked away, the easier it became. My back was speaking to me in hushed tones ‘are we done yet?’ but I ignored the mumblings and kept at it. If I didn’t finish it today, I’d have to go at it in a couple of days. So, I worked steady and by the time Bill finished cutting the berm and the front field, I was done. Literally, done. 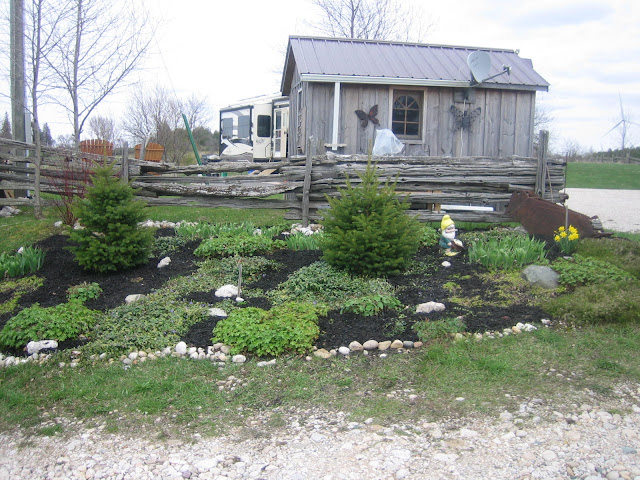 I walked down to the mail box with my camera. There would be no mail today but I’d forgotten to check for our weekly flyers yesterday. They would have come on Thursday. Bill told me about a cluster of turtles (what is a group of turtles called?) on our neighbour's overturned boat and I wanted to try and get a picture.

There were a few out on our side of the pond too and did their usual scatter when I approached. Pesky little things! I couldn’t get close enough for a clear view of the boat without getting my feet wet, so I walked around the fence into Don’s field. They still aren’t the best photos but you should be able to see how many there are. 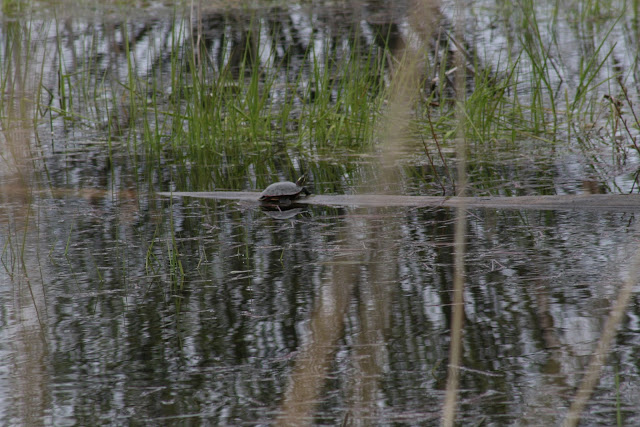 I sat outside for a while and rested. I was feeling mighty tired by now, having walked over a total of 4 miles already and it was only 3 o’clock. Getting up early didn’t help either, I suppose. I read the flyers, recycled the ones we’re not interested in and saved the ones Bill likes. It was soon time to retreat inside and get cleaned up. My fingernails and fingers were filthy! One of my gloves had a hole that I wasn’t aware of and you know what black mulch does. Yeuch!

Just after 4 pm, I went inside to chill out. The back of my neck was feeling wonky so I just needed to relax. I’m good at doing that! I started into a new book. It is written by Nora Roberts as J.D. Robb. Hmm, that’s different. I’ve read a lot of Nora’s books, quite a few years ago so now I’ll see what this one is like. It is called Memory in Death. I’ve also read other J.D. Robb books in the same themes so just not sure what the pseudonym means.

Bill came in around 5 and fed Clemson, who was sleeping beside me and before he got too comfortable, I suggested we start supper. Such a slave driver, I am! He lit the Weber Q and grilled us a burger each. Mine was in a lettuce bun, loaded, so I cut it with a knife and fork. It tasted just as good sans the normal bun and I skipped the carbs. I'd had enough bread already today. We did the dishes and just hung out until an expected phone call/text came. We were having visitors later.

The rest of the evening flew by and the rest of the story will be relayed perhaps tomorrow, if there is anything to tell. I wanted to get this post published before they arrived. This has been a good day. We both got some things accomplished, I had a great walk with my sisters and nieces for a great cause. Tomorrow is Mother’s Day so I’ll be going to visit Mom, of course. I hope you’ve had a wonderful day too. The weather was certainly in our favour! 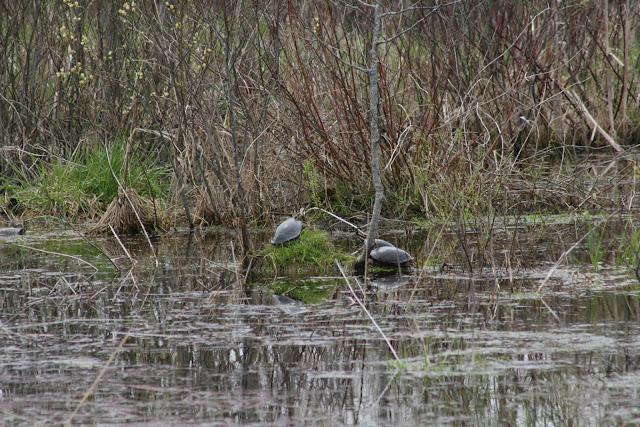 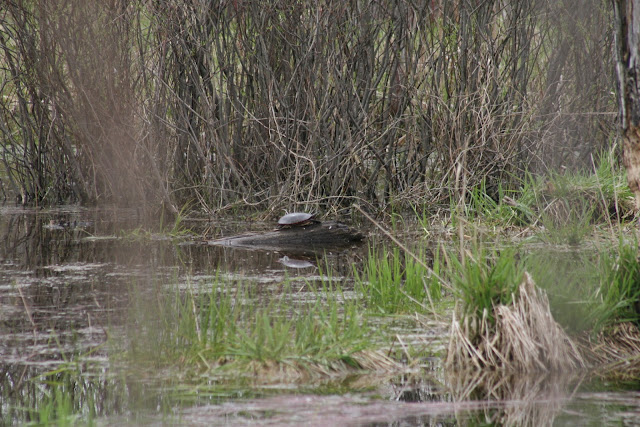 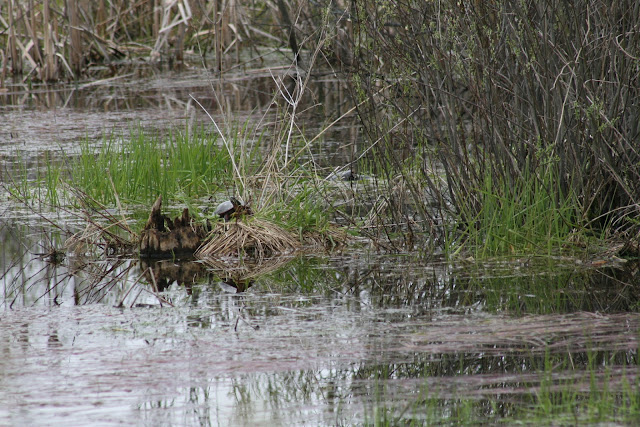 Thank you for stopping by to see what the Ridge people are up to today.

Posted by Patsy Irene (Chillin' with Patsy) at 5:13 PM