Home on the Ridge
Clemson slept through the night like a good little boy. I did too. 😊 Not sure when I first woke up but I got up around 7 and was grateful for the opportunity to sleep as long as I wanted. Bill was downstairs but I don’t think he was up long. Today is Saturday, May 18th, the beginning of the long weekend. As a working citizen, we looked forward to this weekend as the first of the year where camping began.

The temperature this morning was 42F/5C when I woke up. Winds were moderate and although the sun didn’t rise for us and the clouds ruled, it wasn’t raining. That meant my sheets should dry soon enough. We had our morning brew together before Bill hopped in the truck and drove over to the Acreage to pick up Donna’s roto tiller. It was time to get my garden ready! Once he had it here, we found a couple more things that we wanted to till as well.

I made omelettes for breakfast around 9:30 and Bill had his in a toasted sandwich and I had mine plain. After dishes, out he went and worked around the property. I got cleaned up and drove into Durham to the post office for stamps, to Home Hardware to look for bird seed and then FS where I actually got what I wanted.

I stopped at McGowan Falls for my first peek and took some pictures before going across the street to a garage sale. Nothing there that I wanted but with a lot of antique gardening displays, I'm glad I stopped. 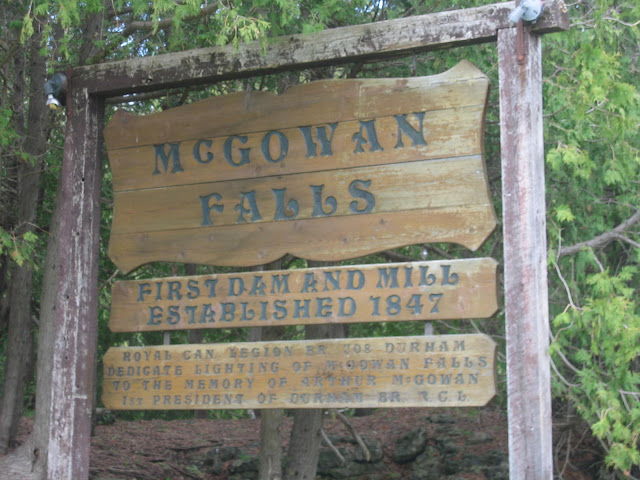 I had suggested tilling the area around the firepit so I could make it nicer and not have to pull grass out around it as often. I didn’t quite have a plan but it came together after lunch after he tilled it for me.

Bill then sprayed the corral hill, the bane of our existence when cutting grass. The section that I spent hours raking. We are determined to kill this grass and either plant ground cover or just let it moss over. After doing that, he gathered rocks from the fence line surrounding the field and then moved our cut wood from one pile to another up along the fence.

Eventually, I made my way outside and started raking the fire pit. I layered up and soon went the opposite way. It wasn’t hot, rather it was a nice day to work outside. I raked the stones and grass out first, then separated them. The grass went over the hill and the stones I piled together. Instead of just placing the firepit back and waiting for grass to grow again, I laid some landscape fabric on the area, making it larger than the original pit. Hmmm, now what?

I decided to replace the stones on top, arrange the bricks for the pit to sit on and fill in with some of our own gravel from around the patio mat. It is a nice small stone/sand mix. I felt pretty good, taking breaks when I needed to and by the time I finished, I was quite pleased with what I’d accomplished. I placed the pit back on and with some adjustment, levelled a brick so it sat evenly. Bill wasn’t understanding my method, I do things ‘rinky-dink’ sometimes but it worked out in the end.

When we both finished, Bill drove over to the Acreage to get water. The gate was open indicating that Mike was out at his trailer. That saved us having to stop and we drove right in. The black flies were crazy! I got out briefly but soon hopped back in the truck, where I remained until the bladder was full. Bill was in and out as well, rather than getting eaten alive! That’s the problem with so many cedar trees. We were happy to return to the Ridge with the wide openness up here.

Bill fed Clemson and because we’d both worked hard today, we agreed on toasted bacon, cheese and tomato sandwiches. Yum. The wind picked up and ranged between 6 and 15 mph during the later afternoon.

We didn’t get over 60f/16C today but it was a pretty nice day for what we did. At a few minutes after 5, I was hungry and ready for supper. We’d had a sugar-free soda earlier with some cheddar cheese so needed something a little heavier. 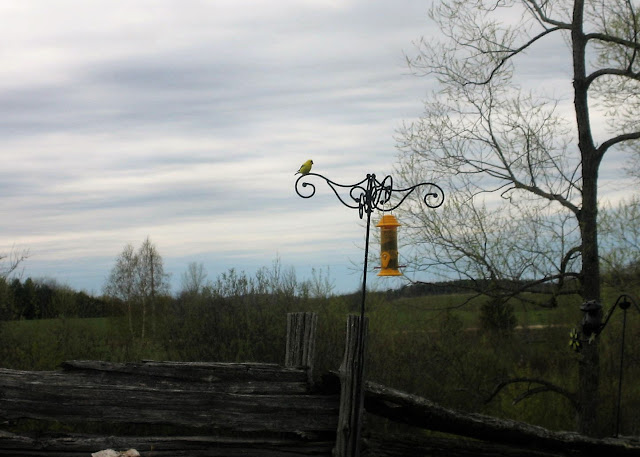 I cooked the bacon in the microwave, toasted the seeded bread while Bill sliced cheese and tomatoes. We were eating and cleaned up by 6:15 and I was able to focus on posting my blog early tonight. 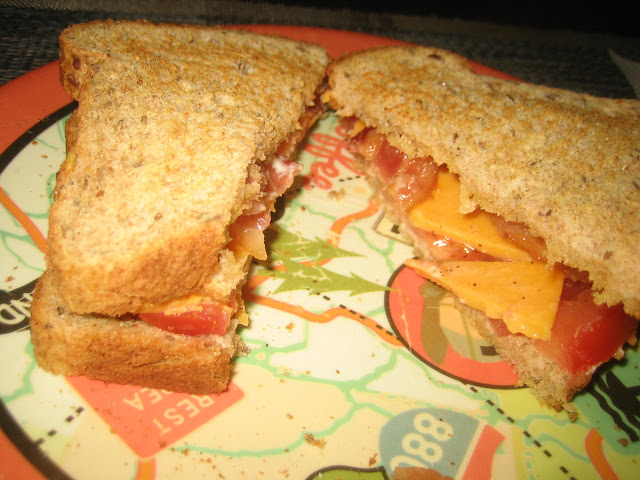 There were a lot of our programs on our PVR to watch in the next few nights. This was a great day and we both feel exhausted so I’m not sure how much tv we’ll see and who’ll crash first. I hope you’ve enjoyed your Saturday too!

Posted by Patsy Irene (Chillin' with Patsy) at 5:23 PM