Sunshine Covers the Land, Winds Vamp Up, Work and Play

Home on the Ridge
On Wednesday, May 8th I woke up feeling quite chilly. Well, not under the covers but when I stuck my hand out it was very cool air. We are comfortable with an overnight sleeping temperature of 62F, as a rule, not being cold sleepers like some of you. When I went to bed last night, I turned the Ultraviolet heater to ‘2’ and thought that would keep the temperature moderated for that 60 – 64F area.

We both slept through, although mine again restless with Clemson shifting under the covers a few times (is he getting up? Nope), and I woke around 6:30 and got up to turn some heat up. It was only 58F/14C inside and 37F/2.7C outside. The winds were up though which would make it feel cooler still. We can’t seem to have one without the other some days. It sure is great to see a clear blue sky and the sun will warm things up by this afternoon.

I made my tea and read blogs. Clemson slept until 8:30 and by then, I was too far into my book to go for a walk. Later, perhaps. I’ve been doing well at 4 miles/day so don’t want to slide now. When Bill is working, he easily does 6 miles without any effort at all. That is all to his benefit and with the keto lifestyle, it is showing in his weight loss. I’m so proud of him. My back feels much better today so I’m hopeful for some outdoor stuff later.

I finished my book and the temperature in here has increased to 69F so I unplugged from power and turned the inverter on. We received our hydro bill the other day from Donna and we were both very pleased with our new electric heater. It is definitely cheaper than propane. I made a coffee at 10 and then got washed up. I chatted with Pat (and Rob got his 2¢in, haha) about Mom, Aunt Mary and then about keto and meal ideas.

I’m not feeling hungry yet so sat and made up a chart for Bill. He wants to keep track of water and propane fills. It is a pretty basic chart and one he can keep beside him at the table. I went outside with Clemson at 11:55, realizing that I had a letter to mail for one of Mom’s insurance policies and the mail gets picked up shortly after 12 noon. Clemson decided to wait for me on the patio mat, lazy bum, so I went down myself. By the time I returned, he gave me a look as if “why didn’t you wait for me?”

Good thing I moved when I did as no sooner did we get inside the Suite again but the mail lady had just stopped to retrieve the letter. It was 12:05. Phew! Inside, I got a notice that Mom’s pharmacy bill was also due so I took care of that. How wonderful it is to have online banking! How did we ever manage paying bills before? I appreciate it even more being Mom’s power of attorney since she banks at a different bank than we do and some dealings would mean driving to Hanover or Owen Sound.

I made a phone call to Mom’s financial advisor to book an appointment so we can discuss investments and how best to handle a sizeable inheritance she received. I had to leave a message so will wait to hear back from Shannon for that. With the business taken care of AND the realization that the strong 10 – 18 mph winds were c-c-c-cold, I was in no hurry to go out and do some work.

First, I needed to eat anyway. I warmed up a nice piece of quiche and had some olives for additional fat consumption. Since I wasn’t hungry in the first place, that’ll fill me for the day. Bill reminded me this morning that we forgot to include a second sandwich for his lunch today so I felt bad about that. They have a food truck come in to Can-Am so at least he can buy something there. I’m going to blame the bread situation here since we only had 2 slices left, enough for one sandwich!

So, by 2ish I was ready to go out. When I’m going to work in the yard, I don’t want to be bogged down with too many clothes so I just layered a couple of hoodies, put on runners and work gloves. I managed to finish raking the corral and pick up the twigs and then the lane under the same tree. So many little branches fell this winter and made a mess! I took care of those two areas in about an hour and then decided to do something more enjoyable. Although, I don’t mind yard work generally.

I got out my paints, tablecloth and two big rocks that I wanted to paint. There are a few things and rocks around the property that I want to add a personal touch to. The wind was still strong but it wasn’t getting the better of me. I used wood and my paint kits to hold the tablecloth in place and just set to work. The sun was so warm that soon I wasn’t noticing the cool wind. When I finished those two, I gave them a clear coat finish. I like them!

It was only about 4 pm and I really didn’t want to go inside yet.  I didn’t have my book outside so just sat and relaxed against the Suite where the wind wasn’t as bad but still there. It was coming from the northeast today. After a while, I decided to start burning some of the old wood pile so we could make room to bring the newer stuff up. We’d cut it up last summer and stacked it down by the Hangar. Before the Hangar was erected.

I didn’t know how the fire would work out but because it is screened in, with one of my fire starters, it began instantly. Yay! I kept it going without any difficulty at all and moved the King chairs around to the east side of the pit out of the direction of the smoke. It was quite toasty and I just kept loading wood in on top of the bigger log to keep it ‘cooking’. I texted back and forth with Pat and talked with Bill at one point.
He was going to have a very late day after all. ☹

We were both hoping that he’d finish both trailer orientations at a decent time, like 5 ish, but that isn’t the case. Not much he can do but stick around until he finishes with the clients and see what time it is. He won’t have eaten either so will need to take care of that on his way home. I’ve asked him to use his judgement about coming home at all tonight. If it is late and he’s tired, I’d rather he stay one more night and take off early in the morning. We’ll see.

Inside at 5, Clemson got fed and then when the air cooled even more at 5:30, I let the fire begin its die-down and closed up the bunky. It was time to start my own supper. Tonight, is Hamburger Stew in Madame IP. She’s excited, having been tucked away in the cupboard for a week. 😊


I heated the pot, sautéed onions and ground beef. Next, I added the list of tasty ingredients before placing the trivet on top and ignoring the carb/keto deal tonight, I put Instant Rice in the pot on top of the stew. Set it for 25 minutes because of the potatoes and walked away.

I caught up on my post while it cooked and Madame IP indicated completion at 10 to 7. I let it Natural Release for about 10 minutes before digging in.  Just before 7:30 I got the call that Bill was on his way home. I’m relieved and can figure out his arrival time. That’s all I need; he’ll be here before bedtime. I dished up my bowl of stew and added some rice to it. I’ve avoided carbs like the plague for the last couple of weeks, at least for the most part, so wasn’t too concerned about a tablespoon of rice.

It was delicious! I’d added sweet potatoes/yams instead of regular potatoes simply because I had some to use up. That added to the flavor and we have enough leftover for a couple of these rainy nights that are on the horizon. Yup, the clouds have moved in so we’ll get some rain, finally! I’m being sarcastic. More rain, just what we all need. Rumour has it in the Farmer’s Almanac (?) that May is going to just like this. Up and down, rain and more rain. 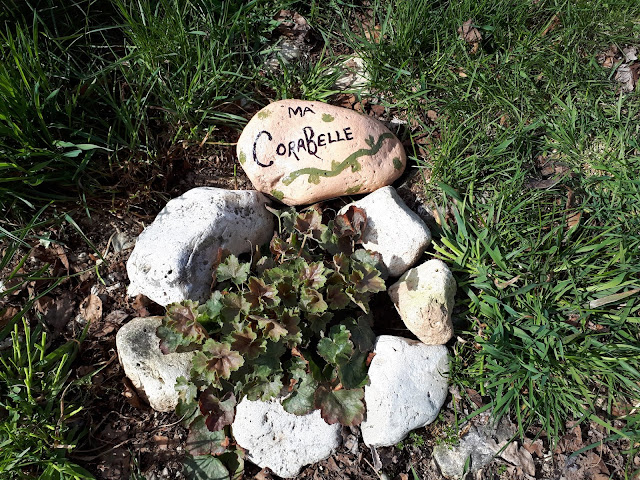 I cleaned up dishes and finished my post. The highest we reached today was 12C/55/F so not a bad day at all. This was a fun day for me. I did exactly what I wanted, when I wanted and some of it was work and some was play. Just the way I like a day to be. The turtles were out and I was able to sneak up on a bunch, even if the picture isn’t my best. The drakes were loud most of the day for some reason, in the pond and the frogs took longer to start singing. I hope you’ve enjoyed your day.