Windy Drive to London, Doctor, Doctor, A Tearful Goodbye to My Friend

The battering winds woke us up on Wednesday, May 1st around 5 and I went back to sleep eventually praying for some calm before 6:30 when I’d planned on getting up. No such luck. Bill got up first and turned the furnace on for a quick burst of heat in the bathroom and turned the small heaters up to generate an even heat.  I hopped in the shower right away and then Bill followed when I came down for my tea.

The little heaters will remain on until we leave but the furnace got turned off when we were done in the bathroom. At 7:30 no way was I hungry, and I do believe after a discussion with my sisters on Saturday, that the cream and coconut oil in my tea each morning keeps my hunger at bay longer than Bill’s w/o the fat of the oil. I was wondering why he was hungry sooner and I could often go until 11 or later. This morning he had toast and a yogourt and I had some Jell-o.

Once cleaned up, we had a discussion as we watched the sky get darker still and the rain even heavier. We were planning on taking both vehicles. Bill has a doctor’s appointment at 12 noon to chat about the results from his blood work. That never pleases us as it is never good news. His weight is down though quite a bit since last fall so he is anxious for the doc to see that.

We have the visitation for Mark at 2 so the timing worked out well. Any other day this week and it wouldn’t have worked for us to attend. It will be hard, very hard for me but I want/need/have to be there. I was going to follow Bill in Ptooties and after the visitation, return with Clemson on our own. He works tomorrow and Friday.

With the weather, we decided that it makes no difference in fuel usage if we both drive together in Ptooties, there and back today and Bill head out in the morning. I feel better because it also means that we’ll have our sweetie for one more night. At 8:45 Ellen and Scott popped over to say goodbye and thank us for the stay. It was great to see them before they head out for their new adventure. P.E.I. wow! Now we will have a place to stay when we make a trip out east! 😊

We were on our way at 9. The drive to the big city was uneventful, which is always good when you are travelling for2 ½ hours. Clemson was restless in the back seat, for some reason couldn’t settle down but he was quiet at least as he roamed back and forth. In his seat belt he can only move so far so his safety was guaranteed.

We arrived at the west corner of London, close to the doc’s office but we were too early. A good time to make a pit stop and then we went to The Shoe Company store, which we’d never been to before.

Bill was happy that he found a pair of good shoes that he can wear to work since his other black leather ones are looking pretty rugged. He likes to look neat and tidy and he needed slip ons for going in and out of rvs with a client. The prices were high enough but as long as he is happy. Then we drove to our Dr.’s office with a bit of trepidation in hearing what he had to say.
While waiting the few minutes to see him, we both weighed ourselves on their reliable old-fashioned scales and were quite pleased with the results. Especially Bill’s. The results from his bloodwork also was favourable and we are all very pleased. This was just a routine follow-up that the doctor has to do when monitoring something specific. We left with (as my sister says) a gold star and encouragement to keep doing what we’re doing. And that is to protect Bill’s natural insulin count!


The second order of the day was the toughest. We went to McFarlane and Roberts Funeral Home in Lambeth for 2 o’clock and it was a packed place. Mark was a great guy and Leah, his wife, worked in the city council offices for many years. I wouldn’t recognize too many of them but we did say hello to Bud Polhill, a familiar face on television news. I lost it to tears a couple of times, some things I can’t hide, and I give so much praise to the strength shown by Leah, Brittany and Matthew as they greeted everyone.
Now bear with me while I record some pictures
for my own memory and collections please


We saw a few former co-workers, which was nice, but was blessed when Leah told Bill and I that while Mark was sick in his short month and a half, since learning of his state of health, he had our names on his list of people to call to see when he was better. It broke my heart, but she wanted us to know that he thought of us often. I will treasure that as I move forward through this grief that still smacks me in the face since I heard the news.

After leaving the home, we decided to go to Costco instead of Bill having to stop after work this week and I’m glad we did. It gave me the opportunity to pick up a couple of things that he wouldn’t have thought of and we didn’t have on the list. With that done, we headed home in the rain. 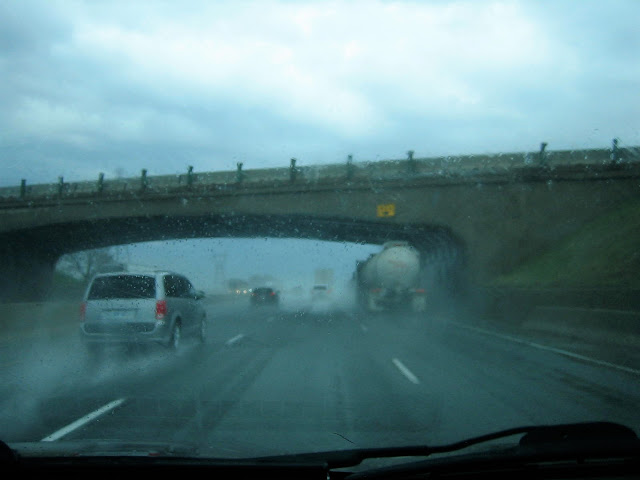 It was a good dry day until that point when we walked out of Costco so it looked like a nasty drive home. It wasn’t too bad but driving the first stretch of about 40 minutes on the 401 is always worse with traffic.

It was tiring following behind a dump truck as we approached Stratford so after finding out Jess was home; we made a quick stop for a visit and to see Easton before continuing on the last stretch. Easton wasn’t up for company; I think we disturbed his sleep but it was nice to see them both briefly and to hold that little bundle once more. Our baby fix for the week. It was 5:30 when we pulled up onto the Ridge after a long but good day.

With everything unloaded and food put away, Clemson got fed and I was grateful that we had enough leftover roast beef to put together another meal for us. It just meant heating things up in the microwave and we were eating soon after. I was starved. We did manage to have lunch at Wendy’s before the visitation and I forced myself to have a chicken Caesar salad and a diet Gingerale instead of a juicy burger. It wasn’t too bad but their dressing leaves a bit to be desired.

Supper was good and we even topped it off a bit later with some ice cream. We hadn’t had any for a while and it was yummy. Chapman’s Black Cherry, need I say more? We watched 3 of our hour-long recorded programs and half way through The Enemy Within I was sleeping so went up to bed with Clemson.

Exhaustion was in control and I don’t fight it when that happens. All in all, it was a great day and things turned out really well. I was grateful that Bill and I drove together and that we crawled in bed together. 😁

Thank you for your visit and any comments you wish to leave for me.

Posted by Patsy Irene (Chillin' with Patsy) at 7:53 AM