The Ridge
On Friday, May 17th, I woke around 4:30 when Clemson moved to go out for a piddle. Hmm, Daddy is home. Well, it wasn’t 2 am at least. We went back to sleep, all of us, and it was 7 when I got up, half hour after Bill. He was downstairs with his coffee at the table catching up on some banking from the last couple of days.

My back was aching again and that was frustrating me. I’m kicking myself for that 3 hours of raking on the hill, 3 weeks ago! It comes and goes. It wasn’t raining outside but I didn’t feel like getting out for a walk anyway. I took some Advil and sat with my tea. Sometimes, I wonder if it is from our mattress or my recliner. I was in that chair for a fair bit yesterday and that may have aggravated it. Only myself to blame there.

I had an appointment at the Bank of Montreal for 9:30 in Owen Sound so Bill and I had to move a bit quicker than usual this morning . I started frying up some peameal bacon and warming us a piece of quiche each. We ate but didn’t have time to clean up the dishes before heading out at 8:30. Clemson was still in bed and when I brought him downstairs to go out, he wanted no part of it and went back upstairs.

It was foggy and cloudy this morning and as we turned onto the county road off Baptist Church Road, Bill watched the road while I watched for deer. This is the type of morning that they’ll be prancing across the road in front of you. I saw one but it was in the field near the forest edge. I love these roads, curvy and hilly but we both agreed ‘not in winter’ and ‘not with the Suite’. We arrived at the new location for the BoM on 16th Street E with time to spare.

While waiting for the bank to open, Bill finally made contact by phone with his friend in N.C. about the shipment of the last pieces for his Telemaster. Now that he knows more about when to expect it, he can relax. We met with the pretty Shannon and it was a pleasure to walk in and have someone on the ball with why we were there. She knew exactly what we wanted to do and while chatting about our winter trip, the progress on their property and Mom, she completed the task.


It is always welcome when we have a reason to go to Owen Sound, ‘the big city’, so we can visit some stores in the east end. Stores that we don’t have in Hanover or Durham. Bill went into Home Depot and I went into Dollarama – yes, Hanover has dollar stores but no H.D. We found what we were looking for and was thrilled to get some Ramekin dishes at $2 for three! Now, more custard!

On the drive back home, the fog had lifted but clouds and dampness persisted even though it wasn’t raining. The winds were up again keeping the day cool. With a high of 13C/55F the sun made an appearance around noon. Bill worked in the Hangar and I hung inside with Clemson until 1 when I went out to check on his progress. I had changed into working gear and got my knick knacks out for the garden and bunky.

Bill finished up and before coming inside he hopped on the riding mower to cut the back field. After putting stuff out and getting the bins tucked away, I went around and weeded the upper garden on the berm. Stupid grass grows where you don’t want it but not where you do! He finished around 3:30 and moved inside. I sat out for a bit after walking to the mailbox but the wind was coming from the north and was very cool on my back and neck. Soon enough, I was indoors too.

For supper, Bill grilled our Italian sausages on the Weber. They have just enough hot spice to make them interesting but not an amount to stop us from eating them. I put together a salad on the side and that was quite enough to fill us. We cleaned dishes up and we drove into Durham to clean the laundromat tonight. I was going to wait until the morning and Bill was going to join me just to ‘learn’ the ropes. It is nice to have a backup if I can’t get in there and if he is home.

There was one man waiting for 3 dryers to finish and a lady with 2 children came in to fill 3 or 4 washers while we were there. We emptied the dryer lint first, they need a key to pull out the 24” x 18” slide out trays. Once they were done, Bill started sweeping floors while I wiped the washers that weren’t being used. Bill moved on to mopping the floors as I finished. Once I was done cleaning the windows in both front and back doors, we locked up and left.

We were finished in an hour so there is no way I could do all that by myself in that amount of time. I’m glad we did this tonight so we don’t have to get up early in the morning. Bill was able to get my new key to work in the back door so any time that I want to go in and override the usual ‘Open’ time, I can do that. It is much nicer without customers to work around. Tonight was a bit of a challenge so I’m glad I had help. We had also taken our bedding in to get it washed so Bill loaded that in the car while I filled out my chart and locked up.

Bill had run out of gas for the rider this afternoon so we filled Ptooties up along with the 5-gal gas can before heading home. The wind has died nicely but it feels quite cool outside.
Back on the mower, he finished cutting and I hung the sheets on the line so they can dry tomorrow. Clean sheets are already on the bed. I’ll sleep good tonight! We were both done for the day before 9 and as I figured, my back has been really good for most of the day.
It was a quiet evening and we treated ourselves to some Creamy Jell-o for dessert. This was a nice day. 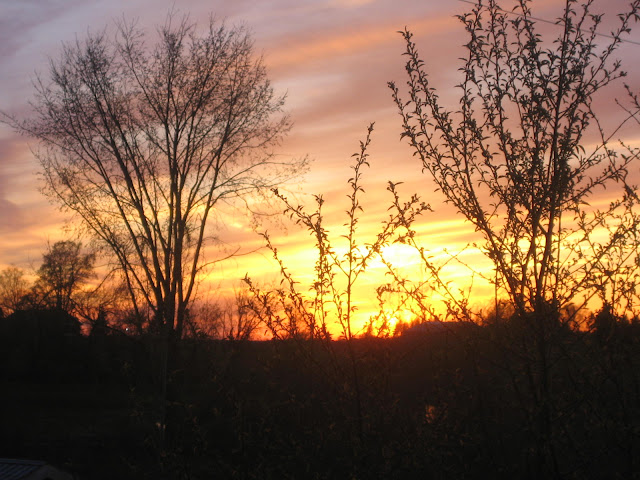 Thank you for your visit. I love to hear from you if you wish to leave a comment.

Posted by Patsy Irene (Chillin' with Patsy) at 5:48 AM