The Ridge
I had my alarm set for 6 on Friday, May 24th and typically so, woke up about 30 minutes earlier. That’s okay. If I don’t set it, sure enough I’d sleep in. It is really REALLY nice that I’m not on anyone’s work schedule but my own. It wouldn’t matter if I slept in and didn’t get to my job until 10. I’m on my own clock and that was something that was an important element in me working again.

Bill was still sleeping, after he and Clemson were up at 4 for a piddle. I tiptoed out after getting dressed and washed. My plan was to slip out around 6:15 and get done cleaning early. Daddy’s ‘black’ fog jiggled that Jello. It was thick as pea soup so I bided my time reading blogs from yesterday. Bill came down soon after and made his coffee. He’s the one who should be sleeping in after a full work day and long drive yesterday!

The air is calm out there, not a titch of a breeze this morning as is evident in our flag. By 6:40 the fog wasn’t much better but Bill said to take my time and I would be fine once I reached the highway. I put the fog lights on (or so I thought!) and headed into town. The place was quiet the whole time I was there so I was able to zip through without any slowdowns. Next time, I might try and do the front big windows, they are pretty dirty. There was one washer that had a note in the door so I took a picture to text it to Jamie.

Back home, I made my tea and sat and relaxed until I cooled down. Even with a fan running in the Mat and the door propped, it is warm in there when you are cleaning steady. Bill was on his rider in the front field as the grass is growing like crazy. Clemson just got up again around 9 so when I took him out, I pulled my battery mower out of the shed. I need to cut my area of grass today too. I'm hoping to get it all cut today.

At 9:30, I made breakfast as I saw Bill coming up the lane. Bacon and eggs on toast for him and a zucchini bagel with mine. These are pretty good! Not crunchy like a bagel even after toasting it but I’ll try toasting the next one longer. I had a call from Jamie and we discussed the washer and the client who seems to be making a habit of this same complaint. After dishes, we went out to get to work. Well, first I swept the floors inside, they needed it badly. Then I joined Bill.

Bill hopped on the rider again and did around our parking area, up on the berm and in the corral. There are some places he can’t get to up on the berm that need to be whipper-snipped or done with my mower – or both, actually. I put the battery in the mower and thankfully, it was fully charged from the last time Bill charged it. We carry it south with us so it doesn’t lose its charge completely. We were both covered from head to toe in clothing and our hats. A necessary evil with the black flies. They were on our screened faces, on our dark clothing and never relented.

I was exhausted by the time I finished and extremely hot (and bothered by the persistent flies). Being fully clothed and exerting the energy required to cut grass (walking) is not a comfortable feeling. When I put the mower away, I retreated to the Bunky to do a certain amount of disrobing. The gloves, screened tilly style hat, the windbreaker and shoes. It was nice and cool in there so I laid down on the futon until my body cooled considerably.

Back inside the Suite, I hopped in the shower and enjoyed both cool water and then hot. As I was finishing Bill came in and had his. We had 20 minutes or so to be ready for Clemson’s vet appointment in town. We arrived on time and then had to wait about 20 minutes before we were called in. I recognized the doctor as I’d just seen him at Rockwood, on their weekly Pet Day. He’d brought a beautiful collie in to see the residents, Mom and I included.

Clemson went through the regular checkup, weight, temperature, heart and liver checks. All checking out as very good. His ears were clear, his eyes clouded and his teeth deteriorating in the manner we already were aware of. Then came the tough part. Drawing the vet’s attention to the two lumps on Clemson’s underbelly and front leg. One was soft which turned out to be just fatty tissue. Bill and I saw it through a microscope and that was interesting.

The second one was double in size from last summer and it had formed a hard core. This sample was harder to retrieve and our little boy didn’t like it at all. We all agreed to have this one sent away to Guelph for a determination. The last thing we drew his attention to was a small pea size mass. Just a poke with a sterile needle burst the ‘bubble’ and it disappeared – for now. Just a cyst. So, a couple of things cleared up and the third we’ll hear about next week.

We left a sizable donation which also included his heart worm and flea medication to begin June 1st for the next 6 months. Back home, Bill and I felt worn out and Clemson never refuses a snooze with the family. I went up to bed with the little guy and Bill soon followed. We were obviously in need of a sleep as it was an hour and a half later when we got up. Time for a tea and some cheddar. Clemson didn’t get up until a few minutes after his supper hour of 5 o’clock. Today's ordeal tired him out too.

We sat and read some. Yes, it would be nice to be outside but I didn’t want to cover up on such a warm day. That would be necessary with the black flies that are temporarily invading our space. So, we stayed inside and were quite fine with that. Just after 6, I warmed up the beef stew I made yesterday and we had a quick and easy supper together. For dessert, we had a dish of yummy custard. Gosh, I love that stuff! 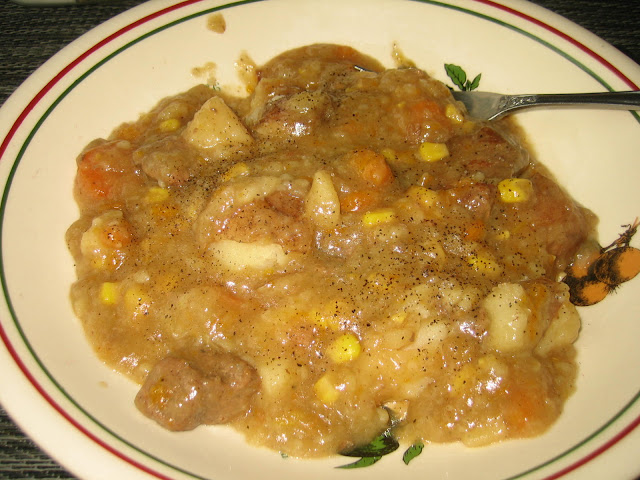 With dishes done, the sun was brilliant out there where all day it was playing tag with the clouds. At least we had no rain and we had beautiful temperatures in the mid 60F/18C range. This is great for the veggies I’ve planted. It was a quiet evening with some tv and more reading. My book is very good. 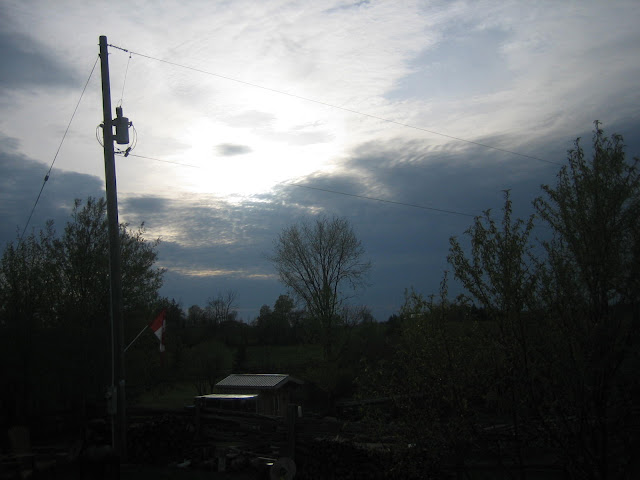 I hope you have enjoyed this warm day in your neighbourhood too.