The Ridge
It was just before 7 when I got up on Sunday, May 19th. It was a mild morning with our weather station reading 56F/14C. I wasted no time. The sun was out, the sky was blue and there wasn’t any wind. I slipped my puffy vest on over a single lightweight hoody and by the time I got to the end of the lane, took the vest off and left it on the gate post. Sometimes 56F isn’t that warm but it was today! Yay!

My back was nasty this morning so I took a walking stick. I didn’t want to give up and turn around. It wasn’t the most comfortable walk but I persisted, twisting and stretching as I walked, and enjoyed every minute, every step of the 2 miles before reaching home again.

I had my tea outside when I returned and it was so nice in the King chairs, listening to and watching the birds at my feeder.

Two male goldfinches and 1 female mostly and the red-winged blackbird that keeps trying to eat their food. Comical watching his yoga moves as he sticks his beak in the small hole. Oh well, he is hungry too and I haven’t put any seed out for the bigger birds yet. I’d taken 3 regular strength Advils with my tea and it seemed to be helping. 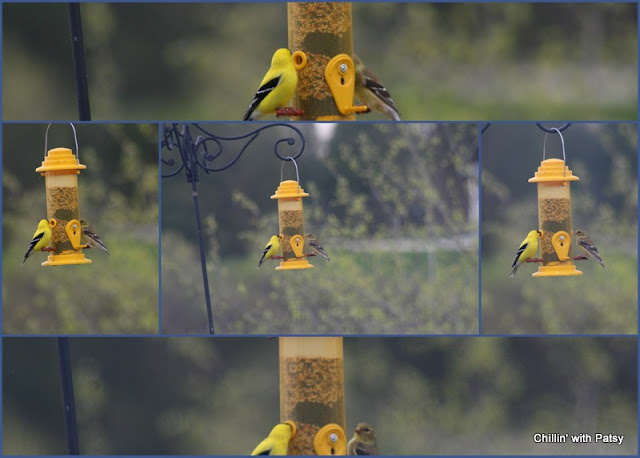 While I was  being so leisurely, I can’t even recall what Bill got into without stopping to think about it. Oh yes! Now I remember but I saw him taking pictures so hopefully a blog post soon! I keep saying that and in time, my busy guy will do one.

It was shower day for both Bill and I and rather than saving water (teehee) we opted for taking turns today. He was done working outside and so got cleaned up to work on his Stinson Reliant. I think it is almost done, just needed warm weather to paint.

We had bacon and eggs for breakfast and cleaned up the evidence before going about our day. While he went out to the Hangar, I swept the floor and got everything looking spiffy inside again. It seems that I got cleaned up to get dirty again. I hate, as anyone does, to be ‘out of commission’ so regardless of what it might mean tomorrow, I went to work in my vegetable garden. Bill had removed most of the big rocks from tilling so I put knee pads on and took my seed packets of onions, radishes and sunflowers up the hill. With gloves and a hand rake and trowel, I removed even more rocks and planted.

I planted a couple of sunflowers in each corner of the garden and 1 packet of radishes and 1 of green onions in the rows furthest east. I’ll wait the 10 days and plant a second packet of the little red veggie. That should supply me for the summer. I didn’t get my multiplier onions in yet, but hopefully tomorrow. With that done for now, I was feeling pretty good so moved down to the new flower garden area that I’d asked Bill to till for me. There was a lot of grass and grass roots to pick up and remove as well as large and small stones. I was excited, this was a good spot – I hope.

When I finished that, I knew that I’d done enough for the day. It was only 2 when I grabbed a bottle of water from the bunky and my book from inside the Suite. I put the cushion I bought for my lounge chair on the King chair to make it easier on the butt and settled in.

While in the bunky, I covered the futon with a nice comforter we’d had on our queen bed in our sticks and bricks home. Hard to purge some things if they were useful. It looks nice there. I forgot to get a picture today.

The wind increased and the temperature did as well. Humidity was running rampant but we’re not complaining at all. This is what we’ve been waiting for! I know it isn’t going to last, dropping ridiculously tomorrow again, but we’ll take it when we can. I read quite a few chapters of James Patterson's The Haunted until the wind was becoming too strong, sitting with my back to it. I could see a very black cloud moving in from the southwest so closed up the bunky, told Bill I was moving inside and made myself a tea.

I had to close the windows on the south side as the rain was spattering in on the entertainment centre. The rain got wild for a bit and then it stopped and things calmed down. The black cloud has moved off the to the east – for now. There are warnings out for the next hour or so and we’ll be watchful. Bill moved inside around 3, also done for the day. It will be tomorrow before we pop over to the Acreage to see Donna and Gerry, they didn’t arrive until around 3. 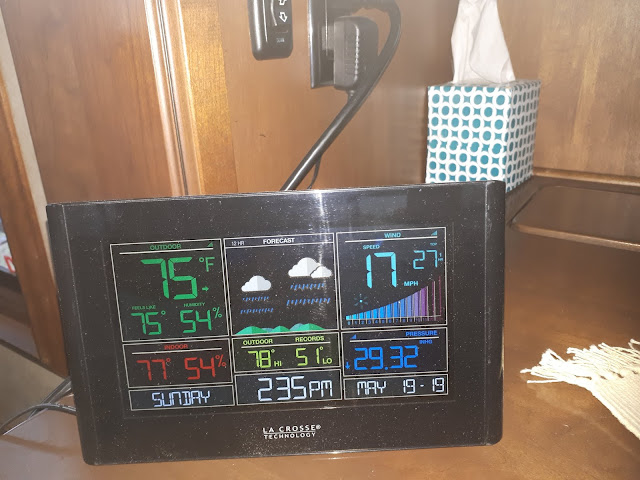 The rest of the day showed us a mixed bag of weather. We’ve had heat, humidity, rain, sun, clouds, wind and by 6 pm we even had thunderstorms. Moments when we couldn’t see the laneway from so much rain to moments of beautiful wet clarity of how green things are. Clemson isn’t afraid of storms at all, bless his little heart, and when I moved out of my chair at 5:30 to start supper he just stretched out across the blanket.
We settled in when the rain started to watch some more of our prerecorded programs. At least we can do that if the satellite signal is lost. The storms could continue until 8 pm at least.

For supper tonight, we had two plans. Burgers on the Weber (if it wasn’t raining or storming) or chicken thighs which I’d thawed during the day (if it was doing either of the above). Decision made at 5 pm. Chicken it is! I don’t mind, I’m hungry. 😊

So, I sautéed the large thighs in oil in Madame IP, trying to brown the skin up more than usual. Once done that, I added red skinned potatoes, a large onion and a couple of carrots on top of the trivet. I cut the large potatoes in half because I’m only cooking for 15 minutes. That’s all the thighs need so I’m hoping that is enough for the spuds as well.

We had spent the day today ‘unplugged’ from power, using our solar panels. Earlier when the winds got wild, the thumbnail sized rain drops fell and the black clouds moved overhead I ran out and plugged us back in. I didn’t want to get caught and having to do it last minute.

The IP has built up pressure, released some steam and has started cooking our supper. We were eating by 6:30, all but the corn cooked in one pot. And if I’d planned it, I could have added that too. The chicken was delicious and the vegetables were done perfectly. There were leftovers for another night, but only potatoes and veggies.

The dishes were cleaned up by 7 and rather than watching more recordings, we watched our regular Sunday night show, American Idol. It was 3 hours so I’m not sure I can stay up to the end. I’ve asked Bill to record the last hour as I need to get up early for work tomorrow.

As crazy as this day was for weather systems, we had a good one. We got things accomplished and enjoyed some pleasure time doing what we enjoy.

Thanks for your visit!