Heading out to Work, Dullness Returns, Hat History and a Tea

The Ridge
On Wednesday, May 22nd, I woke before the 6 o’clock alarm when I heard Bill and Clemson up. Bill was hopping in the shower and Clemson was nesting beside me after coming back to bed. Scratch, scratch. I took my ear plugs out, opened the blind and laid there listening to him until 6 when I got up. I’d decided not to have my tea before I went to work and take just water this morning.

We were both getting ready for our own day of work. Bill’s got changed up last night. He had things in motion for the morning, not having to report to work until noon for an afternoon client. That changed when Nicole, his boss at Can-Am asked if he would drive to the Guelph area and pick up a client’s 5th wheel which needed to go into the shop. Apparently, Bill did their orientation and they asked for him specifically to pick it up. I guess he left an impression. 😊

So, we gave Clem a very responsible treat, one to look after the house and he took it eagerly (almost too eagerly!) and walked away. I followed Bill and Black Beauty out the lane and we both crawled. Both Geese families were making their way down in front of him. We saw Jamie do the same thing last night when he left. They seem to choose the most inappropriate times to take a walk with their babes.

We parted ways in Durham, Bill turning right onto #6 and me turning left to the Laundromat. I did good again and felt very comfortable again in the hour and a half. Today, something new as I had to replace the big toilet paper roll in the washroom. First time for everything, next it will be the paper towel holders. I’ve done those before when I worked in the school board. Often, I fiddled with those to free up jammed paper. I was home by 8:45 am, done for the day. I love that!

I made my tea and settled to read blogs from yesterday. Bill is delivering Avon to a customer in London tonight for me so I chatted with her to get her address. She sent me the money transfer through email so all he has to do is drop it. He offered so what the heck? I’m not asking him to do anything extra that he doesn’t want to do. That done, I hopped in the shower. Not sure when I’ll hear from my sweetie with the added miles to his trip.

It was around 10 when I kicked the furnace on for a run through the program and hopped in the shower. I’ve already laid out my clothes for this afternoon. It is an opportunity to dress up and wear an old-fashioned hat for the occasion. Around 11:00 Bill called that he had arrived safe and sound at Can-Am so a sigh of relief. The wind gusts are wild again today and I’m sure I won’t see much sun, if any.

People I talked to this morning in the Mat seem to be resigned to this being what the whole spring/summer will be like. I’m not giving up hope that easy! If I have to do a Sun-Dance, I will!! I made myself a coffee and warmed up a piece of quiche. It wasn’t long before rain spatters were joining the wind in hitting the south facing sides of the Suite. Oh goody, more rain! (said in disgust, of course).

I cleaned up the few dishes and brushed my teeth and blew dry my hair before getting dressed. I’m heading into Durham to Pat’s as she is going to drive today. It was nice of her to offer and once I was sure that she didn’t mind (I invited her after all!) I was happy to give up the wheel. I didn’t know until last night that I would even have Ptooties at my disposal but I’m happy all the same. So, I drove into town at 12 noon and Pat and I discussed a few final accessory options and we left there around 12:45.

Gayle was ready when we pulled in at her place and soon we were off! Pat and I were in the 1940’s style with our dresses and hats where Gayle, who I have always thought to be in fashion without any effort, dressed in the flamboyance of ‘today’s’ Red Hat Society. The colours were right and the hat was a typical Gayle who spent the winter in the southwest. We all looked very fashionista! It was a treat to step inside the newly refinished railroad car.

The tables were set up for 4 with the delicacy of donated tea cups and saucers, table linens and padded seats. Small nameplates indicated where we would sit which was nicer than picking and choosing according to arrival. You took what you got without any fussy to-do. Several ladies wore hats and others were able to borrow hats from the display table that were loaned to the museum by Dr. Cobbler’s, a shoe and swirls store in Owen Sound.

Wendy talked up a storm about the history of hats from the early 1600’s up to the 1980’s where attention to hats kind of dropped off the earth. After listening, hearing and seeing her beautiful personal collection, I’m in love with hats!

We can all say ‘oh, I don’t look good in a hat’ but let me tell you, there is a hat for everyone!! From the curvature of a ‘fashionata’ to a ‘pillbox’ to a ‘merangue’ we should be able to find just the right thing for our noggins.

When she finished speaking, we were served the delightful array of desserts with tea. These were provided by another shop downtown called ‘all things T’. Delicious! 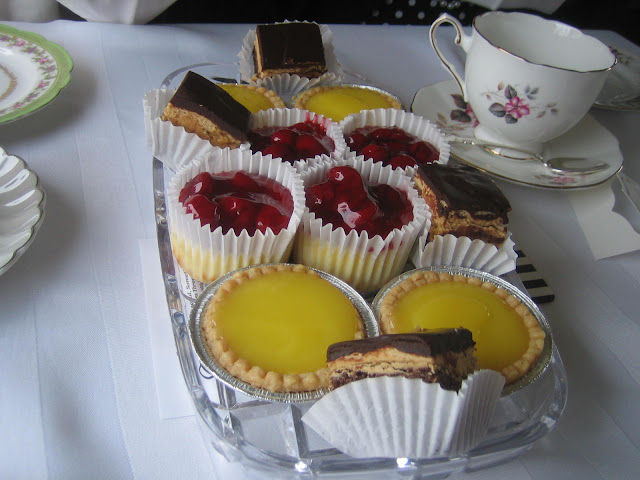 We all enjoyed this afternoon very much and soon enough it was time to head home. Pat dropped Gayle off at home and I picked up Ptooties to beeline home to Clemson. It will be a quiet night for the two of us. I’m not too hungry so after feeding him, I made myself a cup of creamy tea (as if I hadn’t had enough) and relaxed.

Again, the dilemma of supper. Maybe some bacon and some fried sweet potato and onion. We’ll see. This has been a great day from beginning to end and I have an interesting one around the corner tomorrow. Stick around to see what that means!

Bill called at 5:30 to let me know he was done for the day at 4:30 and was going to Southside Family Restaurant for fish and chips. I’m glad he had a good day. We’ll chat later tonight before bedtime.

The rain didn't dampen our day any although it made an appearance while Pat was driving. Reaching the mid 50's/double digits in Celcius, made for not too bad of a day. Chatting with a friend on email about beliefs, many have said when the frogs stop chirping for 3 nights, there will be no more frost. I'm listening and this is Night One. Hmm, I'll keep you informed!


Take care and thank you for stopping in! Dig out your hats, folks!

Email ThisBlogThis!Share to TwitterShare to FacebookShare to Pinterest
Labels: Dull day, Hats on for all of us!, work for both of us
Location: 1st Ave W, Owen Sound, ON N4K 4K7, Canada