Waking Up in Kansas but Where’s Bill? Outdoor and Indoor Stuff

I slept well on Wednesday night, must have had something to do with Clemson being curled up closer to his Daddy PLUS the fact that my sweetie-pie was home again. Bill pulled in right as expected, at 10 pm. I was fading fast in the chair and had just closed my book before starting a new chapter of Harlan Coben’s Stay Close. With droopy eyes and a glance at the clock, I heard Bill on the step.

He brought his stuff in and I, the dutiful wife, said “I’m not helping you unpack the cooler tonight, leave it until morning”. He didn’t have anything to unpack after all as he didn’t go to Costco this trip. Within 10 minutes after a nice welcome greeting, I was in bed. He wasn’t more than 15 minutes after me. Clemmy curled up with him under the covers. We were rocked and rocked some more. Up here on the Ridge there is no shortage of roller coaster rides when it is windy.

On Thursday, May 9th when I woke and rolled over, Bill wasn’t beside me. My first thought after hearing and feeling the wind through the night was “oh no, did he get blown to Kansas?” or are we in Kansas and he’s fluttering around Nebraska or Utah? Then I noticed Clemson beside me so figured Bill hadn’t had need to step outside yet. Phew! He was downstairs with his coffee. Ha ha.

The winds were and still are crazy strong. Twice his wind vane blew over until he finally gave up on mounting it. How windy is it? Um, ‘really windy!’ At least the temperature was fairly mild at 48F/9C at 6 am and is now 52F/12C at 10:30. We read some blogs to catch up and Bill made a coffee in his new travel mug. He headed down to the Hangar to do some more wiring. With the door closed he was warm enough.

At 9:30 I began frying some pea meal bacon and eggs for breakfast. I knew he’d be hungry. After eating, I sent him back down while I did the dishes. I haven’t decided what indoor hobby/job I’ll get into yet. 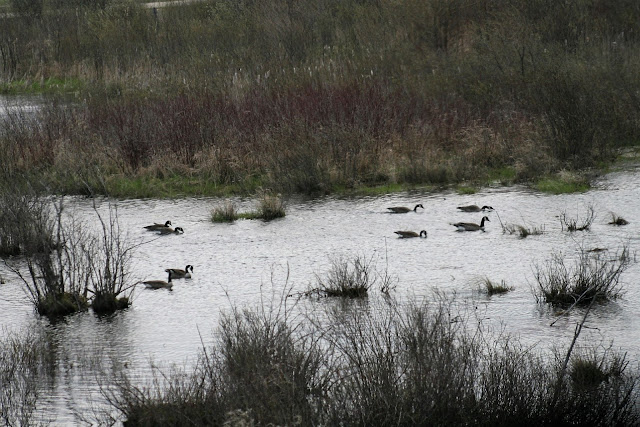 I laugh at the geese on the pond this morning, as I look out our window. They usually stick together in twos unless they are heading south or home again. They squack at each other when others invade their space. Yesterday was a day full of that.

This morning, they must feel that there is safety in numbers against the wind. They are sticking close to each other as they swim, bathe and are blown across the pond. A very unusual sight. Looking out the window behind my dining chair, to the west, you see how strong the wind is. Our pretty flag from yesterday is frantically doing a wind dance today. The King chairs which I had moved yesterday facing west were tipped over. Bill has stood them up once already and now we’ll leave them like this so they don’t get damaged. Did I say it was windy? At least 35 mph winds with gusts higher than that. I have no hope of an enjoyable walk.

I made myself a coffee and did some reorganizing of space. Our under the table cupboard is very handy for kitchen ‘things’ not used regularly. We all have cupboards like that, I’m assuming. This is the biggest space for me to store Madame IP. She just doesn’t fit in too many places and I don’t want her on the counter or island where it is a constant move here and there game. Our pretty red Air Fryer – same story, although it is somewhat smaller and less weighty by far.

Our cupboard beside the stove and below the dish pantry has a slide out tray. This is perfect for our Keurig and toaster. They can remain plugged in at all times. There was room behind the toaster for the Air Fryer so that is where it went. This made sense EXCEPT for the fact that I use it much less now than Madame IP. You can see where I’m going with this. I remove Madame IP from the lower space and put ‘Red’ (air fryer needs a name too!) down there with the tea kettle and tea pot.

There isn’t room behind the toaster (no name – it’s just a toaster) for Madame IP so I need to get creative. The toaster goes in back, sideways and she goes in front. She doesn’t need to be plugged in there as when I need to cook, she’ll sit on the island. It isn’t the easiest to use the toaster BUT we don’t use it often anyway. The tray comes out enough that you can still access the slots and the control buttons.
P – e – r – f – e – c – t! 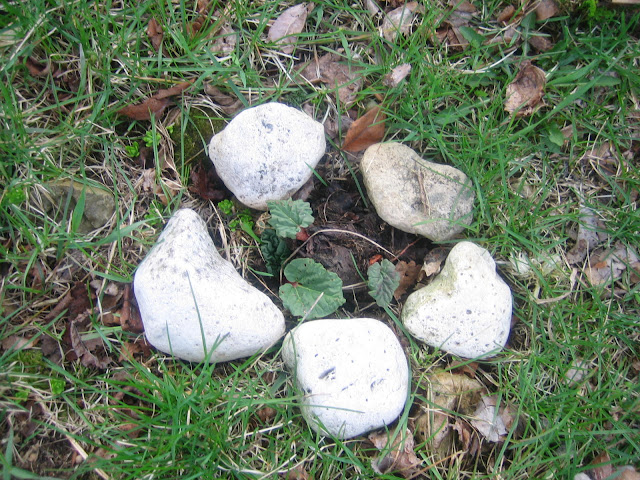 I mentioned the Keurig and if you recall, Mr. K  he was acting up last winter. Well, he still is but only once in a while. He works fine with the exception of a leak from underneath somewhere. We keep a dishtowel handy and wring it out when it needs it. Strange how it only leaks on certain days but he still makes fine coffee! Bill texted from the Hangar, in need of something from the kitchen so when I walked that out to him, I was surprised that even though very windy it wasn’t freezing out there.

I remained outside for at least an hour picking grass out of the flower garden.  I don’t get many weeds any more, it is 90% grass. I pull it out by the roots and hopefully soon it will be a memory. I was very pleased with my progress but again, I stopped before my back told me too. I like to walk the property, at least along the pond and especially around my gardens.

I was tickled to see that all 8 plants of rhubarb I’ve transplanted have sprouted very well. Whether we can eat from it this year, is yet to be seen but we’re on the right track! The biggest surprise was not my peony bush (which looks wonderful!) but the 2 provincial Trilliums that I dug up from the bush last year and replanted. Yay!

I came inside and washed up. Oops, I keep forgetting to put my work gloves on! So, my long fingernails were quite dirty. No worries, I was going to trim them today anyway. After doing that I looked after my toenails and painted them. Okay, now I’m ready for warm weather. Perhaps that was why things have been delayed, my toes weren’t ready yet!

By 1 o’clock, I was getting a hunger on so cut some cheddar cheese and 2 apples before calling Bill in. I figured he’d be feeling a nosh as well. I wasn’t wrong. He had been working all morning and was also done for the day. We sat together and relaxed with our snack. Clemson was up on the bed sound asleep and soon enough Bill dropped off too. I got into my book and got a few chapters read. It is another good one. Clemson was a pest when he got up and by 3:30 Bill fed him. Otherwise, there was no rest for us!

At 5:30, I heated up hamburger stew and rice for supper. That was nice and easy and we enjoyed it. Still a couple of leftover servings. After finishing up, Gerry called for Bill’s help at the acreage. Bill never says no if he can help someone so loaded up his chainsaw and drove over. It was then that I went out with Clemson and noticed just how nice the day had turned out. Mind you this is at 6:30, kind of late for the day to turn nice.

I walked around and was happy that the wind had died down considerably. We don’t need to be rocked to sleep again tonight. I looked after the dishes while he was gone. Bill returned by 7:30 and hopped in the shower. Proof that it was toasty out there. Donna says the black flies were making an appearance over there. I hope they stay away this spring but I’m not counting on that.

This has been a pretty good day. The winds were a little much but we still managed to get a few outdoor things done. We reached a high of 64F/18C and that was at 6 pm! I hope you had a good day too.

Thank you for stopping in to see what we’re up to.