A Short Work Day for Each of Us, Clean Ptooties, Purging

On Monday, Mar. 15th Bill didn’t have to get up as early. He got a call last night that they didn’t have to be at work until 9 so we didn’t get up until 6:45. Then it was a bit of tripping over each other in the kitchen to get ready. I didn’t need to pack a lunch today since I was only working at the Mat. I just prepared my coffee thermos and brought my tea upstairs.

Bill had his breakfast and packed his lunch before joining me upstairs until 7:30ish. We each read our books and I finished The Cruellest Month. I enjoyed it very much. Now the challenge of finding my next read. 😉 Such choices! I left the house at 7:55 and arrived at Durham with minutes to spare before 9. I fuelled up first since I was almost at ½ tank and then drove across to the laundromat. It wasn’t too dirty although there were three washers newly tagged as ‘Do Not Use’.

I knew the one needed an elastic on the coin dispenser thingy and Jamie can do that easily but the other one was questionable. I ran $3.50 through and it worked just fine. I know there are issues with the older machines but sometimes the issues are with the users themselves when they aren’t patient enough to let the coins settle. Anyway, I removed the tag on that one and carried on with the cleaning. I only had two customers in today but they didn't stay inside.

It was 10 to 10 when I left even though the clock said 10 to 9. I had no comfortable way to reach the clock and Jamie is tall enough to reach it without climbing up on the chairs. I left it for him. I debated driving to the Ridge but thought there wouldn’t be much change in 2 days so decided to wait until Wednesday. I may be working at the auto shop, just not sure at this point if there is work for me. We’ve finished the truck; well, I have done all I can do.

When I reached Paisley, I decided to take Ptooties for a wash. $4 later she looked pretty spiffy and ‘we’ drove home. It was a lovely sunny day but that wind ‘bites’, as Bill says. Perfect word for it. No doubt we are anxious to be back in our home so there are some items in the closet that don’t need to go with us. With an afternoon off, today was a good day to go through some of the winter/long sleeve shirts that I bought for this winter specifically. Most were second hand with a few new ones at sale prices. 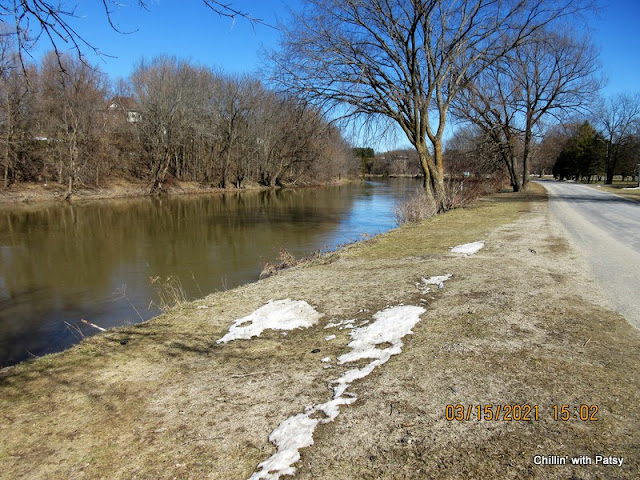 I also wanted to go through the craft things I’d brought and put them in a semblance of order. With that finished, I felt better, more organized and went down for a cup of my soup. Working at the puzzle while I ate it is relaxing and I would put pieces in place in spurts then stall for 10 minutes with no success. LOL The joys of making a jigsaw puzzle! 😊 Around 3, I decided to bundle up against the wind and get out for my walk. The sun was calling me.

I hadn’t been down Water St. since the snow melted on Thursday so headed that way. It was so nice to walk along that part of the river through the campground. Aaah, camping, how nice to see the campsites. The river is definitely high but so much of the snow that was along the bank has melted that I’m not surprised. We needed it to get cold again for a bit to let the rivers catch up and spread the water out before more melting occurred. There isn’t a lot of snow left though and that is still a good thing.

I was on the back street when Bill texted at 3:15 that he was on his way home. It would be 15 minutes before he arrived so I made my way along the streets then up to Queen St. to collect the mail. Nothing for us today but stuff for the landlords at least. I waited outside in the warmth of the sun (out of the wind) for Bill to back in and we came in together. It’s nice that he had a bit of an early day too. He poured a Zero Coke and I made a tea before we came upstairs.

What a difference it makes when I’m only out of the house for 3 hours, the day seems so long. When Bill asked me if I’d spent any money today (he was checking the bank online) I said no. Duh! Completely drew a blank that I had been out this morning to work and got fuel. I swear, some days I feel I’m losing it!! 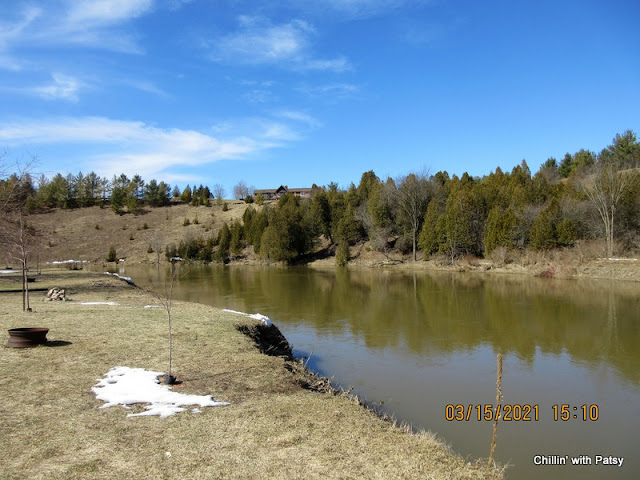 I was going to down at 4:30 to work on the puzzle while he rested but decided that I have tomorrow to do that. So, I dug out my next book. An Alice Munro book of short stories called The Love of a Good Woman. I don’t enjoy short stories as much since I just get focused on one group of people and then have to get used to new characters. But we’ll see! 😊

At 6, we went down to get supper going. Since I had my soup at noon, I wasn’t keen on having it again. Bill had already spoken for the last of the chili which worked for me so I, instead, had a ham, cheese, pepperoni quesadilla with sour cream.

It was very good. After dishes and his lunch packing, we returned to our room. I watched Jeopardy at 7:30. Bill and I were going to go down at 8 to watch our 9-1-1 programs until 10 but we learned that they were reruns now until April.

It was a good day. I hope you enjoyed yours too!