A Peaceful Day and a Stroll along the Lake

On Thursday, Mar. 18th after saying goodbye to my working man, I slowly eased myself out of bed. Bill asked “what are you up to today?” I really didn’t have anything planned other than a walk and, some puzzle play so he made a suggestion. Last night we’d discussed a gift for a certain someone so it was a good idea to search something out. I added that to my agenda. 😊

I had my tea and made a plan for supper before coming back upstairs. I didn’t get my blog finished so that was the first thing and then I bundled for my walk. The temperature was reading 0C/32F but I knew it was windy. No precipitation though and I knew that we ‘could’ see some sunshine later but that would be when the winds were gusting to 40 mph too. It was a good time to get out there. I’m glad I wore my scarf but I left the hat behind.

Towards the post office first, where I dropped a card in the box and carried on to the end of the main strip. The school crossing guard was there and so we chatted a bit before I crossed the street and caught the first trail to the south.

The one through the back yards still had some snow and I was in my running shoes. The wind was raw so I had my hood up most of the way. When I met the same man with his poodle/yorkie, (Porkie? Yoodle?), I got a doggie fix. What a cutie.

I checked the Book Barn and picked out a copy of Oliver Twist, a movie I’ve seen but may or may not have ever read the book. Now, I can and isn’t life all about choices? Back at the house, Wes had left and I chatted a bit with Susan before making my way upstairs. Next time I went down was to make a coffee and I took it out to the garage. No worries about the puzzle now! It will be done the next time I sit back down at it. 😉

W & S went out when he got home and when my coffee was done, I decided to go then too. It was just after 12 when I left. I drove straight through town to the Independent, it is closer to Port Elgin than it is to Hanover and I was looking for something in particular. Once I easily found it, I left and drove back towards the centre of town where I caught the first street ‘to the Main Beach’. I may not get another chance to drive along the lake and summer is wa-a-a-y too busy.

I drove first towards the marina and parked there. I’m glad I did because I found the paved trails for walking or biking right along the water. The wind was still cool but I was bundled and it was actually better in amongst the trees. I took some pictures and turned back. It was cute seeing the small railroad track, I’ll bet the little people love that! Before I got off the trail, I heard the whisper ‘hug me’ and realized it could only be that tree – right there! So, I gave it a hug. I’m perfectly sane, by the way. Ha ha 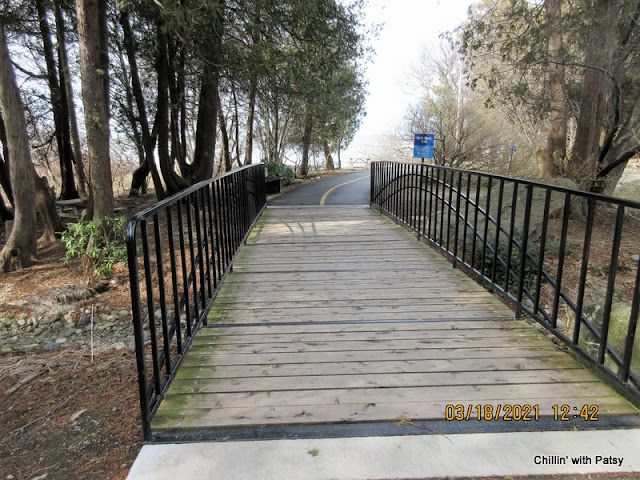 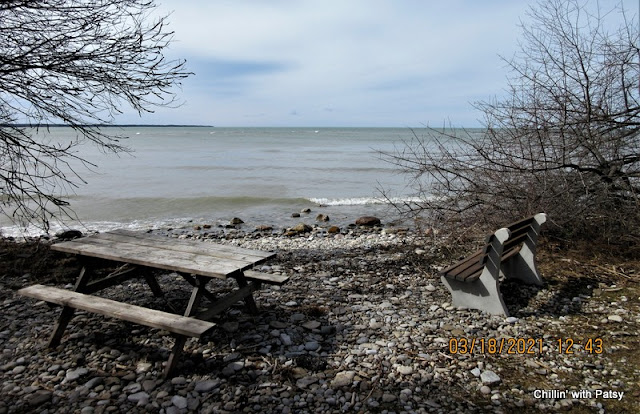 Lastly, after leaving there and driving around the Main Beach without stopping, I stopped at the LCBO instead of going to the one in Paisley. I’m still shopping local. I got what I needed and scooted home. More puzzle time until I forced myself to stop and make a tea. I felt like a rest so started my blog first and then stretched out on the bed with a book.

FYI, that Alice Munro one with 8 short stories? Nope, not for me. I read the first story and it was confusing and didn’t ‘end’. The second one was worse. Within the first chapter, about 6 pages, I was totally lost who she was talking about and it sure wasn’t gripping me. Another choice. Close the book, give it a 1* rating on Goodreads and move on. I pulled out a James Patterson mystery that is bound to capture my attention. I’ll let you know! 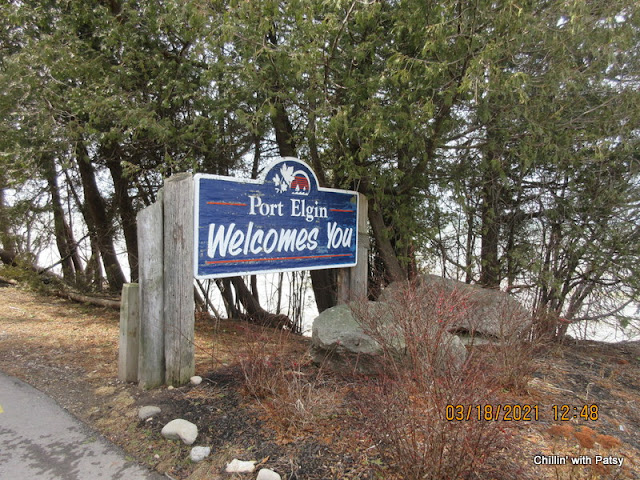 Bill texted within 6 minutes, (no kidding!), of me getting on the bed and covering up my legs with a blanket. 😊 I guess I had a couple of short chapters read. Isn’t that always the way? It’s okay, I’m happy when he gets out of work and home by 4:30 ish. I went down and unlocked the door for him before repeating the process. With a big day planned tomorrow (we’re getting the Suite!) he didn’t want to snooze today. Hopefully he will have a better sleep tonight.

Wes and Susan were going out for a short bit after they’d eaten so he called up that the kitchen table was all ours. It was only 5:30 but we were quite happy to start our burgers. Simple meal and we were upstairs with dishes done and a grocery list started for Costco by 6:30. The weather sounds favourable for tomorrow, the weekend and the best part of the week so that is good news.

We will make a few trips, maybe only two, on Saturday and each time I go that way to work. Once we start, it shouldn’t take long. This was a nice day, with a walk, a lakeside stroll, a drive and some relaxing here at home. Once again, your condolences, words of comfort and prayers for us but especially for Derrick are very much appreciated. Thank you!

Posted by Patsy Irene (Chillin' with Patsy) at 6:10 PM

Email ThisBlogThis!Share to TwitterShare to FacebookShare to Pinterest
Labels: a nice day, the lake
Location: Paisley, ON, Canada