Another Load and All About Easton (2 year old overload)

Sunday, Mar. 21st we were up and had Ptooties loaded with more boxes and clothes for the Suite by 8:30. Bill had also packed all of his hobby stuff from the basement here in Paisley into Black Beauty for his Monday drop off after work. We’d eaten and took coffee, tea, a snack and a change of clothes for the afternoon party. Today, it was a small gathering for our 2-year-old Easton.

We unloaded what we had at the Ridge and got cleaned up and dressed. It was just around 12 noon when we pulled out, headed for Stratford. We were the first to arrive to see an excited little boy who brought a new car over to show Grandpa while I took little Hadley from Momma. Bill’s other 3 daughters and significant others arrived soon after.

Easton opened his gifts as typically as a boy that age would. Not interested in clothes, or wrapping paper until he got to some neat toy that would slow him down. It was a hoot to watch and I know later he’ll get the enjoyment out of all of his gifts. The floor was covered in Paw Patrol this and that. We gave him a Paw Patrol Chase motorcycle, a wooden piggy bank and a P.P. backpack. We had cupcakes after he blew out his candle(s) and crackers and Matt’s cream cheese dip. 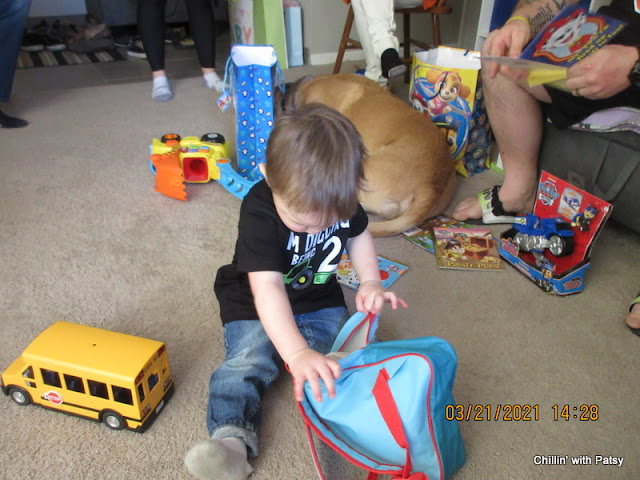 After Jess’s sisters all left, we headed out to get our table at Montana’s for supper. The 6 of us were extending our visit while sharing a meal together. The whole day was nice and could only have been made better by not having to wear masks. From being in the ‘green’ area with very low Covid virus numbers, we felt very unnatural being with family wearing them. Because of everyone coming from different areas, it was decided to be the safest thing.

I enjoyed watching Easton the whole time. He was who I was there for but it was also very nice to see the girls and their spouses. The pandemic has kept everyone apart with invisible barriers. Bill and I enjoyed the time also seeing little Hadley. She was quite fussy for the most part but settled down in our arms a couple of times and it is a blessing to hold a sweet sleeping child.

For me, the party was about the little guy and I didn’t get involved in the adult conversation much at all. Easton reminded me that the connection I feel with him is just like what I had with my first two grandsons, Taylor and Jacob, during their early years. We were close in proximity and close in our affection for each other. I loved that then and love it now with Easton.

We had reservations for dinner and were seated quickly. I had a large chicken Caesar salad which was very good and Bill had the Canadian burger and fries. We were happy with the food. When we walked out of the restaurant, my heart swelled to see the birthday boy proudly sporting his new backpack. 😊 The drive home was uneventful with the exception that Bill missed a turn towards Paisley – he was headed for the Ridge! Ha ha. Soon enough!

This was a great day and we are kapooped. He made his lunch and I wrote my blog. Pictures will be added in the morning.

Posted by Patsy Irene (Chillin' with Patsy) at 5:39 AM