A Repeat Day, More Physical Work, Half Day for Bill

Wednesday, May 19th, hump day, already. The month is going quickly. It was going to be another summer-hot spring day. No complaints here but then I’m not working outside like many are. Seems like us Canadians are never happy with the weather!! 😊 I had a plan in my head to go for a walk first thing but that changed.

Bill first woke me at 4:30. He was dressed and told me that there was something on our roof and he was going up to check it out. I could hear it too, sounded like something chewing or scratching up there. When he came back in, he reported that he couldn’t see anything nor could he see any damage or evidence of a visitor. We’re not losing our minds though, must have been a bird?

He did report that the solar panels are really dirty so I guess that is a job for another day. Meanwhile, Gibbs woke up with the excitement of Daddy being up so Bill took him out for his piddle and poop. Back in his crate he went and we all slept until 6 when the alarm went off. Bill wasn’t 100% sure where he’d be working today so had his coffee and I got up with him around 6:30 to sit with him. I would walk when he left.

It wasn’t until almost 7:30 when he got his destination and was on his way down North Line. By that time, Gibbs had fallen asleep in between our clogs at the door so I decided to have my tea first. You know what happens with that? Later turned into not today. 😊 Oh well, I’ll be doing some physical work today so that will suffice for my exercise. Gibbs had been out a couple of times with me and seemed to be ringing the bell each time. He rings it though and then hides under my dining chair. Not sure the message is getting through. Ha ha

Once I was ready to get to work, I put him inside. In the storage shed, I retrieved my lightweight weed trimmer. Bill said it had gas in it but it turned out to be just a bit, maybe half hours’ worth of trimming. I actually managed to get it started which amazed me! After restringing it, I went to the corral where I want to plant the shrubs and cleaned it up in those areas. It was hot out and I had my screened bug hat, long sleeves and long pants on, making it even hotter.

I dug two holes deep enough for the root balls and then trimmed around a couple of other areas until the gas ran out. Walking back up the lane, I decided to transplant some of my phlox. It would be great ground cover along the rocky areas too. Again, the problem I have in that area is not having enough good earth. I used some that I dug up from the holes and got three batches planted and watered. I hope they take. They seem to just lay on the ground to root.

Oh, my goodness was I hot! When I came in and washed my face, neck and hands, my face was scary red. I gulped a lot of water and sat under the awnings where there was a bit of a breeze. Donna and Gerry were going to bring us some dirt that they had from when the boys extended their deck so I was hoping to use some in the holes when the shrubs go in. As it turned out, they wouldn't be over until late this afternoon so I thought after lunch I’d go get some black earth.

My lunch was a coffee and another wrap, repeat of yesterday. It was very good with lots of good food choices in it and on the side. Bill surprised us again by getting home by 1. They finished digging post holes for a new deck at a cottage and were all too hot and bug-bitten to carry on anywhere else. I’m glad I sprayed Bill before he left the house this morning but the black flies still found a couple of spots on his arms that got missed.

He snoozed, Gibbs crawled UNDER his raised recliner and did the same. We have to keep an eye on that or he’ll get stuck under there. He seems to like the safety of something overhead. I drove into Durham, first to Foodland for eggs and yogourt for Bill’s lunch, then to FS Coop for bird seed and top soil. The price for the bird seed was ridiculous (is always ridiculous) but the dirt was $2.99 for 25 litres. A great price so I bought two.

Back home, the boys were outside on the patio mat so we sat for a while and then put Gibbs inside while Bill and I went to work. He got his weed trimmer out and I took my wagon down to the corral. I sure hope the shrubs and my other plants survive and grow. After I finished, I refilled the 2 watering cans and went to the dreaded hill where my garden is. I had 4 freshly planted dianthus plants that were looking pretty sad.

Doing my best to give them a good watering, I slipped and tumbled down the hill. How many times I envision that and today it happened. Out of the corner of Bill’s eye, he saw me on the ground and stopped weeding and checked on me. I thought I’d sprained my ankle but luckily it was just a twist and my knee probably got the worst of it. I told him I was okay and just took my time getting moving again. I knew that was it for me though, today, I was done. I hobbled just a wee bit but it eased out on its own.

After putting things away, I got washed up and brought Gibbs out to sit in the shade with me while Bill finished. He got a lot done and after a second tank of fuel, he quit too. Donna texted around 4:30 that they were loading their truck with the dirt and would be heading our way soon. Supper wasn’t anything special, just the last of the lasagna so no big deal when it just had to be warmed up.

I was going to use the dirt they brought to plant my shrubs but now we have another use for it. They arrived before 5:30 and Bill showed them where we wanted it dropped. Gerry and Bill set to work emptying the back of their Avalanche and I showed Donna where my shrubs were planted. We talked about how our garden plantings have seemed slow coming up and agreed that it might be from the warm March, a spurt in growth and then the frost in May.

We sat with the guys while Gerry and Bill had a cold beer. That was when I brought Gibbs out to see our company. He gets so excited to see them and they get a kick out of him too. He really liked Donna’s shoe laces but behaved quite well for the most part. 😊 He is still a pup and knows how to entertain like a pro. When they said goodbye at 6:30, we came inside for supper.

It only took 7 minutes to reheat and we were eating by 7. Finishing the lasagna as well as the last of the cheesecake. We have a BizyBee auction closing tonight between 7 and 10 so kept an eye on our winning bids. It is like a real auction where you watch and wait and then make the decision when to ‘let go’. There are just a couple of things I’m interested in and a couple more I’m keeping an eye on.

After dishes, Bill made his lunch and then went out to close up the storage shed and Bunky before we joined together to watch some useless tv. There isn’t much on tonight so who knows what we’ll find. This was a good day. We may see some rain tomorrow and that will be good for my new plantings. It will also be quite hot so we should be able to score more solar power during the sunny hours. 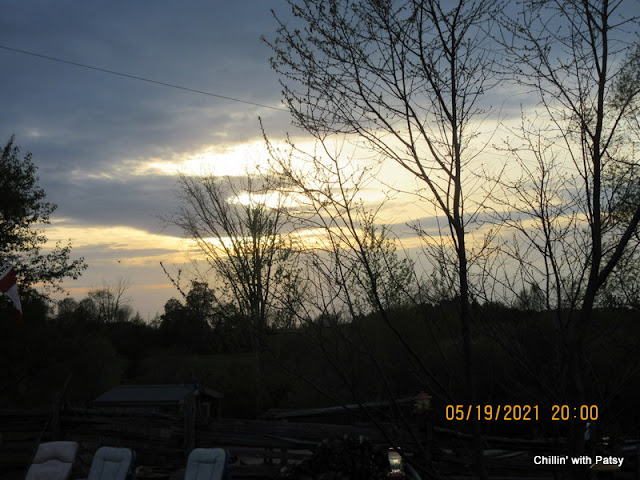 Posted by Patsy Irene (Chillin' with Patsy) at 7:33 PM