Trying to Get Caught Up, Work Tired Me Out

On Friday, May 28th, we were awake early. Gibbs started whining before 5 so Bill took him out and they both came back to bed. The distraction was what woke me and it took Gibbs a little longer to settle down. Finally, we all slept again. Unfortunately, it was raining so Bill had to check with Billy about their work today. When you’re working outside on a deck, you can’t work in the rain.

I had to get up by 6:30 so I could be out the door by 7:15. If Bill goes to work, I need to feed Gibbs at 7, clean the Mat, get back home by 8:30 to let him out for a piddle and whatever else. 😊 Then drive around the corner to the shop for 4 hours work on the van. As it turned out, Bill’s day was cancelled, which took some of the pressure off me. The biggest shock of the day was to step outside to a wet snow falling from the sky. What the ??

Certainly not something we’d expect to see on May 28th but there it was. It wasn’t heavy but big white flakes were enough for me to have the wipers going. I was back from town at 8:30 and stopped at the Suite to make a coffee in my thermos and grab a snack bar. I felt relieved that I didn’t have to put Gibbs in his crate for 4 hours. It would be good for Bill and Gibbs to spend the morning together. Good for each of them. 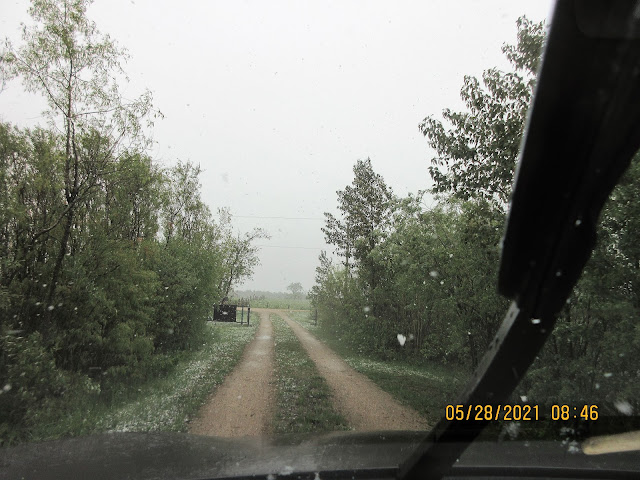 At M’s, it was funny to see old sheets covering the van roof and drooping down the sides. A huge Christmas present! We both worked together taping, blocking and papering the van fenders and sides before we could do any sanding. This van was only getting the lower 10” painted and just in a beige gravel guard. There were other areas that needed attention but the owner didn’t want to put that kind of $$ into a 2007 that was just used for work.

Before I left, we had the van covered, looking more like a gift, and the front wheel wells with a good head start on sanding down to the galvanized steel. I meant to take a picture but when my time was up, I said goodbye. M will call me when he has more work for me. When I returned home, Bill and Gibbs were sitting in their chairs. Bill in his and Gibbs in mine.

He was so excited to see me that he jumped right over the arm onto the floor! He really is too small to do that so we’ll try and prevent that for a while, until he grows a bit. He didn’t hurt himself but still. We had some lunch and because I felt quite tired, we sat for half hour together. All 3 of us.

Around 2:30 we went for a drive to Bill’s work site. Bill and the boys are going to work on building a wooden stoop for our Suite door. Bill needed to pick up a few tools that they’ll need. Having a better step would be so much easier and it is something we’ve talked about since last summer. Now that we have a new baby, it will be nicer for him too. Clemmy always hated our metal stairs even with the runners on them.

It was a nice country drive but first we went to Walmart where I picked up the things on our list. Bill and Gibbs remained in the truck. We made a stop at Home Hardware for a few things for Saturday’s job that our Durham hardware didn’t have. Bill showed me the nice big deck they are working on and I got to meet Patty, the home owner. Gibbs got yet another ‘ooh and aah’ for being so darned cute. 😊

We returned home and I took my book upstairs to try and read without the distractions of a tv. Bill was watching a car show. I read a chapter and soon had to close my book and had a half hour snooze. I was exhausted. For supper, we had chicken breasts in the convection oven, split a potato and some string beans. For dessert, Bill finished the crisp with strawberries and I had strawberries and whipped cream. It was yummy!

It was obvious that Gibbs didn’t get enough exercise today. He was a holy terror! He had both bill and I hopping until he had his supper at 7:30. Even then, he’d been out 4 times, doing a little job each time and then he’d ring the bell and sit there again. Finally, after throwing the ball inside to wear him out, he managed to flop in my chair for a doze. Hopefully tonight the pictures from today will download, I don’t know what the problem was last night.

This was a good day and I’m sure I’ll be asleep early. My walk is tomorrow and I have received some nice donations from a few of you so I thank you very much for that. The weather won’t be warm in the morning but at least there is no chance of rain or SNOW!!

Thank you for your visit. If you wish to leave a comment, I would love to hear from you!

Posted by Patsy Irene (Chillin' with Patsy) at 8:10 PM

Email ThisBlogThis!Share to TwitterShare to FacebookShare to Pinterest
Labels: getting caught up, work again
Location: Priceville, ON N0C 1K0, Canada