Puttering Outside and V-R-O-O-M! Power Outage and Birds

Saturday, May 1st we welcome a new month in the hopes that changes are coming – in the weather and pandemic lockdowns. Yah, we’re dreaming about the latter. I saw blue skies when I woke at 7 and looked out my small bedroom window. Yahoo! Never mind the bitter cold -3C/26F that was creating a glistening on the patio table.

Bill was already up; I didn’t even hear him get out of bed. While he did the banking online, I made our coffee and tea and we sat together. Around 8:30, he took a propane tank in for filling and to pick up a few various sized clamps to tighten the hose that was leaking. I hung the two towels on the line that were still damp from the soggy carpet. It wasn’t quite dry in there yet but one more day and it should be fine. 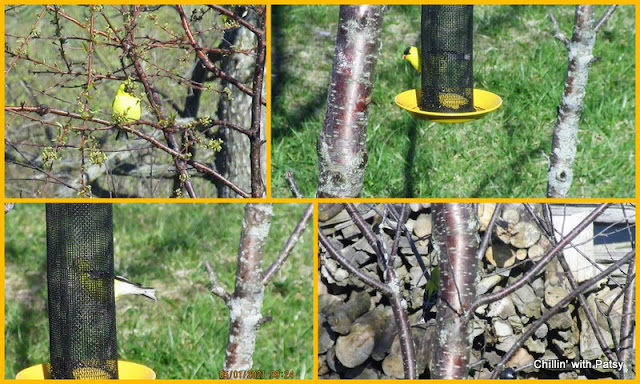 When Bill came back, he dumped our black and gray tanks before moving the lawn tractor and our bike out of the shelter. The gravel still hasn’t been levelled out and it needs to be, especially for backing the bike out, single-handedly. It weighs a whopping 750 lbs so on gravel it is a challenge without the motor rumbling. When I say rumbling, I truly mean ‘rumbling’. Chris had exhaust pipes installed years ago making it sound much like a Harley. I never thought I’d like that but I’m sure getting sweet on it. 😊

I got the bird feeders filled and then focused on my big flower garden. The lovely, healthy blue spruce trees are thriving BUT their branches start very low to the ground, which makes it difficult for some plants to grow under and around them. I trimmed them from the bottom up a row and the periwinkle was quite happy for the breathing room. Grass growing where I hate it growing frustrated me so I dug and pulled it from in the middle of newly sprouted hostas while on my knees.

Bill mentioned a couple of times that he was hopeful about us taking a ride so I wasn’t surprised when he rode down the lane and back. 😊 We were hoping for warmer weather but knew that we’d be lucky to reach the forecasted 12C/56F. That’s chilly for a ride, especially for me so we puttered away. I knew Bill would be going for water from the Acreage so I made him a fried toasted egg sandwich. It was waiting for him when he came in to tell me he was going. He was ready for a bite, it was 10 o’clock.

After eating he cut some grass up on the berm and you know that will jinx it from now on. We’ll be cutting every week or two. Be careful what you wish for, right? Sun and rain bring prospering landscapes! I finished with the garden, spreading another bag of mulch in the bare patches. It’s hard to spread it when there is so much ground cover but that’s okay, I did what I could and where it was needed most.

I don’t use landscape cloth mainly because the garden was there when we moved up here, with plants that Donna had already placed. Starting from scratch would be different, besides weeding gives me something to do when I’m bored. Ha ha ha. Sure enough, the wind picked up a bit and clouds moved in. When I was finishing a coffee, Bill said ‘you probably won’t want to ride now, it will be chilly’. It took me 5 minutes to think about that and the fact that if we didn’t go today, it would a whole week before we got out.

I was upstairs layering up, getting into my chaps, boots and coat in no time flat. “Let’s go!” I didn’t think my jacket would keep me warm, it isn’t a heavy leather jacket at all but boy was I pleased! We rode into Durham, got fuel and then took the long way back home. The only thing that felt cold was my chinny-chin-chin. I don’t have a face shield on my new helmet so made a mental note to myself to slip a double layer of my neck scarves over my head before we head out. That will work perfectly!

I was so excited to be out on two wheels again, I’d forgotten the free feeling. Bill is a very careful driver and with my extra eyes we do our best to watch traffic all around us. We have a radio system, which we’ve never had before, but we didn’t bother with it today so any chatter between us was my leaning in close to him. We were so happy to get out for about half hour and I remembered to take a selfie of the two of us on Jazz. We’re debating that name, with the treble clef on the back, it seems fitting. 😊

Bill spread some of the gravel he moved from the shelter out by our patio area. We’d like to get another half load sometime soon but for now, this is a start. Inside, my Easy Rider had a snooze, first time he’s stopped all day, and I set Madame IP to make some devilled eggs using up some of my many eggs. I had a cup of tea. Bill had gone to help Gerry pump his mower tire and had a beer so I knew he wouldn’t want such a mild drink. I’m just a tea Granny on cooler days.

At 2:30, I managed to get on to my sister’s Norwex party on Facebook. I’m interested in a couple of clothes but not in sitting through a live video of a product that I won’t buy so didn’t stay on long. I went on again to check out the 4:30 stream and it was more interesting. I’ll place my order on Sunday now that I know that is the process. I see where the window cloths will be a blessing, through this morning’s sun, quite a few streaks were left behind from my cleaning.

At 4:30 the rain was in Hanover which meant it was coming our way. I texted Bill in the Hangar so he could come up in case it was a downpour and he just made it. However, the rain didn’t last long and the sun came out for an hour or so. I turned the convection oven on to preheat it for supper but at 5:30, our power went out. Oh darn! I was planning on chicken strips and that is the only way to cook them. Hmm, plan B is to reheat our ‘pussy muck’ leftovers.

The sky was darkening again and the winds were very strong again. I moved some bird feeders into the Bunky so we didn’t lose all the seeds again, like the other day. ☹ With the inverter turned on, we were getting more use of our solar panels. Bill found online that there is a downed tree somewhere, over a power line, causing the outage with expected relief around 6:30. I think we’ll skip the chicken and fry up the leftovers. I’m feeling too hungry to wait.

Wow! That was a good choice. I cooked some mixed vegetables on the stove and fried the hamburger and macaroni mixture. I added a bit of broth so it wasn’t so dry and it was delicious! We had some of my homemade 18% custard for dessert and although not as nice and thick, still a nice light, carb free delight. After dishes, Bill checked and our power was back on. We watched a few of the Hallmark movies together, in between which I had my shower.

This was a great day! Thank you for coming by.