On Tuesday, May 25th, we followed the morning routine with Gibbs who seems to like waking up around 5:15. Each day that he comes up into bed with us, after he’s been out, is better. Bill left his leash on this time and that worked even better. With the loop over our hand, we can drop off and not worry about the bed edges. 😊

Bill got up at 6 and got ready for work. This is supposed to be a very hot, humid day. 28C/82F so I hope they have some shade. I wasn’t sure where they were going, neither was Bill, first thing anyway. I know they would be building another large deck around an above-ground pool but it depended on whether the lumber was ready for them. Last summer, when they built one at a neighbouring cottage, the pool was full and they dipped their hats in to scoop water over their heads.

The dark sky in the eastern sky last night dissipated or moved off and never brought anything but that was consistent with the weather reports for yesterday. This evening and overnight we are expecting a multitude of rain showers so we are hoping for that. Overnight is the best time! After the rain, we can get the garden plots tilled and other areas that Bill wants to level out and remove rocks. We should have called this Rocky Ridge. After Bill left for work, I went for my walk before it got too hot but I kind of missed the boat on that. Sweat was running down my back by the time I returned. 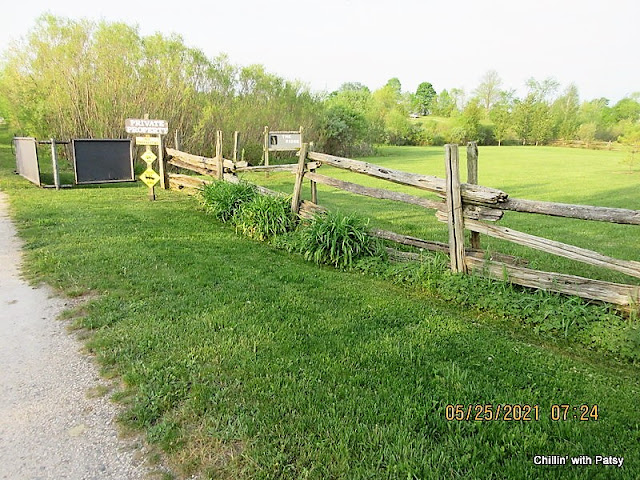 Gibbs was good this morning, ringing the bell for me when he had to poop but then later when I was in the kitchen (mere feet away from him) he piddled on the tile floor. LOL I took him out anyway and explained the do’s and don’ts to him and I’m sure he understood. Ha ha He loves the outdoors so I’m happy about that but sitting outside with him as much as he wants to be out there just isn’t feasible. We sat out while I had my coffee and updated my Goodreads and Book List.

I made a small batch of stewed rhubarb since that was the easiest and Bill’s request and then I made a rhubarb crisp. I’ll bake it later today. Black Beauty has an appointment in Hanover at Speedy Auto Glass. The silicone (?) or whatever was used to hold the rubber over the windshield is letting go. They didn’t do the replacement job last summer so it will cost us something. Not our concern, it needs to be secured.

I noticed how dirty B.B.’s windshield was yesterday so I took a wet Norwex enviro cloth and window cloth out to take care of it. So many bugs! I get the ‘save the environment’ thing but wow, without any cleaner, I sure needed to use elbow grease to get it clean. I’m pleased with the result though so won’t complain. A little hard scrubbing never hurt anybody. Right? 😊 I got cleaned up, did the dishes and started my blog post for today.

It was just after 12:30 that Speedy called me to see if I was available earlier than my scheduled 2 o’clock appointment. They had a cancellation. I was already upstairs in the bathroom getting washed and dressed to be ready to leave at 1:15. Earlier worked for me so I finished what I was doing and took Gibbs out for a piddle. I told him he had to go into his crate. 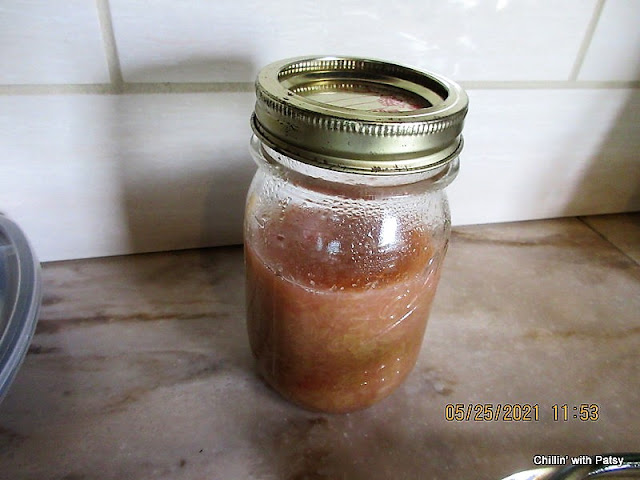 Poor wee guy, he isn’t keen on that but I can’t leave him out. Only because I don’t want him to get hurt, there is nothing within reach that he can harm. He’s still young enough to learn that when we go, he is fine and we will be back. As I locked the door, I could hear him through the open windows, crying his little heart out. By the time I got around to where B.B. was parked, he had stopped. I was at Speedy by 1:15 and I parked at the open bay and went in the office.

I’d taken my book but not a chair. Soooo stupid that I couldn’t stay inside. No chairs to sit anyway but she said ‘because of the lockdown, we’re not allowed.’ I smiled and thought, where the heck am I going to go? I had my heavy purse with a book (which afterthought – I could have left it in the truck) and it was hot, humid and windy. I walked across the front of MacArthur Tire and noticed that they had 2 lawn chairs out front and 2 comfy chairs inside their wait area. As they should.


It was an hour of waiting in a couple of spots before he brought the truck out. I paid the bill and drove to Walmart for a few groceries and was happy that my pick up order from May 11 was also ready. 😊 Two birds, one stone. Two stops in Durham for butter on sale and our water bottle fill up and then I was on my way home. Gibbs was ready for me too, after 2 ½ hours, he had settled down but was peeking out the door of his crate.

Bill was home by 4:30 and even though there was a nice breeze, it was still a hot 29C/84F. I had windows open and the solar panels in play but I should have turned the a/c on earlier. After putting groceries away and tending to the little Master, I made a cup of tea. Bill stretched out in his recliner and I soon joined him. For supper, a simple meal of toasted bacon, tomato and cheese sandwiches. Sounded fitting for such a warm day and tasted very good too.

While we ate, I preheated the oven for the Rhubarb Crisp. Bill ate the stewed rhubarb in one sitting so I guess that’s done. At least he liked it. There was a lovely breeze outside and it encouraged me to sit in my dining chair even after we’d eaten. The crisp really smelled good by the time it finished cooking. Bill made his lunch and I set out to finish writing my post  while watching Jeopardy and then went outside with Gibbs. It is so much cooler out there!

This was a busy enough day even though I didn’t work in the morning. I enjoyed being home with Gibbs.

One of my commenters asked about the bell process so I'll tell you what we do. It isn't 100% for us yet, but we feel that we're getting there. We hung a bell on the inside of our screen door, low enough for Gibbs to reach it with his nose. He ignored it for the first week and a half BUT every time we wanted to take him out, at first every half hour or hour or after he slept for a long time or after he ate. Because he is small, we have to pick him up to take him out. 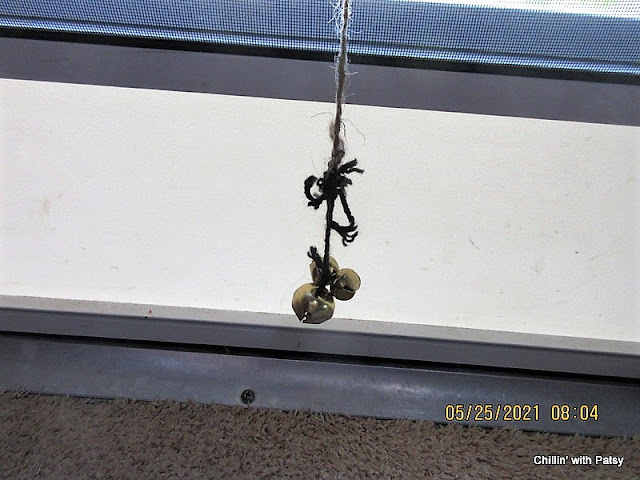 We set him on the floor at the door and use his nose to touch the bell, making sure it rings. We carry him out, tell him to piddle or poop and once he has finished, bring him back in. Even if he rings it again right away, we take him out. Now, after a week of him making progress, we recognize when he is playing with the bell or truly wants out. He has rang the bell and then run away but it is when he rings it and sits there by the door that we take him out. I'm sure it is true that you can teach an old dog new tricks, if we are persistent and consistent. 😊

Posted by Patsy Irene (Chillin' with Patsy) at 7:16 PM