Sunday, May 2nd was a fairly calm day to wake up to. It was just after 7 when Bill got up and I followed a few minutes later. I stripped the sheets off the bed first thing and then sorted the laundry into 2 loads, spraying what needed it. Usually it is only Bill’s work t-shirts and so that is all it was today. Rather than take the time for a cup of tea, I grabbed my water thermos and Bill carried the basket to Ptooties. The sky was one of those mixed bags where it was hard to tell what the day would bring. 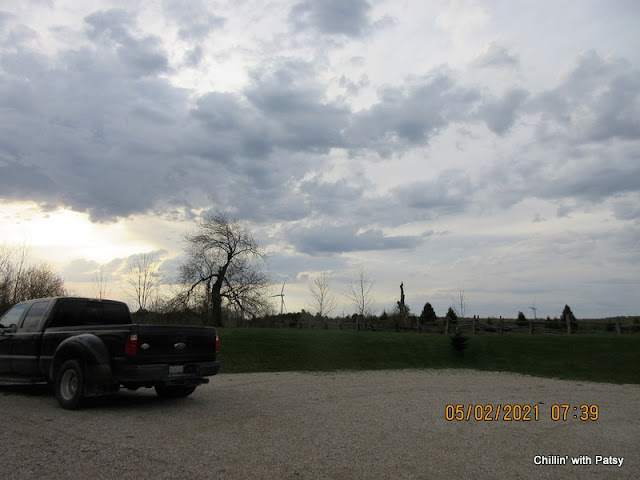 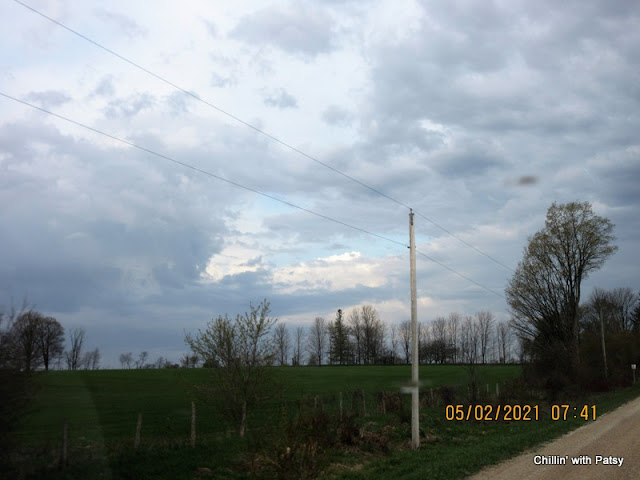 I was at the Mat by 8 and it was a pleasant, uneventful experience. I loaded the washer, noted that there were 3 in need of attention, 1 dryer had a coin stuck and the coin machine was empty. Dreading my next action only because of the early hour, I texted Jamie and apologized for bothering him so early on a Sunday. With a few minutes to spare, for me to fold our clothes, he showed up and set to work. They were all easy fixes and I think I’ve learned how to do one more thing, if I need to.

He paid me for the month of April and then proceeded to empty machines to refill the coins. That is a painstaking job with loonies and quarters going in their respected slots. He did it, not me. I just kept him company for an extra half hour, chatting about this, that and the other thing. I was on my way home shortly after 10 with cash in my back pocket. 😊 Bill was, not surprisingly, cutting the back field, the grass is growing fast. His new weekly chore now.

When I came in, I put my clothes away and when Bill joined me, we made the bed with clean sheets. It is easier with two of us, especially in a small space. I made my tea and went on the Norwex site to catch the latest and last video. Still waiting for the link on how to order. There are a lot of very cool products and I could easily see how one would spend a bag full of money. Maybe I’ll have to ‘host’ an online party myself to gain some rewards and to stretch out the spending. Be prepared, that means you may be invited!

While Bill was inside, the skies went from clouds, spatters of rain and some patches of blue. It was quite mild. He wanted to cut the front field so I began making bacon and eggs for lunch. Our blogger friend, Nancy, called and Bill gave her some information regarding water heaters and such. She’s a smart cookie and while I felt lost with his instructions, she seemed to be catching all of his tips. She wished us happy riding and said goodbye.

Bill went out after dishes and cut the field at the road. He didn’t have to help with cleaning up but always says ‘it’ll only take a couple of minutes’ so we got ‘em done together. I could feel the warmer temperatures moving in, a forecast high of 17C/66F today. Too bad it wasn’t a clear sky as we’d be out on Jazz ♪♪ again. Yup, name decided. 😊 I walked down to put some cards in the mail box for pick up tomorrow and noticed a great influx of bugs around my face. Oh-oh. The biters are back. Bill called out "we should be on the bike!" 🏍🏍🏍🏍🏍

A tip I’d heard, yet to give it a good try, was to spray the original Listerine on your face, and any bare body parts to keep mosquitoes, black flies (yah right) and no-see-ums at bay. I guess next time I walk the lane, or anywhere outside, that’s what I’ll have to do first. Especially on the warm days. We are always open to this type of suggestion but have yet to find any 100% resolve for black flies other than just covering ourselves from head to toe.

When Bill finished cutting, the mower joined Jazz ♪♪ in the shelter and just in time, again, as clouds moved over and dropped another brief shower. We’re still going for a drive this afternoon but it will be in Ptooties. It’s just nice to get out for a bit, so Bill hopped in the shower himself and we prepared to leave mid-afternoon. Just as we were pulling out of the lane, we saw a pick-up truck pulling in from the road. They had to stop to wait for the geese to cross. 😊

They backed up and we continued, rolling down our windows when we saw it was my oldest sister, Cathy and her hubby, Bill. They were just out for a drive as well. Daddy bred it in all of us, that 'gravel running' is a fun way to pass the time. A brief chat and they moseyed on and so did we. Taking back country roads, something we won’t do on the bike unless they’re paved, it was a nice drive. We’d considered finding someplace to get a bite to eat and that meant a Food Truck. There were two in Durham but not sure where else.

Neither one panned out and we were soon headed back home. I didn’t even take pictures, the skies were mostly uneventful, just dull and rainy. You’re not missing much. 😊 We had bbq’d burgers, devilled eggs, salad and shrimp for supper. It was very good, a nice summery meal. The rest of the day went well and before we know it, the weekend has passed. Not much on tv on Sunday nights so we watched a Hallmark movie, well, Bill watched it, and I dozed a fair bit. By 10 we were falling asleep so went to bed.

I’ve had to cancel an appointment for picking up my flowers from Owen Sound on Wednesday since we’ve had to accept an appointment with our lawyer in London on that day. He’s harder to nail down so I emailed VanVugt Greenhouses and they were quick in their response to change it to Thursday for me. I’ll be working for M tomorrow morning so unless that changes overnight, the work week will begin as per usual.

Another brother in law has a birthday today and my niece in Ilderton. Happy Birthday, John and Alaena! Hope your day was a good one!

Thank you for stopping in! Your comments are always welcome. I may be slow but I try to answer each one.

Posted by Patsy Irene (Chillin' with Patsy) at 6:08 AM