Starting with Sun on a Below Seasonal Day (Thursday's Late Post)

Thursday, May 27th Bill and I woke up at 5:30 or maybe a bit later than that. There was no sound from Gibbs last night when Bill put him into his crate at 10 and no sound yet this morning. It’s like a child, your heart misses a beat when something is ‘off’. Bill went down after he got dressed and by that time, the little boy was sitting at the door of his crate waiting. 😊

I say it a lot, but he is so good. After he went out for his business, Bill brought him up with Mom. On his leash, I was able to keep him contained with it looped over my hand. I hid my face (from the little nibbles) and rubbed his tummy to calm him. It only took a couple of minutes for him to realize that I wasn’t playing and he went to sleep next to me while Bill got washed and ready for work. We dozed until after 6:30 and I took him out again. There are always a few more drops to come out before I let him loose.

My only commitment today was to pop over to M’s and help get the front fender back on the old van that is in his shop. It wasn’t easy getting it off, some of the nuts and bolts are in very tight spots. I invented some new yoga moves then and will have to revisit them now! It shouldn’t take more than an hour. Since the guy from Toronto has cancelled, I won’t need to hang around. I did contact the next person who is interested in the saw and we’re communicating.

Gibbs is eating all of his food now, we are back to the Small size since the X-Small is gone. There doesn’t seem to be any hesitation so maybe he was just being fussy. He slept a lot yesterday after his shot but it didn’t interfere with his appetite. After each meal, so twice a day, he gets his teeth brushed but just with some plain Greek yogourt. Yes, I have to share my yogourt now because he loves it. He only gets about ¼ tsp. I've picked up a tube of pet toothpaste so he will get that delectable brushing 3X a week as recommended. I’m just glad to be able to get my fingers in his mouth.

We went out after he ate because he rang the bell and waited for me on the mat at the door. Later, he was in high spirits and raced around the main floor playing with his ball, Monkey, the crate doors, his empty food dish and my pant legs. He was wild. At one point, sitting in the ray of the sun, he sat staring at the window barking at it. Once the sun moved, after 5 minutes or so, he stopped and moved. 😊 He is so funny! 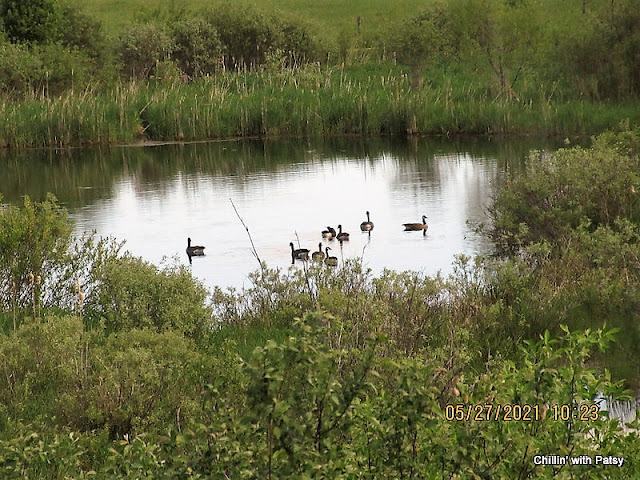 The two times we went out were for my purpose. I had to bury the goldfinch I’d found on the road the other day and then I had to go measure the length of the pole saw, with and without the extension. This person can’t come until tomorrow to look at it but that is fine, it will be afternoon and it’s possible Bill could be home. If not, when he texts for my address, I’ll go with the M plan again. I called M at 10 to update him and then made my coffee and did Gibbs’ teeth.

Somewhere in there, I had my shower and brushed my own teeth getting ready to leave before 11. I’d like to till the garden plots but I’ve never in my life started or worked a tiller. My arms are not very strong and even if I could do the first requirement, could I get it up the hill and hold onto it while working the new area? Now there’s a picture for ya! Reminds me of a movie with Bill Cosby on a treadmill for the first time. Ha ha Yup, that would be me!

At 11, I helped with the bolts on the van. It wasn’t even an hour and I was home. I’ll go back tomorrow and do some sanding on the van. We are only painting the bottom 18” on each side so hopefully a quick job. At home, I tried to start the tiller and that was just a laugh so I went up to the berm hill and weeded the small garden before going inside. I hadn't yet got Gibbs out of his crate, no point in having him running around while I’m focused.

After his piddle, we came inside and I called Grey Bruce Fleet to make an appointment for Ptooties' oil change. Time for lunch so I started pulling things out of the fridge. Gibbs rang his bell but didn’t hang around the door so I ignored him and he followed me. I thought he was just interested in the food until he piddled on the kitchen mat that I just washed yesterday. LOL I’m not winning here! This one is my fault and I should have reacted sooner and taken him out. The joys of training! 😊

This one was cute, afraid of the sun?

As I was eating at the table, he rang the bell again so this time, even though he scurried under my chair, I put him out on his rope leash. It is close to the Suite so he can go under there if he wants and he’s close enough for me to hear him. When I finished eating, I went out with him and let him run for a few minutes. I don’t want him to feel punished, he did all the right things. The Orioles yesterday ate the orange I put out already so put another one on the stick and filled their jam dish.

Taking an idea from what one of our friends did with their dog, when I was outside with Gibbs, I dug out a large empty water bottle from the recycle bin. At first, he was afraid of it and then when he realized the noise it made wouldn’t hurt him, he had a ball! It is almost as big as he is so I got quite a bit of entertainment in that half hour from watching him chase it around, toss it and run with it. 😊

We came in at tea time and I enjoyed a cuppa inside. No explanation necessary but Gibbs slept for an hour and a half. The sun had started to disappear behind clouds which meant the coolish temperatures were already dropping. When Bill came home at 4:30, Gibbs heard the truck and lifted his head from his sleep. That’s a first. I scooped him up from his 1 ½ hour sleep and took him out for a piddle. He was so excited to see Daddy that Bill’s boot got a few sprinkles. 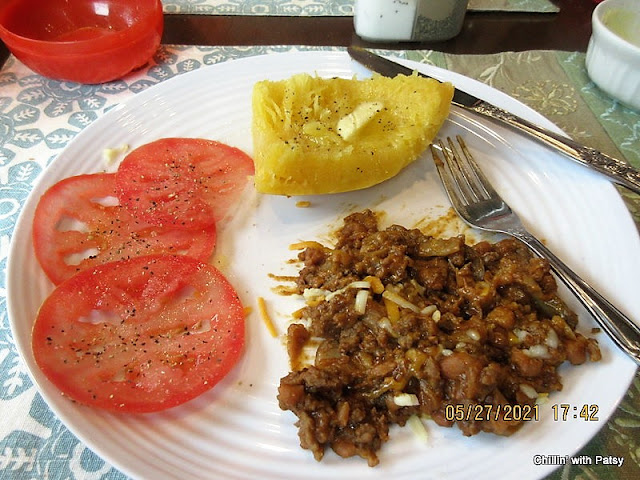 Bill had stopped at the Acreage to get a bladder full of water on the way home and topped up our tank. We watched some NCIS and then at 5:30 I started reheating the chili for supper. I had spaghetti squash with mine and Bill stuck to his toast. We had some crisp and whipped cream for dessert, did dishes and I took Gibbs out when he rang the bell. He was good and did both jobs. He loves the ‘treats’ he gets when he comes in and has sure learned that word.

We relaxed for the evening and when M texted to see if I could work 4 hours in the morning, I responded to that. I’ll stop at home to let Gibbs out for a piddle before going to the shop. That should be fine, he stays alone in his crate all night. This was a good day although I’m not keen on the chilly day. It only got to 11C/53F today and the wind sure didn't help. Tomorrow will be cooler still and then it will warm up again for Saturday. That will be nice for my walk.

Thank you for stopping by and thank you, Shirley and Ken! You know why.