On Monday, May 17th, the boys were up around 5:30 and Gibbs was out and took care of both jobs for his Daddy. When I woke up at a few minutes after 6 (?) Bill was crawling across the bed to kiss me goodbye. He had a bit of a drive this morning to Billy’s place. They had a few jobs in 3 different locations to do so they would be busy. All outside jobs so working in the heat.

I got called last night from my boss saying that I wasn’t needed today after all so instead of thinking ‘shucks, darn’, I am quite happy. It means the $$ isn’t coming in but I like to be home during Gibbs training mode too. We are trying to teach him to use the bell hanging on the door. It works for so many but I’m thinking it isn’t working so well for us. 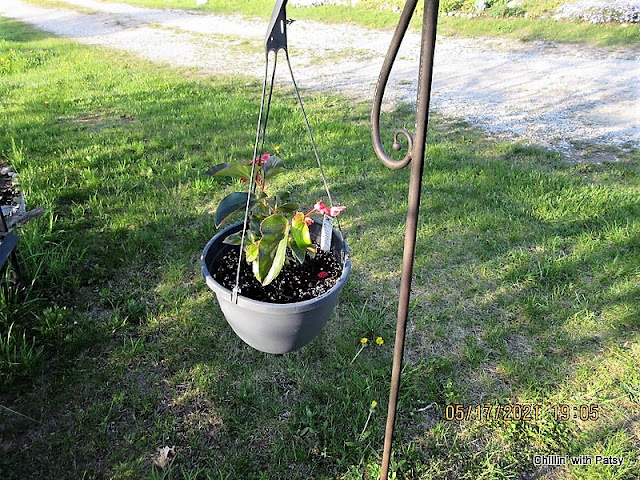 Each time we take him out, we make him touch the bell with his nose or paw. He has never really been interested in doing it at all but…….’they’ say stick with it and he’ll learn. Here we are, 10 days in and he hasn’t caught on. When we take him out, pretty regularly after he sleeps for an hour or so, he always does at least one job and we highly praise him. This morning, he is testing me, I think.

Twice, I took him out and he performed for me. Twice when we came in, he wandered and went to the bell, playing with it. ??? Now what? So, I took him right back out. The third time he did that, we’d just come in and I took him out and put him on his rope leash and I came in to finish eating my lunch. I watched him and there was no more ‘business’ being done. After 10 minutes he was just lying in the shade of the picnic table, I brought him in.

Who’s playing who here? Ha ha. After my lunch and a coffee at 10:30, we went out and I used the California duster to clean Ptooties off. She was so dusty! I also planted my Dragonwing Begonias in hanging pots and the 8 Dianthus plants on and around the corral hill. There are a lot of weeds growing in that garden now so I pulled a few out while trying to keep my balance. I hate that hill!! When I came in, I hopped in the shower while Gibbs slept under the table.

I was doing some research online for ear coverings for a small dog so we can soon take him on Jazz. The bike is quite loud, like a Harley even though it is a Yamaha, so we want to protect him. He’ll be riding in a ‘soon to purchase’ baby-type pouch in between us, unlike Clemson whose carryall fit on the back of our Goldwing. 😊 We’re not in a hurry to take him – yet, we kind of are. Ha ha.

I’m going out to test the Norwex Enviro and window cloths on the car windows. I’m hoping to give a good testimonial! It worked well on our stainless steel fridge so I don’t have to buy the special cloth for that. For my Canadian friends, get ready, I will be inviting you to my ‘virtual’ online party in June. Unfortunately, the Manitoba-based company doesn’t ship to the US. ☹ (maybe my American friends are saying ‘Phew!’).

So, I went out and washed the windows like I said. Inside and out and wiped them dry with the Window cloth. As far as I can tell, they worked perfectly! In the morning, driving in the sun will be a better test. Gibbs went out for a piddle at 2:30 and then I loaded him and the cheesecake and the card for M in Ptooties. We drove around the corner and finding the door locked, I could hear that he was inside painting. I hung the bag in the shade around the corner and left him a message.

When he called, he thanked me for the gifts and card. We chatted about his vaccine, scheduled for Wednesday before signing off. Gibbs and I relaxed for a couple of hours before Bill got home. I’d taken hamburger out of the freezer so decided on lasagna. We haven’t had it since we’ve come home and I was looking for something that would give us leftovers. This meal planning is so challenging!

It wasn’t ready until 6:30 but it was totally worth the wait. My lasagna never looks like the typical Italian entrée but it always tastes pretty good. We had our fill of that and then Chapman’s black cherry ice cream sure sounded good so we had a dish of it. Once more I just have to say “it is so creamy!” After dishes, Bill had his shower and made his lunch.

Gibbs was being a little brat (I can say that!) tonight before and during supper by nibbling at our toes but when he went and rang the bell, I took him out. He went piddle and poop almost immediately! All was forgiven. One look at that cute face and I’m done. We still need to teach him not to chew. The spray works well but on our toes?? This morning, I called the Durham vet and made an appointment for his 10-week vaccine. Then we’ll show him who’s boss. 😊 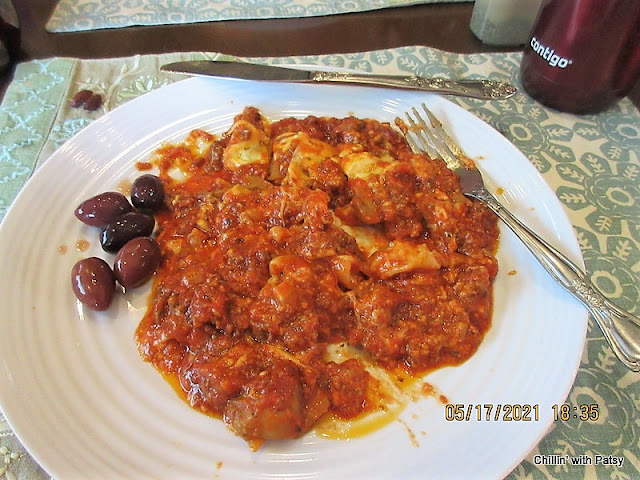 We watched 9-1-1 and 9-1-1 Lone Start this evening and listened to the chorus frogs outside our open windows. They haven’t been as bad this spring as they were last year but maybe it’s because our windows have been closed so far. This was a nice day off with the temperature reaching 22C/75F but it felt hotter than that with very little breeze. Bring it on! We’re ready.

And someone found their tail today

A couple of walks down the lane with Gibbs on my heels and I’d say we got our exercise today after all. I hope you’re enjoying the warm weather too!

Thank you for popping in. Your comments are always appreciated. 😊

Posted by Patsy Irene (Chillin' with Patsy) at 8:13 PM