On Friday, May 14th, we were up and at ‘em at 6 and 6:15. Bill was up at 5 and let Gibbs out and then put him back in his crate for the hour. Outside was looking to be pretty darn nice again with clear blue skies and a temperature of 6C/44F. We knew it was forecasted to reach 19C/70F. Woohoo! Hoping they’re right, we went about our day.

Bill left Gibbs and I home and went to Hanover to work at Donna and Gerry’s with Billy and Mike. They were extending their back deck by a few feet. I left the house at 7:15 as well to clean the Mat and was back home again by 8:30 or so. It was in pretty good condition with no unwelcome or otherwise surprises. 😊 I let Gibbs out of his crate and he did his business outside and played a bit before returning indoors. 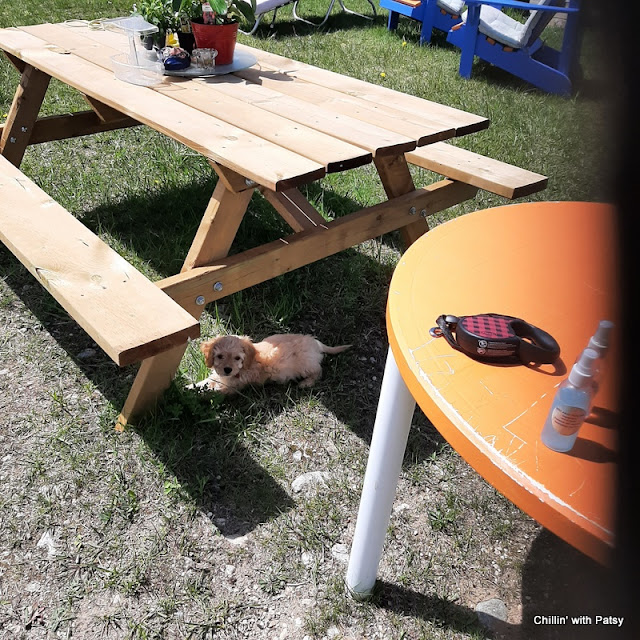 I noticed when we were out that although quite warm, the black flies were back. We’d all hoped the freezing, thawing, freezing, thawing had killed them all but no such luck. Silly to even hope that! I had two options for spray and after trying the Listerine yesterday (and it worked) leaving me sticky afterwards, I tried my girlfriend’s Pest Away which I purchased a year (or two?) ago. It seems to be working too, smells nice and no residue on my skin.

Gibbs ate his whole dish full of food and when we went outside an hour later, it was just playtime and the odd piddles. We can’t read their minds can we? I put his retractable leash on and he wouldn’t move, in fact chose to lay down and roll instead of joining me down the hill. What a goof! I picked him up and we walked to the mail box to post a birthday card. On the way back up the hill, I tried him again and he walked a bit as long as the leash is loose and it’s on his terms. 😊

I wanted to fill bird feeders and I have fears of him going under the Bunky at the doorway so put him on the long leash/rope. He didn’t seem to mind and I went about my business. We were out for a good hour before coming back inside for a coffee and he ran for the water dish. I’ll have to get one for outside for him. He was content to sleep in his bed or on the carpet under the table so I took a chance and left him to it, hoping not to return to an oh-oh.

I hung the Geese Crossing sign down at the head of the lane, then got my bucket of garden ornamentals and hummingbird feeders out. Wow! I didn’t realize there were so many. However, I found suitable places for each one with the exception of 2 or 3 that can be thrown out, they are so old. There are memories attached to a few that I will keep putting out, just because I can. Just around noon M called and asked if I would run an errand for him to Hanover.

I had some of my soup for lunch and finished putting my stuff around the property. I didn’t have to head out until around 2 and only if M had stuff lined up for me. Just as I came inside, I heard $125 go out the window. Well, not literally but almost. A gust of wind came out of nowhere and blew the King chairs over with our new umbrella. Of course, one of the ribs snapped in 3 pieces! ☹ I felt the tears as I ran over to pick it up but it was no use.

Now, we have a beautiful lopsided orange shade umbrella. Crap! It’s my fault. I should have waited until Bill drilled a hole in the picnic table for it but I was over-anxious and used what we had. I won’t buy another, at least not new. I hopped on my bike to see if things were working on it, and other than the brakes being stiff, I rode down and back without any issue. I actually made it up the steep hill for the first time. I guess anger gives me strength I didn’t know I had. LOL

The clouds started rolling in around 1:30 which sure made a change in temperature. The sun is our heat, no wonder when it returns, we all run out to savour it. Bill called at 1:35 and said he was on his way home. Then M called back and said that the paint product I was to pick up would not be ready until 4:30 and they closed at 5. Nope, it wasn’t going to happen today. I was just as glad since Bill and I had some running around to do.

We drove to Murray’s, where we store our car for the winter, and picked up a new to us 2013 Cub Cadet riding mower on his trailer. Bill has a C.C. that is a 2011 that Murray will take as a trade in. He is very handy and his hobby is buying, fixing and selling machinery, cars etc. Bill was very happy to settle a deal and bring a more reliable mower home. It also has a 54” cut compared to 42” on his old one. Yup, happy hubby. 😊

After dropping it off at home, Bill took the trailer to Gerry’s in Hanover and brought his scooter to the Acreage and then back here to pick up the trade-in for Murray.

He dropped Gerry at Murray’s where Donna picked him up and he was home for supper around 7ish. He’s had an incredibly busy day. I’d cut up the last 3 potatoes for homemade fries in the Fry Daddy and had Basa filets for supper. They were great!

For dessert, we had cookie cheesecake squares and saved the pie for tomorrow night. I sent Bill out to do what he needed to do, aka put the ‘new’ mower in the shelter and I did the dishes. It was no surprise that when he said “I might cut a wee bit to see how it is”, he meant “I’m going to cut the berm, see you in 15 min.” Ha ha. I was watching vet programs when he came home so just left them on while he cut. Something about the animals has me mesmerized. 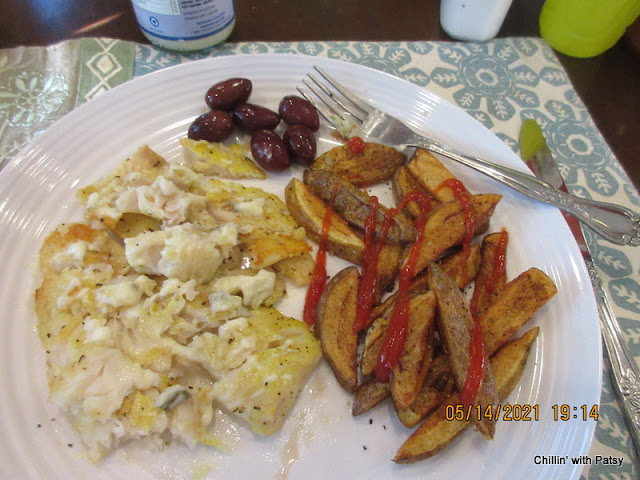 It will be a slow, relaxing evening. At 8:15 I’m already feeling a tremendous slide into restfulness. 😊 This was a busy day for both of us in different ways but we have a weekend ahead of us to do whatever we want. Friday’s are still pretty special. However, the sun set in a cloudless sky so nothing special there. Then I looked again so snapped a couple of pictures. The great news is that we had SUN!!

Posted by Patsy Irene (Chillin' with Patsy) at 6:56 AM