Catching Up on Yesterday

Saturday, Oct. 2nd and we were up around 7. At 8, Bill nipped into Durham and got our propane tank filled at FS. Thank goodness they were open today! We weren’t in dire straits but know enough to fill one as soon as possible after one is empty. It is handy to have two. That goes for our 5-gallon water jugs too. When he returned, Gibbs and I were ready and we loaded into Ptooties for our day to the city of London.

It was Bill’s FCF (Forest City Flyers) meeting at the club field and he doesn't always get to go. Mid-week, I’d said that if it was going to be a decent day, Gibbs and I would go along and then we could make a stop at Costco before coming home.

We arrived around 11 so did the grocery run first. Bill is the best Costco shopper when you are on a time schedule, so Gibbs and I wandered around in the front corner of the lot where there was shade and grass. 😊

Within 20 minutes, he was back and loaded the few food items (some‘special, preferred’ things that we can only buy (bulk) at these stores). I took a turn and nipped in to use their washroom.

We stopped at the Mcdonald’s across the highway and picked up lunch to eat at the field. Their fries are not what they used to be but it hit the spot. There were a few flyers there already, most I didn’t know but it was nice to see Chris and Gary, friends we’ve known for years. Their wives weren’t present but it was still nice seeing and chatting briefly with them.

Then, it was nicer still to see Keith and Oreo drive up in his classy black Mustang. The meeting took place over by the pergola shelters so Gibbs and I walked out the laneway and then sat on the Afghan in the shade by our SUV.

He and Oreo touched noses in greeting but being the over-anxious little guy he is, he got a 'back-off' growl and a warning from her a couple of times. When the 1 pm meeting was done, Bill said his goodbyes and we left for home, grateful we’d shopped first. 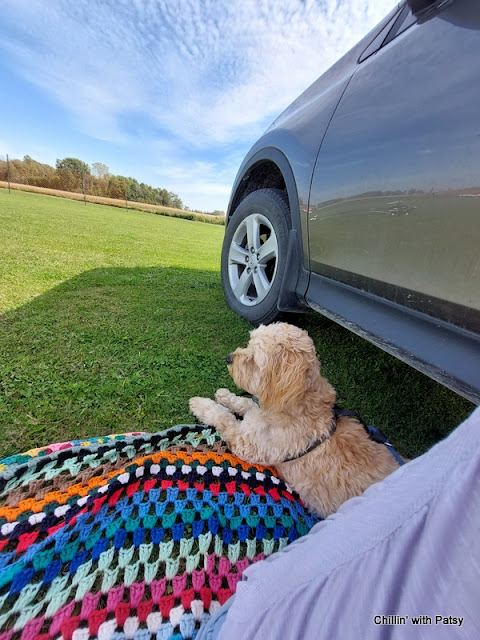 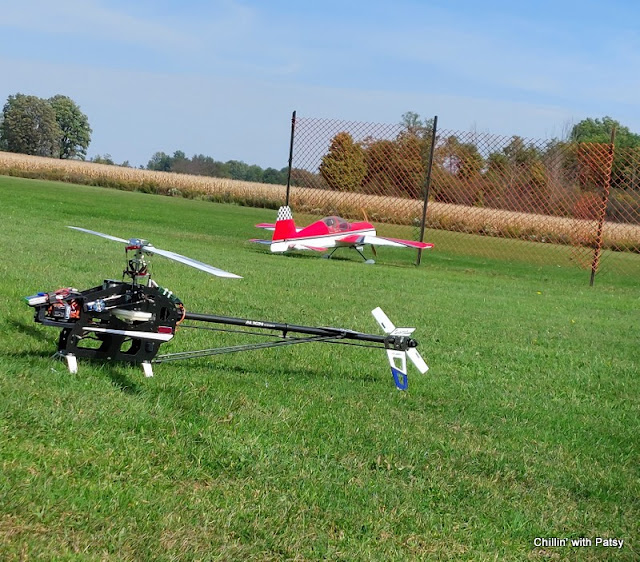 The drive home was uneventful and we were both pleased with the way the day turned out. Plus, the weather was awesome! The thermometer in Ptooties was reading 25C/77F when we stopped at Milverton to switch drivers.

Gibbs doesn’t have his license so that left me to get us the last 75km trek home. 😊 It was a good time since my left leg was starting to ache from just sitting. It needed a job. I pulled into the Pioneer gas station in Durham to fuel up and arrived at the Ridge around 4:30. Good timing and a good trip.

Gibbs was kapooped and crashed on the floor before we decided to warm up the lasagna for supper at 6. Donna and Gerry were having their ‘maybe last seasonal fire’ so after dishes, we drove over to join them and Mike.

It was a lovely evening, 18C/64F and we had no biters and no wind until almost 9:30 when we came home. Bill watched some tv but I couldn’t keep my eyes open to even read so went up to bed with Gibbs. Bill was tired too and right on our heels.

The book I'm reading is a digital one that I borrowed from the library (Libby) called Nomadland. Perhaps I’ve told you this already. My daughter recommended it and although I’m not ‘hooked’ on it yet, I’m enjoying it. How cool it is to hear Bullhead City, AZ mentioned, one of our favourite resorts when we’re up that way. 😊 It was a nice day and evening.

Posted by Patsy Irene (Chillin' with Patsy) at 2:26 PM