It’s Been a Go-Go-Go Day

On Thursday, Oct. 21st I woke up when Bill brought Gibbs back to bed. I must have been deep in a sleep again, never heard him get up earlier. Having the cone on for sleeping doesn’t seem to be too much of a hardship for the little pup but he does get anxious when we start taking it off for him to eat. Some dogs can manage it around their dishes but it didn’t seem like Gibbs was getting the hang of it.

It was raining, not heavy but pretty steady so Bill returned to lay with us for a while. He wouldn’t be working this morning at least. I got up around 7 since it was a cleaning day for me. I was pleased that Bill was home so I didn’t have to take Gibbs in the car again. The Mat was in fair condition, just normal cleaning was necessary. It surprised me that nothing on the door lock had been touched since Tuesday. Wonders never cease!

After damp mopping the floor, I headed home. Bill and Gibbs were in his recliner and the little guy had been good without the cone. 😊 I sat and made my tea while conversing with my sisters on Messenger. Bill went out and began changing the oil on Jazz, getting her ready for winter storage. Thankfully, Murray has room for us to store her there with Ptooties. Like a family affair.

I took the opportunity while Bill was outside to vacuum the Suite. It has been a few days, tsk tsk. Gibbs thinks it is a game, where Clemson just knew to get up on the couch out of the way, Gibbs runs in front and at it with my back-and-forth motion. He makes me laugh and he seems relieved when I put the ‘floor monster’ back under the bed.

Then at noon we went out to see what Daddy was up to. I had a brain wave, that since Bill wasn’t working, and it was our last mild day, we should be taking Jazz over today to Murray’s. Bill thought it was a great idea so Gibbs and I went for a walk while he cleaned up and leathered up. 😊 Picture that if you will! It was windy but the 17C/62F would make for a nice ride. And it did. I wish I’d been on the bike for a last one too.

Gibbs and I followed in Ptooties and after covering the bike we returned home. It was 2:15 and we realized we hadn’t eaten lunch. Woops! Bill had had cereal at 6:30 and I had some yogourt after returning from town but who wanted to eat at that time of day? Well, we needed something so we had some cheese to fill the small hole of hunger. This afternoon, we got a lot more stuff put away. Things removed from the front yard and Bill did the last lawn cutting in that area. It looks very bare out there now!

We have things yet to store away and others to cover. Once we’re done in the storage shed, we can put the riding mower away and take the shelter cover off. My wagon went inside the outhouse so I pulled the toilet paper off the roll and stored it in the cupboard since we can’t use that anymore. Our motorcycle gear all went into the Bunky as it is insulated and we have never had critters in there. Again, I hope I haven’t spoke out of turn and jinxed something! 😊

I made a tea inside and wrapped the ‘auction Angels’ I got way back last winter. I’ve chosen a few special people to receive them according to their birthdays, since they are labelled for every month of the year. Silly, maybe, but also something I want to do so it doesn’t matter.

Bill and Gibbs both snoozed, Gibbs in various places and Bill in his chair. The wind has calmed somewhat and we have not received any more rain since this morning.

That all changed at suppertime. Just before I started reheating our leftover spaghetti, I noticed rain on the window. Here it comes. As things heated, it became heavy and the television went haywire off and on.

Supper was very good and I was surprised that there was enough leftover for both of us. I’d mixed up some chocolate mousse for dessert and even test out the new Pampered Chef whipped cream maker I’d purchased. 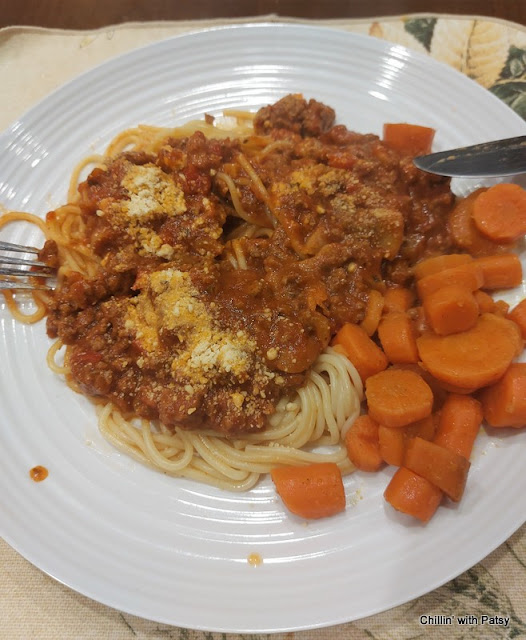 Well, that was quite the experience! Ha ha. I’m sure the next time mixing up a batch of whipped cream with it will be an improvement. My main disappointment was not being able to lick beaters but my main joy from using it was that I didn’t have to get the mixer and beaters out! It worked well though and I’m happy with the purchase. 😉 After dishes and Gibbs had eaten, he had to go out. Bill and he got quite wet, his timing is impeccable. (sarcasm)

This was a good day, I feel a lot got taken care of again. Pictures tomorrow, once it stops raining, of how our front lawn looks.

Thank you for the drop in!