On Tuesday, Oct. 12th I didn’t hear Bill get up but he said he was up and had a shower. I’m unaware if it was before he took Gibbs out or after. I did feel a lug of a puppy flop on my chest and lick my face just before 7. Well, good morning to you too! 😊 I didn’t have to get up to clean today but got up to say goodbye to Bill.

I felt sad that he had to return to work but he seemed content enough as he headed off at 7:30. I fed Gibbs. Oh! The little bum is 7 months old today so that means his food gets cut back by ¼ cup I think. Anyway, Bill told me the size to give him according to his food bag and that’s what he got. He is certainly getting enough to eat and after seeing the little porker, Pepper, on Sunday, we want to do the right thing to contain his weight. I know one thing for sure; our little cuddle bum is growing up and has made huge improvements.

It looked like a nice morning, although quite windy, so I harnessed the birthday boy up and we went for a walk. It has been a long time but he did really well. 😊 As we approached the ‘dogville’ house at the corner, we saw young Ivy outside waiting for the bus. Gibbs slowed down, very timid. She had her mask on and a hat so was unfamiliar to him. Also, he doesn’t forget the barkers. They were in the house but at the upper window with muffled barks.

I asked Ivy if she wanted to pet Gibbs because she had expressed interest another day from a distance. “I love your puppy!” Of course, she said yes. Besides the big dogs, she has 2 goats in a shed out the back of their property. I’d say she’s an animal lover. 😊 Gibbs only approached her once she slipped her mask down and then lay down for a tummy rub. As I left, wishing her a good day at school, she thanked me for letting her pet Gibbs.

Not far down Baptist Church Road, Gibbs met more new people. Rob and Bethany met us in front of M’s house and crossed over to meet/greet him. He was pretty good, wanting attention but jumping which we’re trying to curtail. Rob helped as well by giving the command to stay down/sit before he pet him. We’re getting there but it is a slow process for that and the barking.

They were interested and concerned in whether we’d figured anything out for the winter so were relieved to hear our ‘tentative’ news. They are also experiencing some challenges and gouging as they are moving to New Brunswick on Nov. 1st. There will be a new pastor coming into their current house. Finding a reasonably priced shipper is not easy for them either. ☹ Over half of a year’s salary is what it will cost to have their belongings out there.

Even renting and driving a UHaul and pulling their small car is exorbitant in cost. Four years ago, when they moved here, it was ¼ of the quoted cost. In this life, we can never think that we are the only ones with difficulties, we all have our share and that evens things out. I wished them luck with their search and Gibbs and I carried on all the way to Turbine Lane. It was a really nice walk and he occasionally veered off into the leaves. I think he liked the sound.

When we got back, I had my tea and read more Willie letters. With the day being as warm as it was (18C/64F) and as warm as it was going to be (21C/70F) I thought I should get out to the front of the property and trim the lilies. We have forecasted rain on and off over the next week so today was the best day. Not wanting to leave Gibbs inside, I took his nylon tether with his leash and ‘we’ pulled my wagon down with the tools I’d need.

I never mind the job once I start and moved back and forth between the winter geraniums cutting the lilies off at the base. Grass was persistent in growing up in the geraniums so that was the hardest challenge. I had to keep Gibbs at a distance (learned after the first 10 minutes) as he just wanted to grab every handful of clippings. What a character! He then behaved from a distance, watching Mom. I worked on both sides of the fence and then across the lane trying to get that area trimmed up from the bullrushes/cattails.

It probably took me an hour and a half and I was dragging by the time ‘we’ pulled the overloaded wagon up the lane. I’ll dump it later but I could almost feel rain in the air. That means we finished in good time. I was dragging because I hadn’t eaten anything other than some yogourt so when I got back inside, I warmed up the last half of my breakfast quesadilla with some cheese on the side. Yum.

Gibbs was tired out but kept running from one window to the next when the thunder started. He wasn’t afraid of it, he just thought there was something outside that he should be able to see – and control. 😊 The thunder started before the rain and also some very sharp jagged streaks of lightning off in the north sky. I wasn’t surprised when Bill pulled in the lane. They wouldn’t be able to continue laying the metal roof sheeting in the rain and at least they got half a day’s work in.

Bill had received the email from the shipping company we have been conferring with so another step towards ‘revival’! 😊 Just kidding but we are indeed getting somewhere. I finished my book while Bill and Gibbs snoozed and then he got cleaned up to go into town. Time for a new piece of clothing. We had success and after stopping at the post office to re-send a birthday card that needed more postage because of the size (duh!), we arrived home before the heavy rain hit.

Today is our future son-in-law’s birthday so now I know his card didn’t arrive on time. I messaged him so he knows that we thought of him ahead of time. ♥ We each had a cup of tea and grumbled at the wet weather as it could put a damper (hahahaha) on tomorrow’s work for Bill. Not much we can do but grumble so we did. “Rain rain go away….”

For supper, I had pulled steak out of the freezer. We wouldn’t be barbecuing so I decided to focus on finding an Instant Pot recipe. With leftover mashed potatoes, dressing and the ‘dreaded’ carrots (figure of speech only) that I brought home from Sunday’s meal, it would be a good supper for a rainy day. And it was!! The steak looked small but once cut up on our plates, they were just the right amount. Everything tasted great, finished off with another piece of cherry pie.

After dishes, Gibbs ate and he and I went out in the semi-dark. It was only 7 o’clock and with those heavy clouds, it would soon be pitch black outside. It felt mild and by the looks of a couple of the black clouds, we would be getting more rainfall overnight. One cloud in particular looked quite ominous. There were a few puddles up top where we park but that just indicates heavy rain. ☹

The rest of the evening was focused on my blog and watching some of our regular programs. This has been a great day and I’m so glad to finally have that clipping done down at the road. All I have left are digging up the bulbs once my dahlias have stopped flowering. I hope your long weekend was wonderful and that the new week is starting out to be a good one too. 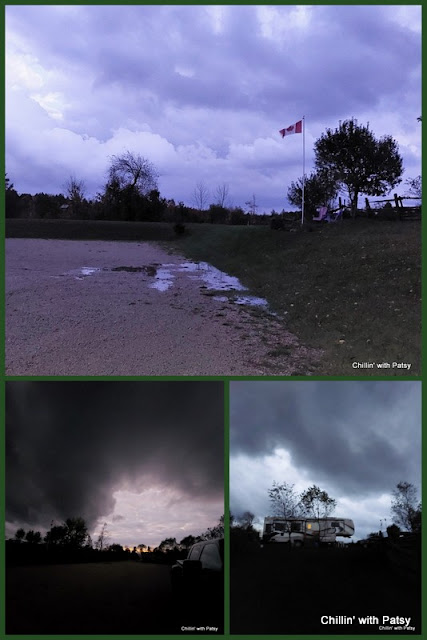 Note: just when we thought we were on the right track, another worry popped up. Well, we have been concerned about our mixed Pfizer and Moderna vaccines for a while, about them being an issue at the border no matter how we go. The CTV news only added to our concern making us feel that we’ve taken 3 steps forward and 2 back. ☹ Our saga continues.