Getting Pretty Good at Painting

On Monday, Oct. 4th I heard Bill get up at 6 because I was awake at 5:30 for some reason. Slept out, apparently. Bill left at 6:45 today because the crane was coming around 7:30 to the job site. It will lift the roof into place. We knew it had rained through the night but we couldn't tell how much. As long as it didn’t make it impossible to get the crane in. There was a slight wind too.

I didn’t have to go anywhere until 10 and that, too, depended on the weather. M called around 9 and plans might have changed. Because the Bronco was outside, I wouldn’t be sanding it today if it rains. The forecast was for a chance of rain off and on all day. I still went over, leaving Gibbs on his own, and painted a second coat on the chair before moving inside. There were lots of small improvement jobs to do on his place and he appreciated the help.

There are 4 more inside doors in his maze of a house and both sides of each needed to be washed, sanded and painted. While M went about his own business, running errands and working on his mower etc. I managed to get one door ready for paint. At noon, I returned home for some Leek soup and to walk Gibbs and then went back to work for 12:30. The day zipped along pretty good and I had finished 2 of the doors by 3 pm when he paid me and I drove home.

It had rained enough that it was a good thing I didn’t try to do anything out-of-doors. Gibbs and I took a walk down the lane to get the mail since I’d noticed the flag was up and he needed to get some exercise. He was walking good so we went further down North Line to the east until he stopped and turned around. 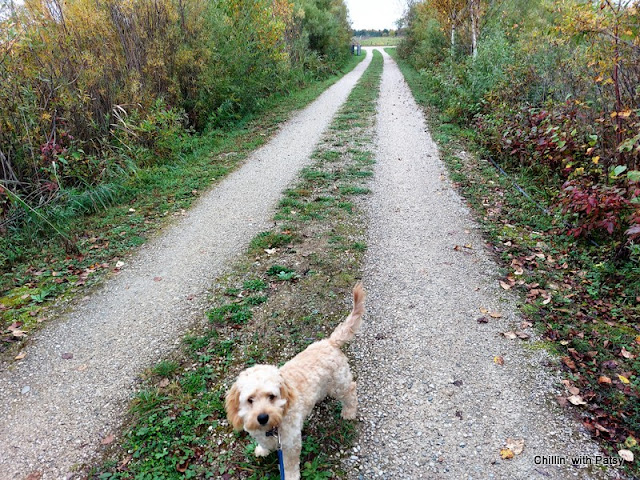 Don't kid yourself, he has a mind of his own. He had 2 stints of 2 – 2 ½ hours with nary an issue so deserved some freedom. He goes up onto the bed now after eating his small treat and sleeps until we return. It is a place where he can look out the windows and see us come and go. 😊

Bill got home at his usual time, shortly after 4, and we drove into Jamie’s to pick up the hasp and padlock from Cheryl. I knew Bill was tired, as was I, but he was able to get into the toilet tank to flush it. Disgusting! He’s a brave soul. Then he installed the hasp and lock before taping my sign to the door. I’m sure it won’t last long but the padlock is a good solid one at least, difficult to break off. (We hope). I was beginning to feel relief already that at least no one could get in to do damage any more. Yay!

I noticed one washer not working, another one leaking and 2 dryers with signs on them. Bill and I drove home and when I’m in to clean in the morning, I’ll leave a key for Jamie for the new lock and give the bathroom/toilet a good cleaning. I forgot my lock up keys when we went. Duh! For supper I’d planned sausage but really don’t feel like preparing it so Bill was happy with grilled cheese sandwiches tonight. I'm forever grateful that he is so easy going when it comes to 'slack off' meals.😊

He had a couple and I had one with onions and one of Gayle’s small garden tomatoes on the side. We both had some dill pickles. Bill had a cupcake and I had an ice cream cone for dessert. That all hit the spot. It was the night for our tv programs and yet we were both so tired that it was a fight to keep our eyes open. We watched 9-1-1, recorded the Voice, NCIS, recording Ordinary Joe and then when NCIS – Hawaii came on, we watched about 20 minutes and both went to bed. I’m not that into it and obviously Bill isn’t either.

It was a busy day and although not a hard day for me, the challenges that come with washing, sanding and painting installed doors (bending and squatting) are tough enough on this old body. 😊 I enjoyed it though and $$ in the pocket is always a great way to finish a job.

Thank you for your visit. Your comments, as always, are welcome.

Posted by Patsy Irene (Chillin' with Patsy) at 9:11 AM

Email ThisBlogThis!Share to TwitterShare to FacebookShare to Pinterest
Labels: painting on the job
Location: Priceville, ON N0C 1K0, Canada