Tuesday, Oct. 5th we were up at our normal times. Bill first, then Gibbs and I followed before he left at 7:30. I wasn’t dressed enough to take Gibbs out to say goodbye so the little guy hopped up on the bed (now he shows off!) and looked out the window. I snapped a picture of Bill going down the road with the trailer. It was so dull out there that it almost seemed earlier.

Things were dry, at least, and not too cold. I fed the pooch, took him out once more and drove to Durham. I could feel that I was feeling much better about the situation (it) in there. Just knowing that I wouldn’t find a mess in the washroom is making a huge difference in how I feel. Jamie had left my September pay in the lock box and with only one customer in there at that time, I unlocked the bathroom and cleaned it. 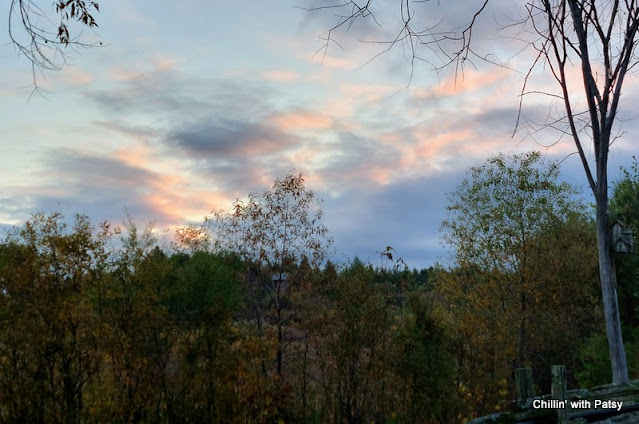 Now that it is only me that will use it, the process of cleaning it is better. I’m not saying I wasn’t cleaning it well before, but now, when I make the extra effort, it will be the same way when I return. I slipped the broken handle off and after sweeping the floor, locked it up again. After finishing the whole place, I drove to Home Hardware, the back way *, to see if Josh had a handle that would work. He has quite a few in stock but we didn’t know which one would fit so I’ll go back with more detail. 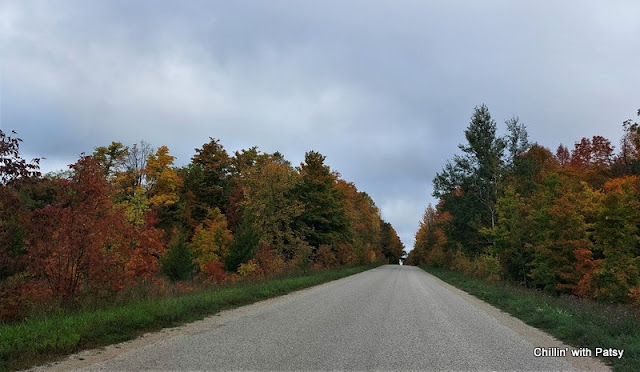 I mentioned *the back way above; the main street in Durham (Garafraxa) is closed between the laundromat street and Tim Horton’s for some boxed culvert replacement. It is easy enough to get around using the detour on either side and it isn’t a long stretch that is closed to traffic. There are quite a few improvements being made in town, store fronts, the culvert and next year the bridge. 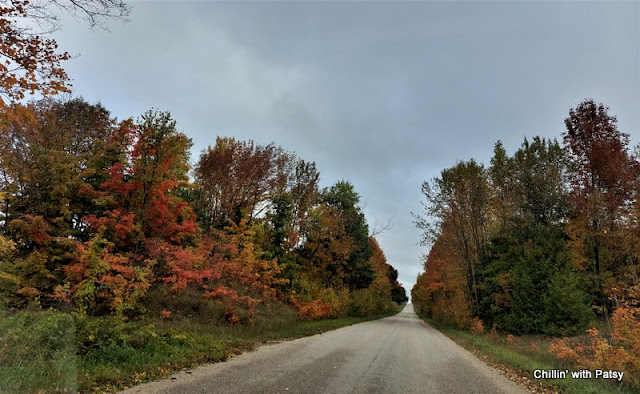 Admiring the beauty of Autumn’s dresses, I drove home and because Bill had forgot his coffee mug (yup, again), I made it and Gibbs and drove to the work site. 😊 We don’t mind, I get to see the progress for myself rather than just in pictures.

Back home, I made my own cup of tea and was ready for it. It’s not as if I had to have it, no headache or anything, but I do enjoy my first hot drink. Last night, just before supper, I did have a headache. I figured it was from the paint fumes in an enclosed area. It was gone by bedtime with a couple of Advil. 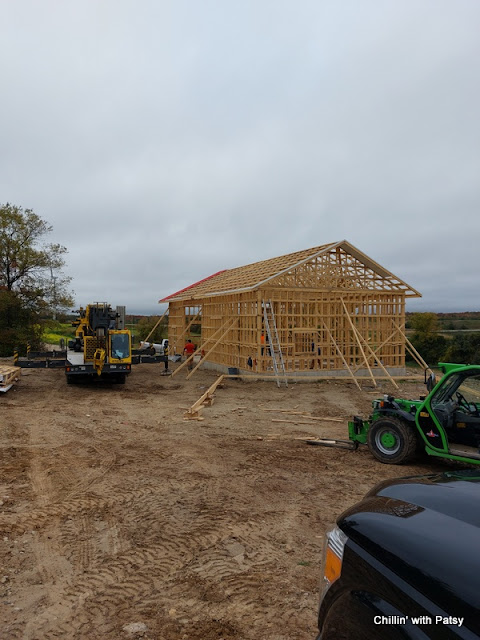 Today, there wasn’t anything else on my plate so I decided to bake. I heard on the radio that in some circles, it is Apple Betty Day. You know, apple brown Betty, apple crisp, apple crumble or whatever you call it? Perfect! I had some of our apples in the freezer from two years ago so it is a good thing to eat them up. So, I made a batch of half keto/half normal Apple Crisp for desserts. I didn’t bake it until closer to supper. 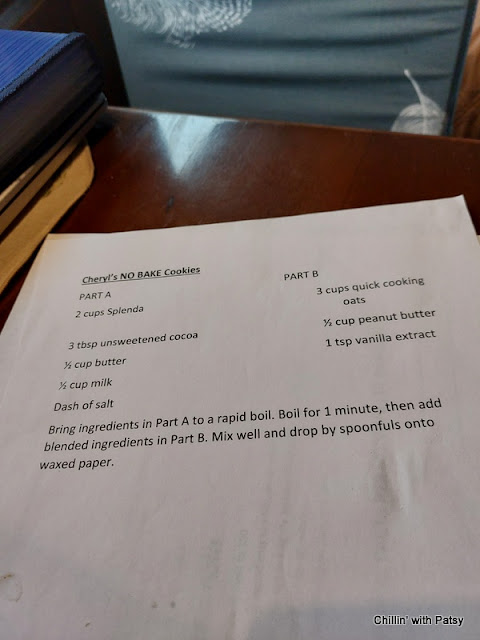 With that made, I searched through some of the recipes I’d gathered and came across this one from our rv’ing friend, Cheryl. http://ourawesomeviewfromhere.blogspot.com. I don’t think her recipe called for Splenda but since I don’t bake with sugar, I substituted it on paper and in the mix. 😊 Gibbs spent over an hour outside on his tether, no interest in coming in at all. It wasn’t cold and he was happy (surprisingly not digging!) so it worked well as I baked. 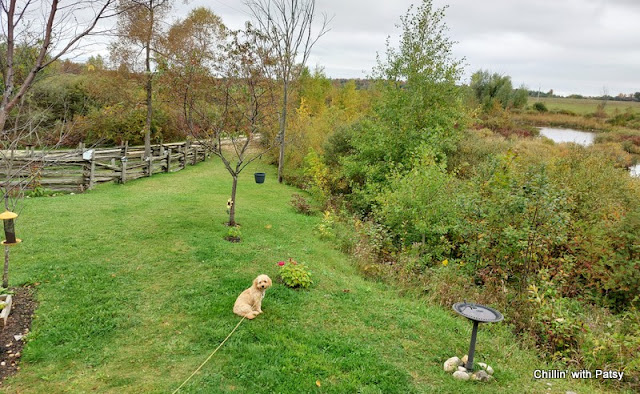 Once he came in, around 2:30, he went up to the bedroom and slept. Just like Clemson in my picture from yesterday’s blog post. ♥ I started my post for today and then sat in my recliner with my book. It is on a loan, so need to keep at it before time runs out. Bill came in around 4 and we sat together and chatted about our day. For supper, I had Rosy air fry 2 sausages and that was a great way to cook them with them ending up with a bbq result.

On the stove, I made mac & cheese and corn for our sides. The apple crisp was baking in the oven and that was our dessert. Yummy, it was sweet but delicious. I used Splenda and almond flour along with the oatmeal but had to use regular brown sugar. I told Bill that we would probably experience a sugar high tonight. 😊

After dishes, of which there seemed to be a lot, Gibbs was fed and I took him out. It was only 7:20 and already, starting to get dark. The clouds didn’t help.

Today was a day of clouds, although they had originally promised some sun this afternoon. It wasn’t cold but it felt dampish all day. Again, I say it; what strange weather! We never really know what we’ll get until it happens. I hope your day brought good weather and if you were working outside, only a dry day.

Posted by Patsy Irene (Chillin' with Patsy) at 7:11 AM