Morning Coffee with my Sis, Shopping in Quartzsite, Already!

On Wednesday, Nov. 24th we woke fairly early. Up before the sun for sure, which joined us after 7 am. We had our tea and coffee while sitting at our laptops and, as I made them, listened to the beep, beep, beep of our inverter telling me that the Keurig was using more power than what our batteries had stored up. I don’t fret about it the way I used to; they’ll bounce back. And they did. 😊

It was looking like a beautiful morning so I went out to capture the rising sun. I even focused on a panorama picture as I made a full body circle out in front of the Suite. I was expecting a spectacular photo but instead ended up with this nice one.

I didn’t tell you about the mishap with our bathroom door so I will now. Lessons we learn on this journey.

At one of our stops, I don’t recall if it was for the night or just a rest stop, I used the bathroom and closed the door which opens out into the hallway. The door has to be closed because the large bed/hall closet slide closes against that wall with the door. There has been an issue with the bathroom door, on occasion, the latch not catching. This time, it didn’t and I neglected to look over my shoulder to check. At our front door is the panel where we push the button to close slides.

You can’t see the slide come in for this one while holding the button. It was almost halfway in when I heard a crunch and took my finger off the button immediate. Yup, you guessed it. The door had come open and slide met door which pulled the bottom hinge partway out as well as some of the door jam. It took a kick at the hinge to get it back partially in place to close the door tight and carry on. There were a few expletives, I have to admit, this one was my fault. Crap!

Bill knew it would be an easy fix. First, he went into town with our Blue Flame heater to see if RV Lifestyles could fix it within the week that we’re here. He also had some other stops to make and returned disappointed that Herb’s Hardware, a popular spot for the guys, was permanently closed. ☹ He left the heater, pleased that Dennis said he could do it today. Yay! Back home, he discovered that he had the proper screws and took care of the door pretty quickly and easily.

While he was gone, Gibbs and I sat outside with Gayle. A morning ‘happy hour’, just us 3. ♥ We had some breakfast, bacon and eggs, around 9:30 and Bill kept himself busy fixing our towel bar which hangs over the above-mentioned door. He cut the hooks off and screwed it directly on, assuming that has been the issue with the closing. Or at least part of it. When I answered the phone from Dennis, we got cleaned up and went into town to pick up our heater and do some shopping.

The heater just needed a really good cleaning, some parts that Bill couldn’t get to obviously, and all for a mere $30. So worth it. Those guys at RV Lifestyles are THE best. 😊 Such great service. Then we walked the strip of Quartzsite that had some vendors who were open for business. It seemed very dead but we wandered, separately, into some of our favourite places. I’ve wanted to replace my knock-off crocs so found a pair I liked plus a couple of Jasper stone bracelets. It was hard to choose but I loved the colours.

Back home, Bill climbed up on the roof to tilt our solar panels in the wind. We aren’t exactly facing the proper direction to get the best out of our panels, didn’t think that through when we parked but for a week, we’ll manage.

I visited over at Gayle’s, her friend, Judy, who is from Alberta and parked across the road was there and it has been a while since we’ve seen them. Gibbs was very good over on our patio mat, we’re working on the barking, and I could hear other dogs barking but he was mostly quiet. Good dog!

The wind just vamped up and the dust along with it, so we came inside when Bill finished and I made a tea. We know about the winds here but it hasn’t discouraged us from coming here yet. It isn’t always this windy so we roll with the punches. 😊 We’d planned on grilling burgers tonight and despite the gusts blowing from the NW, mostly, he had success and we were eating by 5:30. We missed Happy Hour today – with anyone – because of the winds. Tomorrow!

Supper was great, just a cheeseburger, loaded. This afternoon, I pulled the bag of UNsalted pistachios out of the cupboard. I bought them by mistake, I wanted salted, so read up on how to salt them. They are still in shells so I boiled them in salty brine and then baked them on a cookie sheet on the Weber for 15 minutes. Oh my, that worked like a charm so I’d been munching on them on and off this afternoon. They are loaded in nutrition, a bit too many carbs but high in other things too. ♥ 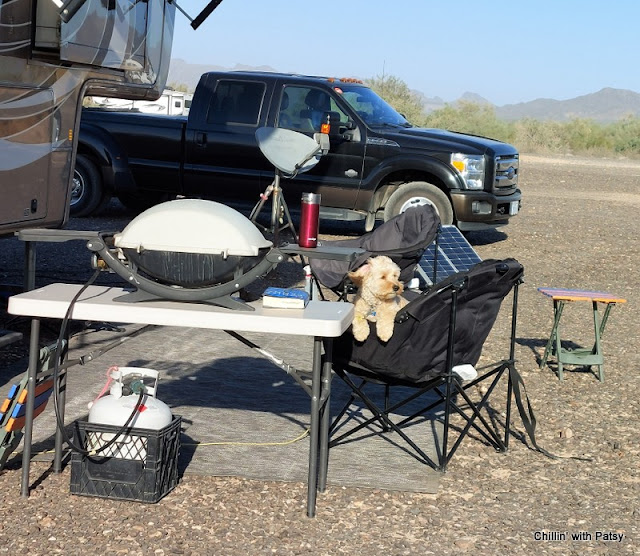 We did dishes and settled in for the night. We read our books until 8 pm when CSI-Vegas comes on. It’s the new one with Grisholm and Sarah on screen again. 😊 I dusted this afternoon, on the mail level, something I think I’ll be doing a lot of and I also Norwex dry mopped the floor. It was badly in need and is much improved. We have had a great day and I’m sure there is another one in store for tomorrow.

Posted by Patsy Irene (Chillin' with Patsy) at 8:20 AM