Some Work, Some Visiting, Some Hangin’ Out

Life on the Ridge

It was 5:30 when I woke, again before my alarm, and then dozed until 6. We got up together and I left for work by 6:15. It was a tad foggy but clear as I got out on the road. Bill had an appointment in Hanover at Speedy Auto Glass to get Black Beauty a new windshield. A stone chip from sometime that neither of us recall, turned very quickly (we think) into a backward ‘j’ smack dab in the middle. Finally, biting the bullet, this morning at 9 he took her in.

I finished at the Laundromat by 8 or shortly after and drove home. I made my tea and relaxed for an hour catching up on blogs. After seeing what our friends were up to, I chatted briefly with 2 sisters and my buddy. I had half of my omelette sandwich from yesterday so fried it up and had that for my breakfast/lunch. Bill would be 2 ½ hours in Hanover and then going directly to help Rob with a roof tear up on his carport. He had cereal before he left and took a sandwich and drinks for lunch.


By 10:30 I was cleaned up ready to go and visit Mom. The temperature is creeping up from the 54F first thing to now 61F. The sun hasn’t had success in breaking through the clouds, not for lack of trying, until now. Almost 11 o’clock and I see some blue patches in the sky. We are all crying, praying and hoping for some sunshine to dry things up and boost our spirits in the meantime. Enough of this dreariness, already!

I left the Suite around 11 and found Mom in her room, in her chair facing the window, sound asleep. So peaceful. When I knocked on the door, she woke slowly and finally realized who I was. Well, realized that I was a familiar daughter at least! We hugged and I suggested a short walk to a room with a table where we could work on a puzzle. That was fun, she was doing quite well and we had fun, which is the whole point.

Before I knew it, it was 12 noon so we had to leave it unfinished and go down to her lunch. She was in very good spirits and chatted with the lady at her table when she sat. She didn’t even need to wave to me a hundred times today, she was happy. 😊 From there I drove to the I.D.A. pharmacy to print off my pictures for Smitty but they no longer have the machine. Hmm. So much for that. I’ll have to do it in Hanover one day.

Bill was already at Rob’s so I drove there and they were just finishing up and ready to take a load of shingles to the dump. I joined my little buddy inside and we chatted until the guys returned. Pat had some egg salad, pickles and buns for lunch and kindly invited us to stay. Yes Ma’am! We haven’t had egg salad since we were on the road so it was a delightful ‘fall from the Keto grace’. The buns, I mean, they were delicious!

Bill left around 1:30 and after Rob digging me up some primrose from Pat’s side garden, I wasn’t too far behind. More flowers to plant and these are perennials so that is even better! Back home Bill had offloaded a purchase I made online from Walmart. The futon mattress arrived 8 days earlier than expected but that was good timing, with Bill being back in Hanover. No charge for shipping and now our guests will sleep even better, I hope!

Inside the Suite, I made a coffee and could easily see that Bill was worn out. Even though not all physical labour, waiting, running errands etc. tires a person out. Sometimes doing nothing has the same effect! He went upstairs with Clemson and I wrote some of this post before going outside to peruse the mattress situation. I was pleased with the thickness of the 6” mattress. I’m sure that is what the old one is/was but has to be close to 10 yrs. old and flattened quite a bit.

The new one will make a big difference and I won’t have to blow up an air mattress when we have company. Not only was it challenging for me, but being vinyl on all sides, noisy and hard to keep sheets on. Bill doesn’t quite agree but he’s never been comfy on a futon where I have.  With that done, I went out and planted some primrose plants. I spread them around the flower beds and then watered them from our rain pails. Not an easy chore but there wasn’t enough rain in our barrel to use the tap.

I moved inside and switched from capris into shorts. Bill came in earlier and opened most of the windows. It was quite warm inside. After naps, some reading and some tv, it was 6 and time to make supper. I had pulled 3 pork loin boneless chops from the freezer and realized these are my least favourite of all the chops on my ‘don’t like’ list. So, the decision to cook them in Madame IP was an easy one.

I browned them in butter on Sauté, removed them while I cooked some onions and mushrooms. Returning the 3 chops on top of the vegetables, I added chicken broth and cooked for 10 minutes. When I removed the lid after a Natural Release for 10 minutes, the smell was overwhelming. Oh my! After sitting for a few minutes, I removed the chops and thickened the liquid. On the side, I put a Caesar salad together and we were eating by 7.

We didn’t see any real sunshine today although were teased a few times. It was warm enough during the day, hanging around 66F/18C. We’ll take it. Supper was good. These loin cops came in a box of mixed meats from West Grey Butchers but live and learn, next time we’ll swap them out for more sausage, chicken or butt chops at least. They’re pretty good doing that for their customers. We cleaned up dishes and there came the sun.

I finished my post and we sat with our books and the tv on in the foreground. This was a great day with a lot of things accomplished. The nice thing is, as I sit here at 8 pm – it doesn’t even seem like I worked this morning. That was a long time ago, it seems.

The prognosis for tomorrow is sounding good with some sunshine earlier in the day. Other than waiting for a delivery of drywall for the Hangar, it will be a nice relaxing day here at home. 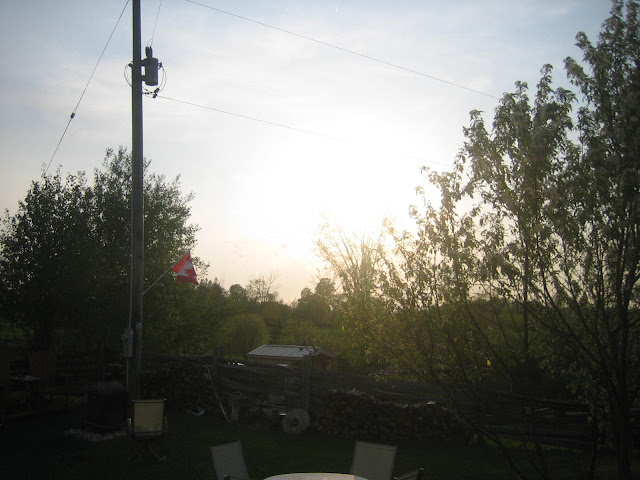 I hope your day was half as good as mine.


Thank you for your visit into our day, we enjoyed having you! (PS - frogs are still singing, nightly. I'd miss them if they stopped).